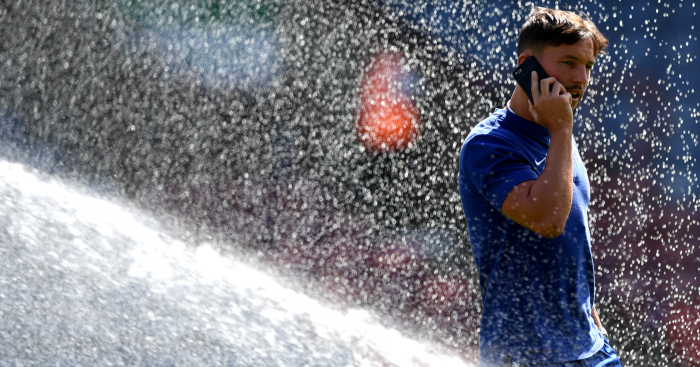 Arsenal, Liverpool and Manchester United players are among those already looking ahead to the January transfer window for a potential move.

While the Premier League campaign remains in its infancy, players are already beginning to establish themselves as part of their manager’s plans.

And that leaves a number of names who are staring at the prospect of a long winter.

In August, The Guardian reported that Drinkwater was holding out for a move abroad, despite interest from West Ham and former club Leicester City.

After joining Chelsea for £35million last summer, the midfielder has made just five Premier League starts for the west Londoners, failing to make a matchday squad to date this term.

The arrivals of Jorginho and Mateo Kovacic have pushed the 28-year-old further down the pecking order, while his problem has been exacerbated by the return of Ruben Loftus-Cheek and Ross Barkley playing his way into Maurizio Sarri’s plans.

Only days after failing to secure a move to the continent, Drinkwater was linked with a January move to Leicester or Southampton by the Daily Express.

Another England international expected to move abroad last month, Forster was heavily linked with a move to Turkey amid interest from Fenerbahce and Besiktas.

A deal failed to materialise, however, and the goalkeeper is firmly down the pecking order at Southampton.

Alex McCarthy ousted an out-of-form Forster last season and has established himself as the No.1 at St Mary’s, while Angus Gunn was signed in a £13.5million deal from Manchester City in the summer and is tipped to be challenging for England honours before long.

Still only 30, Forster still has time on his side to rediscover the form which has seen him win six caps for the Three Lions, but a change of scenery is likely to be on the cards.

Loftus-Cheek is not quite at Drinkwater’s level of struggling to get a look in at Chelsea, but after kickstarting his career on loan at Crystal Palace last term, the midfielder is eager to continue the momentum which earned him a place in England’s World Cup squad last term.

The 22-year-old has been handed just 33 minutes of Premier League football so far this season and reportedly asked to discuss his future after failing to even make the bench against Arsenal.

New Chelsea boss Maurizio Sarri insists the youngster remains part of his plans but has highlighted where the player needs to improve.

“If he will improve more, he is ready to play from the beginning.”

Loftus-Cheek remains in Gareth Southgate’s England squad for the upcoming games against Spain and Switzerland, but should a lack of game-time lead to that changing for the winter fixtures, he could be back knocking on Sarri’s door come January.

It seems oh so long ago that Darmian was playing the full 90 minutes in Manchester United’s opening-day victory over Leicester City.

The right-back spoke publicly about his desire to leave United in the summer, and Jose Mourinho was more than willing to allow the 28-year-old to depart.

Pre-season injuries to Antonio Valencia and Diogo Dalot saw Darmian stay put, but he has not even made the bench since that win over the Foxes, with Valencia having returned to fitness.

The Italy international has been linked with a return to Serie A almost ever since he moved to Old Trafford – expect that to continue in January.

Just look – on the squad list on the official website. He’s actually there. They couldn’t be arsed to photograph him in this season’s shirt, like, but he’s there nonetheless.

See above, except Arsenal have at least let Jenkinson wear the new kit in his squad photo. He’s yet to appear in a matchday squad, though.

“We have Fernandinho and Ilkay Gundogan who can play in this position, and Aleks (Zinchenko) can also play there,” Pep Guardiola said in July when discussing Manchester City’s central midfielder options after missing out on Jorginho to Chelsea.

Guardiola’s words may have been playing on Zinchenko’s mind when he rejected a move to Wolves in the summer, while a move to Real Betis failed to materialise towards the end of the window.

But the 21-year-old is yet to make a matchday squad this term. After being signed as a winger, making a first-team breakthrough as a full-back and now being spoken of as back-up central midfielder, it may be time for the Ukraine international to properly establish himself elsewhere.

If it’s any consolation, it appears he won’t be short of any suitors.