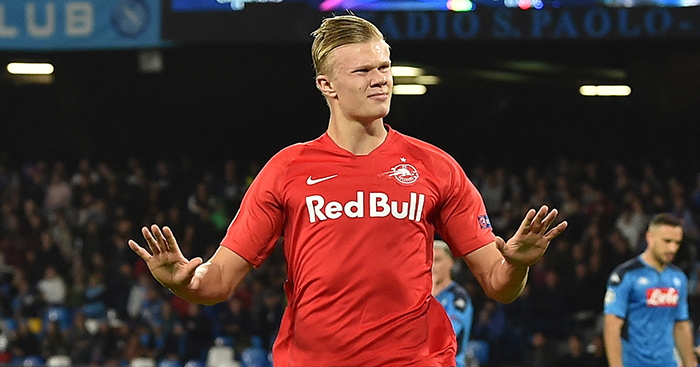 Transfer fees have risen dramatically over the last few years – but there are still plenty of bargains to be found if you look hard enough.

Clubs often make the mistake of putting a low release clause in a players contract only for their value to rise over the next few months.

We’ve looked at seven talented players who can be bought on the cheap in January due to their release clauses.

Haaland is having a remarkable season, and he has scored 28 goals in 22 appearances so the striker is one of football’s most sought-after teenagers.

The striker is valued at around £80million but any interested club can begin negotiations with the attacker if they part ways with £17million due to his release clause.

Red Bull Salzburg are expected to receive multiple bids for him in January with Manchester United, Borussia Dortmund and Juventus all interested in the 19-year-old.

However, Haaland isn’t the only Salzburg player with a cheap release clause.

Minamino has five goals and six assists from just 11 starts in the Austrian Bundesliga, and he impressed against Liverpool in October with a goal and assist in a 4-3 defeat at Anfield.

Jurgen Klopp’s side have agreed to pay the £7.25 million release clause for the 24-year-old and Minamino will join the club in January.

Minamino aced his audition in a thriller at Anfield.

Banega returned to Sevilla in 2017 after an unsuccesful year at Inter Milan but the Spanish side are at risk of losing the midfielder for a second time.

The 31-year-old is an integral part of their team once again and has previously been linked with a move to Arsenal.

He now has an affordable release clause of just £17.7million and that seems like a bargain for any club wanting three years of service out of the evergreen midfielder.

Werner has developed into a world class striker and the 23-year-old has been linked with several top European clubs including Bayern Munich, Liverpool and Chelsea.

The Germany international is flourishing for RB Leipzig in the Bundesliga this season, racking up a remarkable 15 goals in the first 14 games.

Werner’s previous deal was set to expire at the end of the season, but he agreed to sign a new contract which has a low release clause of just £27million.

Pellegrini is one of the best midfielders in Italy, but he has a £25 million release clause included in his Roma contract and it can be paid in two instalments.

However, any suitors will have to act quickly as the midfielder has revealed that he could still sign a new deal with the club.

“We haven’t talked about it yet, but I am very calm. The only thing that matters is that I’m feeling good. When the time comes, we will sit down,” he said.

“We will also talk about removing the clause in the contract.”

While Partey’s £43.5 million release clause may be the most expensive price on this list, but that figure is remarkably cheap for a player of his calibre.

The midfielder is an undisputed first choice starter in Diego Simeone’s team at Atletico Madrid and that’s some achievement.

His performances saw him linked with moves to Manchester United and Arsenal in the summer but surprisingly nobody activated the clause and Partey is still in Madrid.

According to @David_Ornstein, Emery wanted to sign Thomas Partey & the player was 'desperate to join' but #Arsenal wanted to focus on signing a wide player. Emery wanted Zaha because he wouldn't need time to settle, but the club preferred Pepe mainly because he is younger. pic.twitter.com/dEHqRWBGER

Roca caught the eye while playing for Spain’s successful Under-21 European Championship winning side in the summer and has also starred for Espanyol in La Liga.

The deep lying midfielder is highly rated and has been compared to Xabi Alonso and Sergio Busquets, but he has a release clause of just £36million.

The 23-year-old looked set to be heading to Bayern Munich in the summer before the German side pulled out of a potential deal.