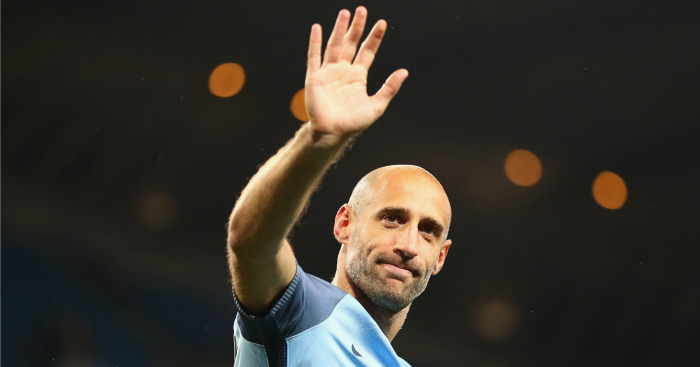 Zabaleta remained at the Etihad Stadium for nine years, winning the Premier League twice, and by the time he eventually left for West Ham in 2017 he had firmly established himself as a City legend.

And we’ve taken a look at just what makes Zabaleta so loved in the blue half of Manchester.

He was an unheralded signing

Joining City on the same day as Glauber Berti (nope, us neither), Zabaleta’s arrival that season was overshadowed by those of Robinho, Jo, Craig Bellamy and even the return of Shaun Wright-Phillips.

Mark Hughes did know what City had on their hands, however: “We feel the addition of Pablo is another great signing. He’s young and a winner.”

Zabaleta even had almost a full head of hair when he joined.

#OnThisDay back in 2008 we signed @pablo_zabaleta 💙

Zabaleta was never short of competition for his favoured right-back spot, but he always managed to fight off his challengers.

He usurped hometown hero Micah Richards; Brazil international and World Cup winner Maicon never stood a chance; and Bacary Sagna had to make do with being rotated.

The heroics in Rome

In 2014, City travelled to Roma needing a result to qualify for the knockout stages of the Champions League.

Missing Vincent Kompany, Yaya Toure and Sergio Aguero, they pulled off a brilliant 2-0 victory, with Zabaleta providing the icing with the second and showing his passion for the club by heading straight for the supporters, kissing the badge.

Zabaleta highlights the goal as one of his fondest memories in a City shirt.

He hasn’t quite got the Manchester music scene

Oasis, The Stone Rose and The Smiths may rule in Manchester, but Zabaleta’s favourite band remains Status Quo.

And we can’t help but love that.

Zabaleta’s farewell appearance for City was his 117th Premier League appearance at the Etihad Stadium, the most of any outfield player for the club.

He scored on *that* day

Any player who was part of the Manchester City team which clinched the club’s first title for 43 years will have hero status, but Zabaleta also has the distinction of opening the scoring in that win over QPR.

Yes, it might have been pretty lucky, and no, it isn’t as iconic as Sergio Aguero’s goal, but it’s still significant in City’s history.

He knew the importance of the rivalry

Citing the FA Cup semi-final victory over Manchester United as one of his proudest moments in a City shirt, Zabaleta bought into the rivalry as much as the most ardent blue.

“I remember at that time Sir Alex Ferguson talking about the ‘noisy neighbours.’ For me, we couldn’t let people say something like that about us.

“I thought, ‘If they call us the noisy neighbours, then let’s make more noise in the city.’

“Let’s prove that we are a club that is looking to achieve ­important things, maybe one day be the main club in the city and take this club forward.”