Arsene Wenger has confirmed he will step down as Arsenal manager at the end of the season – ending his 22-year association with the club.

Wenger’s position at the Gunners has been under scrutiny for a number of years as the north Londoners have failed to challenge for the Premier League titles.

But we’re huge fans of Wenger, and while it may be time to change, we’ll always have a lot of love for the 68-year-old.

It may have soured in recent years – although three FA Cup triumphs in the last four years has at least provided fans with some good days out – but long term Wenger will hopefully be remembered as a visionary figure who helped change English football.

His attitude to training, diet, recruitment and the development of youth players had a huge effect on the rest of the country.

As Jamie Carragher wrote for Sky Sports: “The Arsenal boss has brought more to English football than any other foreign manager.”

Wenger’s achievement can be seen in the fact he built some of the best teams to grace the Premier League era. The Gunners won the Double in both 1997-98 and 2001-02, but his crowning glory will always be the Invincibles. 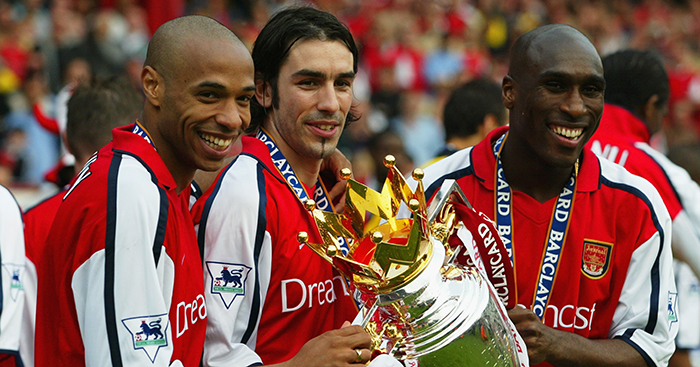 READ: A tribute to Arsenal’s amazing Double-winning team of 2001-02

It’s not just what he has brought on the pitch but also what he has contributed off it – including his steadfast stubbornness not to get a coat with a simple zip.

While Wenger is famed for playing a straight bat to difficult questions – “I did not see it,” has become a catchphrase – he’s also provided us with plenty of funny moments over the years.

During his first press conference as Arsenal boss, he warmed himself to supporters by saying: “I tried to watch the Tottenham match on television in my hotel yesterday, but I fell asleep.”

Or there was the time he showed his rebellious side after being sent to the stands at Old Trafford – made all the better by the fact Mike Dean was the referee.

His skills in training

Compared to some football managers – Roy Hodgson, we’re looking at you – Wenger has been known to display some decent touches in training.

And it’s often heartwarming to see him share a joke with Arsenal’s young players, even if they do manage to dribble past him.

Video: Arsène Wenger jokes around with some of the youngsters in training. [@HaytersTeamwork] #afc pic.twitter.com/GBkapPVZIj

When Wenger does get going in an interview, he can be a thoroughly absorbing, articulate and insightful man.

How many other football managers would you hear muse like this?

“Religiously, it is said that God created man,” Wenger told L’Equipe in 2015. “I am only a guide. I allow others to express what they have in them. I have not created anything. I am a facilitator of what is beautiful in man.”

He’s a big lad, Arsene, and while he generally comes across as an intelligent gentleman, there is definitely an edge to him.

Whether it be Fergie, Pardew, Pulis or Allardyce, Wenger has had spats with them all.

And we’ll always be grateful for this push on Mourinho.

Fergie couldn’t have done this, could he? Just look at Arsene. Exquisite.