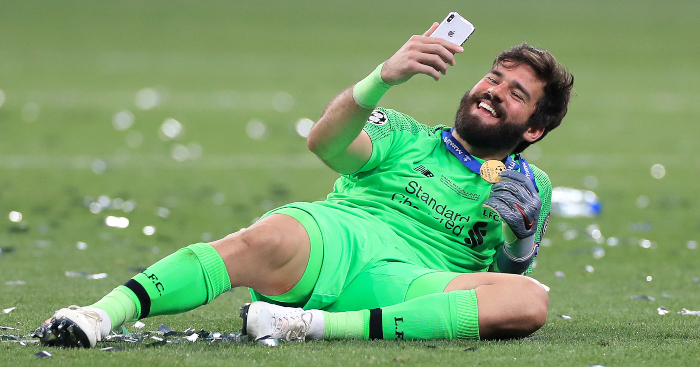 Alisson Becker has enjoyed an incredible season with Liverpool and Brazil – and it shows no signs of stopping any time soon.

Having joined Liverpool from Roma last summer in a then-world record £66.8million transfer for a goalkeeper, Alisson ended his debut campaign at Anfield by lifting the Champions League, and he has now played a key role in helping Brazil to the semi-finals of the Copa America.

– At the time of writing, Alisson has kept a clean sheet in his last nine appearances for club and country combined, going 846 minutes – almost 13 hours – without conceding a goal.

– Despite there being one game of the Copa America remaining, Alisson has already secured the Golden Glove award.

– The goalkeeper played every minute of Liverpool’s Premier League campaign. The last Liverpool stopper to do so was Simon Mignolet in 2013-14, when the Reds came so close to winning the Premier League title under Brendan Rodgers.

– Alisson won the Premier League’s Golden Glove award after keeping 21 clean sheets from 38 games, one more than Manchester City’s Ederson, having conceded exactly one fewer goal than his Brazil team-mate.

– Those 21 clean sheets are the most any Liverpool goalkeeper has collected in a single Premier League campaign – one more than Pepe Reina’s tally of 20 in 2008-09.

– Of all the goalkeepers in the Premier League to make five appearances or more, Alisson’s save percentage of 77.08% was the best in the competition.

– Alisson has played 10 times for Brazil to date in 2018-19, conceding just once. He is yet to taste defeat this season with his country.

– Since completing his move to Liverpool, Allison has kept the same number of clean sheets (35) as he has conceded goals (35).