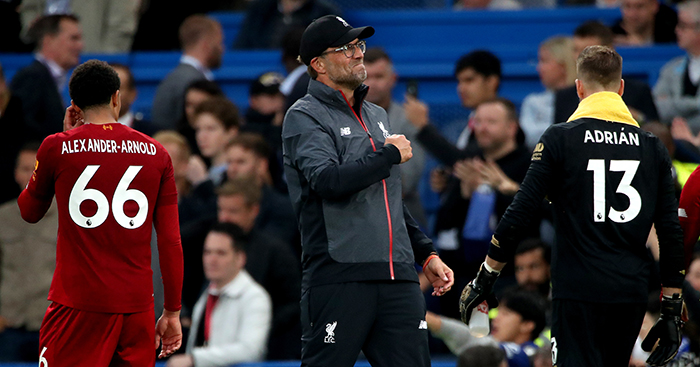 The 2019-20 Premier League table is still only just starting to take shape – but Liverpool are showing plenty of signs they won’t be giving up top spot any time soon.

Liverpool were far from their best in their latest success, a 2-1 win at Chelsea on Sunday, but it represented the first time they have secured back-to-back league wins over the Blues since 2012.

It also moved them two points ahead of their points total from last season’s corresponding fixtures, and although there is still a long way to go, the records continue to stack up.

By winning 2-1 at Chelsea on Sunday, Liverpool extended their perfect start in the Premier League to six wins from six games, becoming the first team in history to do so in successive top-flight seasons.

More importantly, it kept the Reds five points clear of Manchester City in second – a significant gap even at this early stage given the two sides were separated by just one point at the end of 2018-19.

Remarkably, it is now a full year since the table was not topped by Liverpool or City, with Chelsea the last other team to sit in first place on September 22, 2018.

The success at Stamford Bridge extended Liverpool’s winning run to a club-record 15 in the Premier League, while it also marked a new club record of seven straight away wins in the competition.

Only Manchester City have put together a longer winning run in the Premier League having won 18 on the spin between August and December 2017. The Reds will have to beat Sheffield United, Leicester and Manchester United to match that.

Klopp’s men are also now 23 games unbeaten in the Premier League, which is another club record in the competition and their longest unbeaten run in the league since 1990.

Klopp has, of course, been backed by the owners to build a squad capable of consistently challenging for honours, but their perfect start to this season has been achieved in the absence of £56million goalkeeper Alisson.

Indeed, his stand-in, summer signing Adrian, is one of three free transfers to have played a key role for the Reds so far, with James Milner as excellent as ever, and Joel Matip really establishing himself alongside Virgil van Dijk.

Matip in particular was outstanding against Chelsea, once again proving Klopp’s ability to not only spot a player but improve them once he gets to work with them.

Much is said and written about Liverpool’s remarkable front three of Mohamed Salah, Roberto Firmino and Sadio Mané, but one of the Reds’ great strengths is that they are capable of scoring all different types of goal.

Firmino served another reminder of that when he headed in Andrew Robertson’s free-kick, and that followed an earlier set-piece routine which saw Trent Alexander-Arnold smash one in.

It means Liverpool have now scored 34 goals from set-piece situations in the Premier League since the start of last season, at least seven more than any other side.

Klopp more than anyone will be acutely aware that many of these stats are irrelevant until Liverpool can win the title, but the three points at Chelsea made it 92 wins from the German’s first 150 games in the Premier League.

Only Jose Mourinho, with 105 wins, fared better after 150 games in charge in the competition, with Alex Ferguson (90), Kenny Dalglish (85) and Arsene Wenger (84) completing the top five.