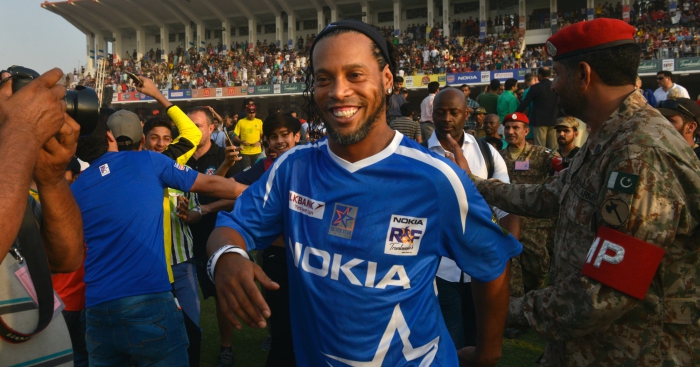 Former Manchester United and Liverpool men provided some of our favourite moments from the footballing weekend, while Ronaldinho had us wishing he could have remained professional forever.

Northern Ireland may have lost out on a place at the 2018 World Cup to Norway, but their former player Gerry Armstrong was certainly excited by their battling second-leg performance.

It’s pretty hard not to love this kind of commentary.

got a bit bored today so I put together a supercut of gerry armstrong praising northern ireland during the last 20 mins of their heroic 0-0 draw. pic.twitter.com/7YcbOEjR6Y

The moment when Gerry Armstrong could no longer keep track of his own logic pic.twitter.com/ZW4YzF9D8o

If you’re not familiar with Dan Leydon’s work already, then you have no excuse not to immediately follow him now.

Leydon is one of our favourite illustrators and he caught our eye yet again with a brilliant thread of work on The King.

I enjoy long romantic walks to the touchline pic.twitter.com/d4eEVrqQFH

And here’s the best football-related photo you will see for quite some time.

Salford City played out an 4-4 thriller against a team consisting of the Class of 92 and Friends.

Jamie Carragher’s lack of match sharpness was there for all to see with some comical defending from the former Liverpool stalwart.

He’s been up to his old tricks again. God we love him.

We took in the glamour fixture of Guiseley vs Bromley in the National League this weekend, which featured a second-minute red card, two penalty saves from the same goalkeeper, a 92nd-minute winner and, most importantly of them all, an excellent non-league dog.

Just imagine the preparation a professional footballer puts into each and every fixture.

There’s the tactical analysis, the fitness tests, the motivation, the warm-up – then imagine conceding a goal after eight seconds.