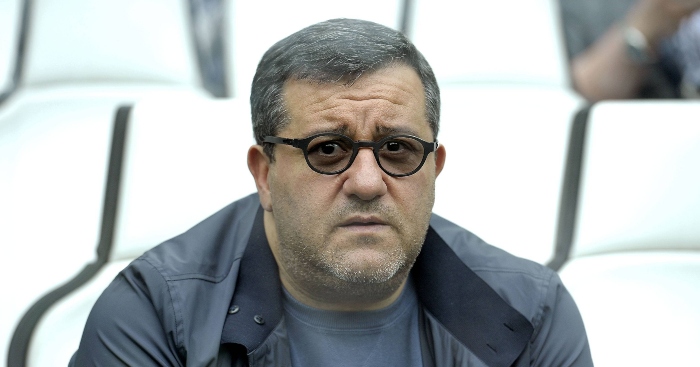 Mino Raiola is never afraid to speak his mind and has become one of the most controversial characters in football.

The 53-year-old has helped broker some of the biggest transfers in football history and represents the likes of Paul Pogba, Zlatan Ibrahimovic and Erling Haaland.

But he has gained as many enemies as high-profile clients during his career, and we’ve looked back at when he has managed to upset some of the biggest clubs in Europe.

After Gianluigi Donnarumma broke into the AC Milan team as a 16-year-old, Raiola wasted no time in trying to engineer him a move out of the club.

The goalkeeper stunned Milan by turning down a new contract in 2017 and the club saw Raiola as the instigator of Donnarumma’s choice to look elsewhere.

“In the end, it was the agent who prevailed,” Milan general manager Marco Fassone told Gazzetta dello Sport.

“I’m convinced that, in his heart, Gigio is not convinced by this decision.

Money thrown at Donnarumma by Milan fans during Italy U21 match. pic.twitter.com/FtufC3CPQT

Madrid president Florentino Perez has never had much time for Raiola, which is hardly surprising given the agent has openly criticised the club.

“I argue with Real Madrid, if it’s necessary,” Raiola told Voetbal magazine in 2020. “I told Florentino Perez once that he uses players like gloves. If he doesn’t like them, he’ll get a different pair. He didn’t like that, but I told him nonetheless.”

“If Real Madrid don’t want Pogba, that’s not a problem,” Raiola told L’Equipe in 2015. “They are a club that are used to buying players like they are washcloths then throwing them into the trash.

“They’re a club who watch a player star in like six matches at the World Cup and buy them. Pogba doesn’t want a club like that. We want Pogba to go to a club that believes in his potential.”

Pogba eventually joined Manchester United instead, but we’ll come to that one later…

Raiola helped facilitate the deal to bring Zlatan Ibrahimoic to Barcelona in 2009 but the striker fell out of favour with Guardiola and was eventually frozen out.

Raiola wasn’t happy with the treatment of his star client and took his frustration out on the manager as well as another Barcelona legend.

“Johan Cruyff can go to hell! He is a nobody,” Raiola told Swedish newspaper Expressen in 2010 after one particular rant from Cruyff.

“He is becoming old and didn’t have the courage to continue his management career as he doesn’t know how to train a modern club.

“Why didn’t Cruyff tell Zlatan that he wasn’t suited to Spanish football before Barcelona signed him?

“I think Cruyff should be in a mental asylum with Guardiola, so they can sit there quietly and play cards together. They would be doing Barcelona a great favour.”

Barcelona responded to the quotes and released an official statement saying they were blocking all pending payments to Raiola and considering taking legal measures against him.

United have plenty of history with Raiola.

The agent was heavily involved in the saga which led to Paul Pogba originally leaving the club in 2012, with Sir Alex Ferguson famously calling the agent a “shit bag.”

Raiola and United looked to have patched up their differences in 2016 when Pogba returned to Old Trafford along with Henrikh Mkhitaryan and Zlatan Ibrahimovic.

However, Raiola has criticised Ole Gunnar Solskjaer’s treatment of Pogba and is now trying to engineer a second transfer away from United for his client.

“Paul is unhappy at Man Utd, he can’t manage to express himself like he wants to and like people expect him to.

“He needs to change team, he needs a change of scenery. He has a contract that will expire in a year and a half, in the summer of 2022, but the best solution for all parties is a transfer in the next (summer) window.”

Raiola – It’s happened many times before . However surely Paul knew he was making this announcement? If he wasn’t aware then we should see a quote from him very soon correcting his agent. Finally to do this ahead of Leipzig and the Man Derby is terrible timing for the Team. 😡

Ibrahimovic isn’t the only eccentric and controversial striker that works for Raiola – Mario Balotelli is also one of his clients.

Balotelli joined Liverpool in 2014 for £16million from AC Milan as the replacement for Luis Suarez but endured a nightmare spell at Anfield.

The striker scored four goals in 28 appearances, returned to Milan on loan and was later made to train with the reserves before signing for Nice in 2016.

“At the end of the day the Liverpool directors admitted Klopp was unfair,” Raiola told La Gazzetta dello Sport.

“I won’t judge him as a coach, even if for me he isn’t a great tactician, but I don’t think he realised we were talking about a person. Mario was exemplary, he never complained even when training alone.

“It’s not enough to say Klopp was unfair: he was a piece of shit.”

But Klopp disagreed with Raiola’s analysis and insisted that they did nothing wrong.

“We did not isolate him,” the manager said. “I’m not interested in things like this. It’s a free world, he can say what he wants. There’s no problem.”

In the early 2000s Raiola looked at tapping into some of the young talent coming out of Ajax, becoming the representative of Maxwell, Mido, Zdenek Grygera and Zlatan Ibrahimovic.

The agent then started to dismantle their talented squad and orchestrated Ibrahimovic’s lucrative move to Juventus in 2004.

Ajax’s ill-feeling intensified two years later when a recorded telephone exchange from 2004 between then Juventus managing director Luciano Moggi and Raiola was released.

“You and Ibra continue to make trouble. Don’t send him to training,” Moggi said.

“Tomorrow, I’ll keep the player at home all day; he won’t show up for training,” Raiola replied. “I then have an appointment with the directors of Ajax at noon, but I’ll come at two …”

The Amsterdam club also accused Raiola of convincing Maxwell and Grygera to not renew their contracts as both moved to Italy on free transfers.

They refused to do business with Raiola for several years until Martin Jol was appointed as their manager in 2009.

Mino Raiola attempted to get Marek Hamsik to leave Napoli and join a bigger European club in 2012 but a move was blocked by president Aurelio De Laurentiis.

“He’s (Raiola) a pain in the backside, who, for years, has been trying to take Hamsik away,” De Laurentiis said.

Unsurprisingly, the agent didn’t hold back and responded in typical Raiola fashion by comparing the president to a fascist leader.

“De Laurentiis threatens his top players,” Raiola told Raisport. “His vision of leadership is similar to that of a dictator. He has the same mentality that reigned during Mussolini’s time.

“Hamsik is a great champion, but sooner or later, if he wants to be a top player, he must move to a team that regularly plays in the Champions League.”

Raiola didn’t get his way on this occasion though as the midfielder stayed put, spending the next seven years at Napoli.