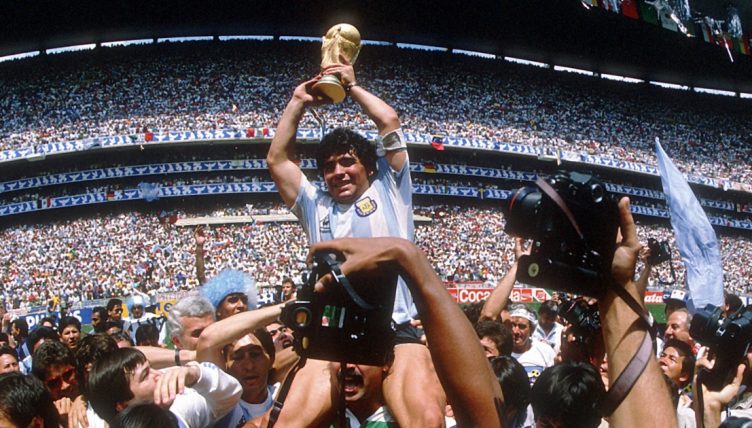 Diego Armando Maradona is without a shadow of a doubt one of the best footballers the world has ever seen.

Lionel Messi and Cristiano Ronaldo may be taking the game to unparalleled levels right now, and many of you may have a soft spot for Pele or Zinedine Zidane, but has there ever been a more enthralling cocktail of skill and debauchery as Maradona? We think not.

Maradona made his first senior appearance for Argentinos Juniors 10 days before he turned 16 years old and netted his first Primera Division goal a fortnight after his landmark birthday.

After only 11 league matches, the Golden Boy was called up to the senior Argentina squad by coach Cesar Luis Menotti, who gave him his first taste of international football as a 65th-minute substitute against Hungary in a friendly at La Bombonera – a  stadium Maradona would call home upon signing for Boca Juniors in 1981.

Despite playing four times in the national team before the 1978 World Cup, Menotti decided that Maradona, aged 17, was too young to handle the pressure of such an important tournament on home soil. Argentina didn’t need Maradona – they won their first World Cup by beating Holland 3-1 in the final.

Instead, Maradona went to the 1979 FIFA World Youth Championship in Japan, where he was awarded the Golden Ball as Argentina again triumphed. He and Lionel Messi are the only players to win the Golden Ball at both the Under-20 World Cup and the real thing.

His first senior international goal came in the same year during Argentina’s 3-1 win over Scotland at Hampden Park.

An 18 year old Diego Maradona scoring his first goal for Argentina in a 3-1 against Scotland at Hampden! ⚽️ pic.twitter.com/4cTX4thNht

Despite missing out on the 1978 World Cup, Maradona went on to play in four other tournaments, starting in 21 consecutive matches for Argentina between 1982 and 1994.

He contributed eight goals and eight assists, with five of each coming in 1986, when Maradona truly stamped his mark on the tournament.

The 25-year-old had been handed the captaincy by Carlos Bilardo, who took what was perceived to be an average squad struggling for form to Mexico.

Former captain Daniel Passarella walked out on the team shortly before the opening game against South Korea, who became the latest in a long list of teams to target Maradona and whatever part of his anatomy they could lay studs on.

But Maradona, by now having moved from Barcelona to Napoli, had grown a thicker skin than that he had four years previously, when his World Cup ended in shame with a red card against Brazil.

The No.10 laid on all three goals in a 3-1 win over the Koreans, before coming up against Italy, who were denied a win by Maradona’s deft equaliser.

A routine win over Bulgaria was followed by a 1-0 victory over Uruguay in the last 16. After beating their neighbours, next up for Argentina were England. And we all know what happened next…

The ‘Hand of God’ should not overshadow the brilliance of what followed just four minutes later. “You have to say that is magnificent!” cried Barry Davies, and indeed it was.

So good, that a similar effort against Belgium in the semi-final gets too often forgotten about.

No one player can carry a nation single-handedly to a World Cup final but Maradona came closer than anyone to achieving that.

In the final against West Germany, his influence was slightly more stifled by Lothar Matthaus, but Maradona still laid on the winning goal with seven minutes remaining after the Germans had just completed their fightback from 2-0 down.

After five years with Argentinos Juniors and another season with Boca Juniors, with whom he won his only Argentine title in 1982, it was inevitable that the European big guns would come calling for Maradona.

Barcelona won the race but only after agreeing to pay a world-record £3million fee – almost double the previous record set in 1978 by Paolo Rossi’s move from Juventus to Vicenza.

After two seasons in Spain that were marred by injuries, illness and controversy, Barca believed it was best to allow Maradona to go to Italy, all the while making a tidy profit on their record buy.

“It’s best for me to leave Barcelona and do so without creating any waves or saying anything critical,” Maradona said at the time.

“I must say, though, that it is only because we are all civilised people that, at one of the meetings with the Barcelona directors, we didn’t come to blows.”

Napoli paid £5million for Maradona, which turned out to be peanuts. One local paper in Naples wrote that despite the lack of a “mayor, houses, schools, buses, employment and sanitation, none of this matters because we have Maradona.”

Napoli were no mugs when Maradona arrived as a World Cup winner in 1986. But they had never won the Serie A title – indeed, no team from the south had – before the 26-year-old rocked up.

Maradona inspired a squad that won 167 Italy caps between them to take the next step and secure their first title, which prompted a week-long carnival in Naples.

This was not the one-man team like history remembers it, but Maradona was undoubtedly the difference, finishing his maiden season in Italy as the club’s top sorer and player of the year.

After two subsequent runners-up finishes, Napoli secured their second and last Serie A title in 1990, just before the World Cup that Maradona was due to defend with Italy as hosts.

By this time, Napoli had strengthened, with Brazil goalscorer Careca joining Maradona in the forward line, and a young Gianfranco Zola tasting glory in his first season with the club. As forward lines go, that’s not too shabby…

Napoli vs Inter 32 years ago today.

Even though Barcelona never saw Maradona’s prodigious talent on a consistent basis, the flashes he offered were enough for Spanish supporters to understand they were in the presence of genius.

Barca’s great rivals Real Madrid also wanted Maradona when he was looking to move to Europe and though he had already signed a pre-contract agreement with the Catalans, there remained work to be done on a deal. In the end, they got their man by paying more than Real were willing or able to.

Maradona and Barca were back at the Bernabeu a year later for another Cop del Rey final, this time against Athletic Bilbao. The two clubs had previous…

Earlier that season, Andoni Goikoetxea, the ‘Butcher of Bilbao’, almost succeeded in ending Maradona’s career with the kind of assault that would see anyone serve time if it was committed on the street.

Goikoetxea, perhaps unsurprising given his nickname, didn’t waste time with faux remorse. Indeed, he claimed to have kept the boot that did the damage in a glass case at his home.

So when the two sides met in the final, and Athletic Bilbao triumphed after kicking Maradona up and down the Bernabeu, the little genius decided to seek retribution.

Disgraceful scenes though they may have been to some, the King of Spain included, to the less sanctimonious of us, Maradona’s pursuit of vengeance only enhanced his legend.

The greatest post-match brawl ever? Maradona at the centre as Athletic Club Bilbao beat Barcelona 1-0 in the 1984 Copa del Rey final. In front of 100,000 in Madrid, a bad-tempered game (Schuster hit by object thrown by fan, threw it back) preceded this.pic.twitter.com/zhe3GyLx6Z

Getting loose with Diego

Maradona, though, played long before sports science was a thing…

16 of the best quotes on Diego Maradona: Messi, Mourinho & Gallagher