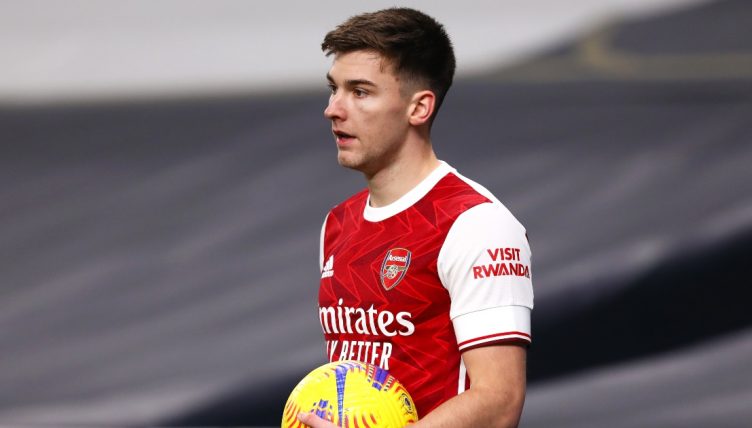 As well as being one of the best left-backs in the Premier League, Kieran Tierney has also shown his leadership qualities during his time at Arsenal.

Despite struggling with injury problems, Tierney has been one of their standout performers over the last two seasons and is already a cult hero among the Arsenal fans.

We’ve looked at seven times where the Scotland international has demonstrated his credentials for the armband.

While most modern footballers carry their essentials in Louis Vuitton or Gucci wash bags, Tierney opted for a cheaper alternative before Arsenal’s game against Sheffield United in June 2020.

He rocked up to Bramall Lane with a Teso carrier bag, proving that he’s not let success get to his head and he’s a very down-to-earth guy.

“He’s exactly what we need,” Mikel Arteta said. “He’s the type of player I love. The Tesco bag is Kieran, he’s a very humble guy and does what he feels is right.”

Big fan of Kieran Tierney carrying his kit in a Tesco bag pic.twitter.com/7kPcNZaEyi

Ahead of Arsenal’s game against West Brom, players on both sides were wrapped up tight in hats, gloves, leggings and snoods for the warm-up.

However, Tierney braved the snowy conditions and sent out the right message by warming up in just a t-shirt and shorts at the Hawthorns.

“It is what it is. Playing in Scotland – I’m used to that – a bit of cold weather. It hurts nobody,” Tierney said after the game.

The weather's no problem for Kieran Tierney 😂 pic.twitter.com/Vh7zabZfdy

Tierney displayed his passion and showed that he’s willing to stand up for his team-mates during Arsenal’s 0-0 draw with Leeds in November 2020.

The left-back was unhappy with Alioski for his role in Nicolas Pepe’s sending off and angrily confronted his Leeds counterpart at full-time.

He had to be dragged away by his team-mates before then going back for more words later.

“Kieran Tierney in the way he reacted at the end of that game, he’s a future captain for our club,” Ian Wright said on his Wrighty’s House podcast.

“Yes we know what Pepe did was silly and he will very much regret that but Tierney could not deal with the fact that a professional done that to another professional player, dived.

“Seeing somebody else talking to him, that really riled Kieran Tierney up, he’s not having that. You look at Tierney, it’s the attitude and the mentality that Arsenal need right now, not enough around him maybe In his eyes have got that.

“That’s why he went and approached Alioski to say to him you’re out of order.”

Video: Kieran Tierney was not happy with Ezgjan Alioski after the full-time whistle tonight.

According to ESPN, several Arsenal stars asked Tierney to tone down his aggressiveness during his first training sessions with the club.

Mikel Arteta, however, is reportedly a huge fan of his attitude and commitment to the cause, urging the left-back to continue training at the same level of intensity.

“Right from the beginning, I could see there was a determination about him,” former Arsenal defender Martin Keown told BT Sport in January 2021.

“He’s just the right type that you need… his personality, character. He’s a driving force and he’s a throwback. In training, they have to tell him to calm down because he’s tackling ferociously. I really like that attitude that he brings.

“He has got everything in his game, it’s about building around him. Perhaps an Arsenal captain in the making.”

After Liverpool beat Arsenal in a League Cup penalty shootout in October 2019, most of the Gunners players looked to make their way off the pitch.

But Tierney led by example, urging his team-mates to go over and thank the travelling Arsenal supporters who had made the trip to Merseyside.

It’s a small gesture but it was definitely appreciated by the Arsenal fans.

Tierney is pure class here – he gets it already 👏👏👏👏 pic.twitter.com/0TFnk7shW5

According to the Daily Telegraph, there are days at Arsenal’s training ground when Mikel Arteta arrives in the morning to find Kieran Tierney already working out in the gym.

The Arsenal manager will also spot him there again when he leaves at the end of the day.

“Since the moment I joined the club I have seen a player with enormous talent with the perfect attitude and commitment,” Arteta said in January 2021.

“He is a joy to work with and I am so happy for him for the way he scored [against West Brom] and everything he has put in to be better every day towards the team, towards the club.

“He had some issues to adapt. It was a challenge for him to leave his house and we are all trying to help him because the kid really deserves this.”

After a selfie was posted from the Arsenal dressing room by their kit man showing Tierney putting his middle finger up, he took to Twitter to apologise and immediately made amends.

A fan replied to Tierney’s apology by suggesting the middle finger could have been for his cancer and the full-back agreed, promising to send him his match-worn shift from the FA Cup victory over Manchester City.

That isn’t the first time Tierney has made a nice gesture as he also surprised a young fan with a signed Arsenal jersey after bullies burned his original.

How could anyone not love this man? pic.twitter.com/UIASJTT636