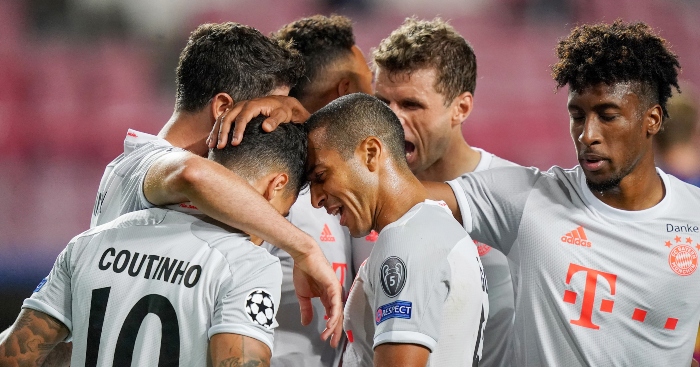 Loanees generally don’t play against their parent clubs, certainly in England, but when they do, things can get slightly awkward – as Chelsea, Manchester City and Newcastle United have all found out.

In England it is generally stipulated that players out on loan are unable to face their parent clubs, although that is often not the case on the continent.

We’ve taken a look at seven times players have come back to bite their parent clubs.

Barcelona spent £142million to sign Coutinho from Liverpool in 2018, but the midfielder failed to justify his enormous price tag at the Nou Camp.

He was sent out on loan to Bayern Munich in 2019 and faced his parent club in the quarter-finals of the Champions League.

The Bundesliga side were already winning 5-2 when Coutinho was sent on for the final 15 minutes, and he rubbed salt into their wounds by providing two goals and an assist.

Things got a little out of hand in Lisbon…

A statement made by Bayern, crisis time for Barca, somehow we've squeezed it all into 60 seconds 👇#Club2020 pic.twitter.com/Ndi85cuVLV

The then-Newcastle striker was shipped out on a three-month loan to Portsmouth in 2004, and the Magpies generously allowed the struggling south coast outfit to field the forward when they visited Fratton Park.

After Newcastle took the lead, LuaLua bagged a late equaliser to lift Portsmouth out of the relegation zone and deal a big blow to Newcastle’s hopes of finishing in the top four.

“I apologise to the Newcastle supporters because they’ve been so brilliant to me, but I’m glad I came to a club where someone wants me,” LuaLua said afterwards. “The Portsmouth fans are lifting me up. I’m here to impress. I’m fighting to get a contract.”

After helping keep Pompey in the Premier League, LuaLua joined the club on a permanent deal in the summer. It would probably have been pretty awkward if he returned to St James’ Park.

Another rare example from England which dates back to 2001, Nielsen left a Wimbledon outfit chasing a play-off spot to join injury-hit Norwich City.

The striker’s second appearance for his temporary club pitted him against the Dons, when he opened the scoring before winning a penalty in the second half.

Wimbledon goalkeeper Kelvin Davies, furious at a man who was still technically a team-mate, was sent off after throwing the ball at Nielson as the game ended in a 2-1 victory for Norwich.

Rodriguez requested a move away from Real Madrid after falling out of favour under Zinedine Zidane, eventually joining Bayern Munich in July 2017 on a two-year loan deal.

As luck would have it, Bayern were drawn against Real Madrid in the semi-finals of the Champions League the following season.

The Germans lost 2-1 on home soil but were given hope in the second leg when Rodriguez made it 2-2 on the night with half an hour remaining – meaning they needed just one more goal to progress on away goals.

While the Colombia international chose not to celebrate, we’re very much into the split reaction in the crowd behind the goal, some of whom applaud the forward, some of whom berate him.

Morientes was an ever reliable goalscorer for Real Madrid, but the arrival of Ronaldo at the Bernabeu saw the striker fall down the pecking order, and he eventually joined Monaco on loan for the 2003-04 campaign.

Los Blancos would come to rue that decision as Morientes came back to haunt his parent club in the quarter-finals of the Champions League.

The former Spain international scored in both legs as the tie finished 5-5, with Monaco progressing on away goals.

To rub salt in the wounds, Morientes ended the season as the competition’s top scorer, helping Monaco reach the final, where they were ultimately beaten by Jose Mourinho’s Porto.

Prior to establishing himself at Ajax, Vertonghen was sent on loan to Eredivisie strugglers RKC Waalwijk in the 2006-07 season.

While the defender would ultimately suffer relegation with the side, he also had a major say in the title race – sadly, for Ajax, it came at their expense.

With four matches of the campaign remaining, Vertonghen scored as Ajax were held to a 2-2 draw at Waalwijk.

The Belgian’s parent club would go on to finish second. On goal difference. By one goal. Oh, Jan.

Celtic signed Roberts on loan for 18 months in 2016 and he went on to score against the Citizens in the Champions League the same year.

In their Champions League Group C match, the young attacker earned the Scottish side a valuable point when he scored the opening goal against City at the Etihad as the game ended 1-1.

The youngster did not hold back in the celebrations, either. He’s still signed to City but was recently on loan at Middlesbrough.

Coman left Juventus to sign a two-year loan deal with Bayern in 2015 and his departure soon left Massimiliano Allegri red in the face.

When the two sides faced each other in the Champions League round of 16, Coman replaced Xabi Alonso in the 60th minute.

He assisted Thomas Muller to nab an equaliser against the Turin giants before bagging the game-clinching goal in extra-time as the Germans triumphed 6-4 in a rollercoaster game.

Talisca joined Besiktas on loan from Benfica in 2016 and came back to haunt his parent club just months later as he scored a stunning free-kick in injury-time to secure a point in a Champions League group game.

After two years on loan at the Turkish outfit, the forward moved to the Chinese Super League to join Guangzhou Evergrande. Benfica will be relieved he’s unlikely to face them there.

Courtois was just a Chelsea player for a couple of weeks before he was sent out on loan to Atletico Madrid in 2011, where he established himself as one of the best goalkeepers in Europe.

In the final of this three seasons on loan in the Spanish capital, the goalkeeper faced the Blues in the semi-finals of the Champions League.

Chelsea had demanded a fee to allow Atletico to field Coutois, but UEFA overruled and allowed the Belgian to feature as Diego Simeone’s men were 3-1 victors.

Eight players who went out on loan before PL success: JT, Rio, Beckham…

Where are they now? Schalke’s 2011 Champions League semi-finalists