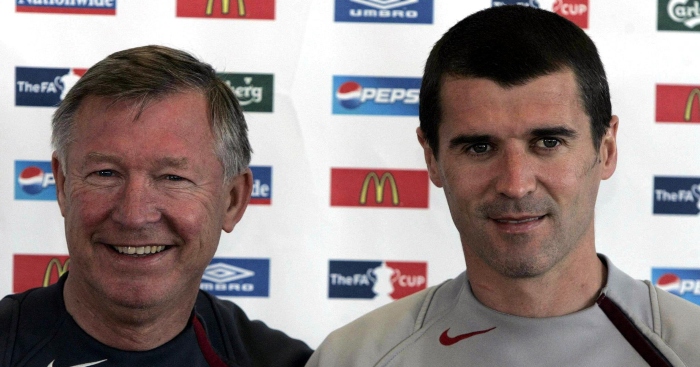 Sir Alex Ferguson was famous for his man management skills at Manchester United – but the Scot could still lose his temper at any moment.

The manager was never afraid to speak his mind and clashed with several of United’s big name stars during his 27 years at Old Trafford.

Here are seven United players who have all felt the wrath of Ferguson and his infamous hairdryer treatment.

Ferguson and Keane are two of the biggest characters in football and eventually their personalities clashed.

The midfielder sent shock waves around Old Trafford when slagging off his team-mates during an interview with MUTV after an infamous 4-1 loss to Middlesbrough.

Ferguson showed no mercy by stripping him of the captaincy and that interview ultimately signalled the end of Keane’s United career.

Time hasn’t healed any wounds and they have both reignited the feud by criticising each other in the media on several different occasions.

“I wouldn’t forgive Ferguson,” Keane told Off The Ball in 2019. “The media spin, how I apparently upset everybody, it was all nonsense.

“Ferguson came out afterwards and said he always did what was best by Manchester United. Nonsense.”

🎥 From the ITV Sport vault 🎥

"Just because Alex Ferguson says it doesn't mean it's the truth."

Stam enjoyed incredible success in his three years at United, winning the treble and a hat-trick of league titles, but that didn’t stop him falling foul of Ferguson.

The manager was reportedly enraged by Stam’s autobiography, in which he claimed that he had been poached by United and Ferguson had ordered his players to dive in European matches.

Unsurprisingly, the defender was shipped off to Lazio a few weeks later.

The pair originally had a father-son-like relationship as Beckham rose through the academy to become a key part of Ferguson’s United team.

However, the United manager had grown tired of Beckham’s celebrity lifestyle and felt that it overshadow his job as a professional footballer.

In the wake of a 2-0 FA Cup fifth-round defeat by Arsenal in February 2003, an enraged Ferguson kicked a boot in the dressing room and it struck Beckham just above his left eye.

While most managers would apologise, Ferguson was furious with Beckham because the story had been leaked to the media.

“The next day the story was in the press,” Ferguson said in his 2013 autobiography. “In public an Alice band highlighted the damage inflicted by the boot. It was in those days that I told the board David had to go.”

The midfielder was shown the door and signed for Real Madrid at the end of that season, but Ferguson and Beckham have bore no grudges.

👟💥 #OnThisDay in 2003, Sir Alex Ferguson took his hairdryer treatment to another level…

When Arsenal beat Man Utd 2-0 at Old Trafford, Fergie decided to take his anger out on a nearby football boot, colliding with David Beckham's face! pic.twitter.com/fjvyw2hTyv

Rooney may be United’s all-time top goalscorer but the striker still had a number of high-profile bust-ups with Ferguson during their nine years working together at Old Trafford.

Their relationship looked beyond repair when Rooney famously handed in a transfer request in 2010, but they eventually sorted things out.

However, one of Ferguson’s last acts as United boss was to reveal that Rooney had once again asked to leave the club in 2013 – a claim denied by the player.

Schmeichel left the club in 1999 after helping them win the famous treble, but his United career was almost over five years prior to that.

The goalkeeper was effectively sacked in 1994 after a massive row with Ferguson following a 3-3 draw with Liverpool, and he instructed his agent to find him a new club.

“There was nothing I could do about the goals and I played really well,” Schmeichel said. “But after the game he came straight at me because my goal-kicks had been straight up the middle and Neil Ruddock had been heading them straight back.

“I didn’t think that was fair. We ended up having a massive, massive row. The more we said to each other the worse it got.

“Obviously I stepped over the line. The next day, I was called in and he said, ‘Listen, I have to sack you. I can’t tolerate my players speaking to me like that. It goes against my authority.’”

Luckily for United fans, the pair patched up their differences the next day and Schmeichel won a further four Premier League titles at Old Trafford.

Ince was key part of Ferguson’s first great United side, but he demanded to be called ‘The Guv’nor’ by his teammates and his ego irritated the manager.

They had a frosty relationship and Ferguson blamed the former England captain for a 4-0 Champions League defeat against Barcelona in 1994.

Sir Alex subsequently sold Ince to Inter Milan a few months later and when he returned to the Premier League with Liverpool, his former manager famously branded him a ‘big time Charlie’.

😳 “I beat one, beat two, and then lost it and Norwich nearly scored a goal…”

😡 “I square up to Fergie. There’s all spit going in my eyes and mouth…”

Van Nistelrooy finally moved to United in 2001, and he became one of the most prolific strikers in their history, scoring 150 goals In 219 appearances.

But it all turned sour by 2006 when Ferguson left him out of United’s League Cup final success over Wigan and the pair had an explosive confrontation.

“I called him a number of things in a blind rage,” Van Nistelrooy told Eleven Sports in 2019. “Cocky and stubborn as I was, I couldn’t snap out of that for some time after.

Ferguson was furious and the Dutch forward was sold to Real Madrid that summer, although Van Nistelrooy did apologise to the manager a few years later.