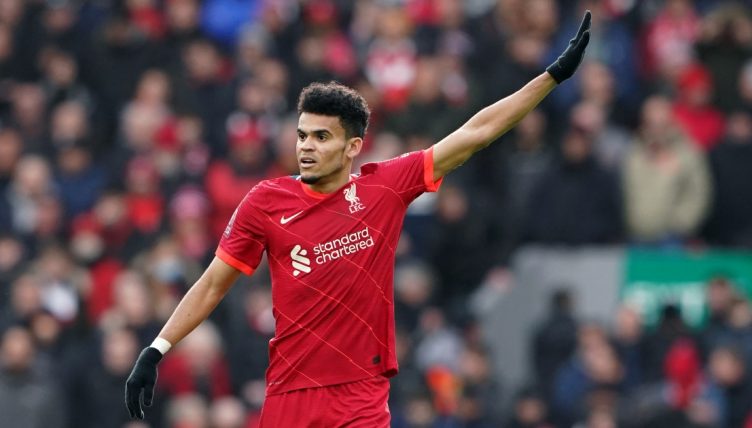 The 2020 Premier League champions weren’t planning on dipping into the January transfer window but, when long-term target Diaz became available, Liverpool swiped the Porto winger from under Tottenham’s noses.

After making his debut as a substitute in the FA Cup win over Cardiff City, the £37million signing made his first start on the left of a front three in place of Sadio Mane, who has just returned from the African Cup of Nations.

The Colombia international made an eye-catching start to Premier League life and was only prevented from opening his goalscoring account through the goalkeeping heroics of Kasper Schmeichel.

“We were drooling over him after about 15 minutes,” said Michael Owen on BT Sport. “Don’t get me wrong, he hasn’t done anything where you think ‘wow, he’s created an unbelievable chance’ but I love how sharp he is.

“He looks quick, he looks lively, he presses the ball, he doesn’t mind committing players and running at them and beating them.

“I think he looks like a Liverpool player, he really does look like he’s going to fit into this team like a glove. Brilliant player and like I say already in his short, fleeting appearance so far, he looks like he suits that red shirt.”

– Diaz completed eight dribbles during his 89 minutes on the pitch, the most of any Liverpool player on the night.

– The Colombia international took four shots during his Premier League debut, two of which were on target. Although he didn’t score, it was the joint-most registered by a Liverpool player.

– Leicester may not have the strongest defence in the Premier League right now but it was still impressive that Diaz emerged victorious from eight duels against his opponents.

– And the forward completed five take-ons against a side that struggled to contain him all night long.

– The 25-year-old enjoyed nine touches in the opposition box. To underline Liverpool’s dominance, that was only the third-highest total registered by one of their players.

– Diaz enjoyed a pass accuracy rate of 91%, which is extremely high for a forward that isn’t afraid of taking on defenders with his direct running and footwork trickery.

– Liverpool’s new £37million signing pumped four crosses into the Leicester penalty area – a savvy tactic given their defensive woes this season – and created one chance through his persistence.