Simeone’s cojones were embodied by Godin and Gimenez against Juventus 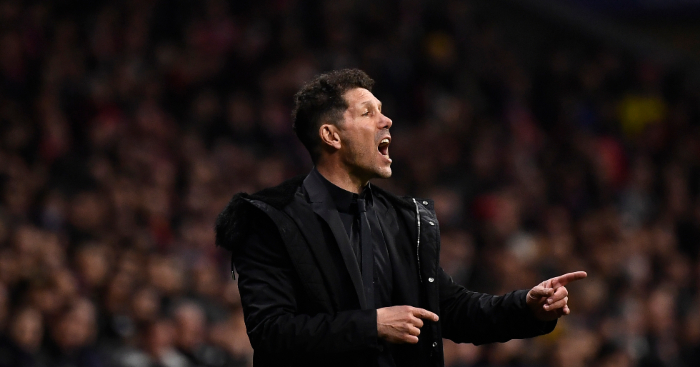 Atletico Madrid‘s performance in the 2-0 win against Juventus was typified by Diego Simeone’s celebration for their opener.

Turning to the crowd and grabbing at his crotch after Jose Maria Gimenez’s goal, the message was clear: this team has big f*cking balls.

“It’s not a nice gesture, I admit, but I felt the need to do it,” he explained. “I did it as a player at Lazio and I did it again to show our fans that we have cojones. I can only apologise if anyone was offended.

“It wasn’t aimed at the other team, I was turning towards our own supporters.

“There are many things that can be won in football, but what will always remain are the memories of playing in a competitive team, and that is the most healthy and beautiful thing that can happen to an athlete.”

Talking about the family jewels is one of the game’s great, long-standing traditions. Pep Guardiola‘s has praised John Stones’. Troy Deeney famously accused Arsenal of lacking them. They’d deserve a double-page spread in any footballing dictionary.

Simeone’s cojones comment could apply to the entire team, front-to-back. But the two most outstanding, courageous players were Gimenez and Diego Godin. Not only did they shut down Paulo Dybala and Cristiano Ronaldo to keep a clean sheet, but they both scored in the 2-0 win.

Nobody personified Diego Simeone’s cojones celebration more than the Uruguayan central defensive pairing. And if you really want to extend the metaphor, they represent one bollock each.

Both sides have been on the losing end of two Champions League finals each in recent years, but it was Juventus that came into this tie as favourites.

Not only do they boast an experienced defence to match Atletico’s, but in Ronaldo they added a player many thought would take them one step closer. As he went to great lengths to remind Atletico, he’s won five already and is the all-time top scorer in the history of the European Cup.

But while the Portuguese broke records in nine years at Real Madrid, becoming their all-time top scorer, more often than not he was left frustrated against their city rivals Atletico, especially once Simeone took over and completely transformed the defence.

Last night was no different. Gimenez made eight clearances, two interceptions and one tackle. Godin was less busy, with just one clearance and two tackles, but was positionally astute as he helped reduce Juventus’ considerable strikeforce to limited shots at goal.

.@Atleti defender Jose Gimenez pips Lionel Messi as our Champions League player of the week after scoring in a 2-0 win over Juventus

Denying Juventus a key away goal was huge, and in doing so they gave themselves a massive chance of knocking out the pre-season favourites.

Stepping up when needed

It would have been easy for Simeone’s men to allow fatalistic thoughts in, succumbing to the idea it wasn’t to be their day. But they didn’t.

Diego Costa and Antoine Griezmann had already missed good chances to open the scoring in the first half, while a swift, correct use of VAR downgraded a penalty to a free-kick after replays showed a foul on Costa was outside the box.

And it all felt a bit familiar for Atletico and Alvaro Morata when VAR intervened to deny them an important goal.

It was only a couple of weeks ago that the Chelsea loanee was denied by video replays in the Madrid derby, a goal that would have made it 2-2. In the end, it was deemed Morata was offside by the tiniest of margins, and Real went on to win 3-1.

On this occasion, a light push on Georgio Chiellini was the reason for disallowing the goal. But this time, Atletico didn’t wilt. They appeared galvanised, scoring two goals from their two centre-halves that were impossible to contest.

Gimenez converted the first, as he was first onto a loose ball after Morata headed it down from a corner. The second was a similar story: a set-piece, a loose ball, a quick-thinking finish.

Leonardo Bonucci and Chiellini are revered defenders that rightly have reputations that place them among Europe’s best defenders, but on this occasion they were bested by their opposite numbers.