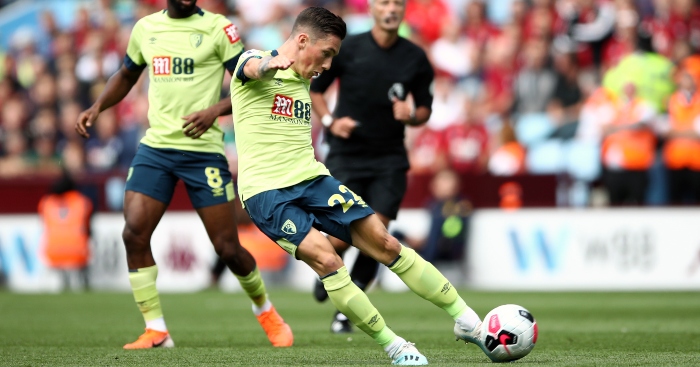 Harry Wilson has quickly made a name for himself as one of the best shooters from long range in England football – and the Liverpool loanee is continuing to live up to his reputation at Bournemouth.

No player in England has scored more than the 11 Wilson has bagged from outside the box since the start of 2018-19, which he spent on loan at Derby County.

We’ve rounded them all up, because they’re awfully fun to watch.

After opening his account for Derby three days earlier, Wilson well and truly set tongues wagging with this free-kick at Old Trafford.

What a hit from Harry Wilson vs Manchester United tonight💥 pic.twitter.com/VO4LV6J81e

Derby soon knew they had something special on their hands.

That sound when it hits the net. 😍@HarryWilson_ vs. West Brom in October… 🚀#FridayFeeling pic.twitter.com/9FFB9GkIeU

And Wilson soon became all too aware of his talents.

⚽ vs. Birmingham City
❌ vs. Aston Villa
⚽ vs. Sheffield Wednesday
⚽ vs. Stoke City@HarryWilson_ has scored three goals in his last four games! 🤩 pic.twitter.com/jBp1CJogFs

He makes leathering one in from 30 yards look far too easy.

He doesn’t have to smash every one though.

And Harry Wilson strikes another for Derby against Swansea. 6 goals in his last 6 games 🔥 pic.twitter.com/AtnlwcE0d6

You know a free-kick is good when it starts a scrap.

Derby are level at Sheffield United as Harry Wilson's free kick then sparks a row in the goalmouth.

Watch live on Sky Sports Football or six other games on the red button https://t.co/iiheEniQig pic.twitter.com/w2YeCJqZnm

A tip: don’t give away a free-kick anywhere near your box when Wilson is on the pitch.

Harry Wilson scored his 8th goal from outside the box this season against Southampton.

That’s four more than any other player in England’s top four divisions 🔥 pic.twitter.com/S9ThaqUBZk

It only took one game for Bournemouth.

What were we saying about free-kicks?