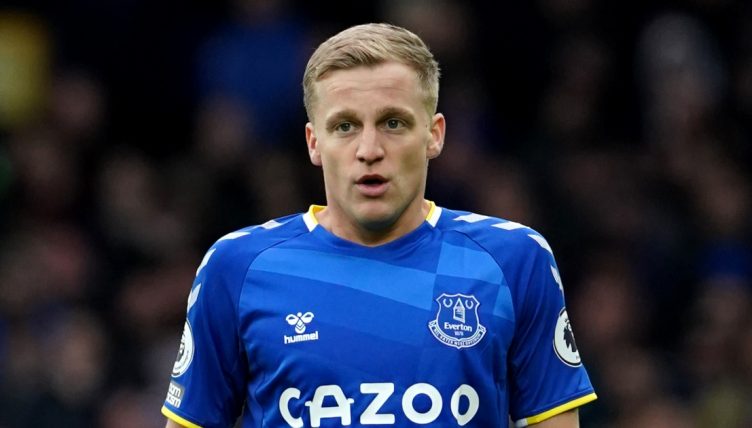 Van de Beek was starved of opportunities at Old Trafford, with both Ole Gunnar Solskjaer and Ralf Rangnick both choosing not to use the midfielder.

The Netherlands international chose to make a temporary move to Everton, rejecting Crystal Palace in the process, and vindicated Frank Lampard’s faith in him with a Man of the Match performance at Goodison Park.

“I thought Donny van de Beek was great,” Lampard told BBC Sport after the game. “To play like that at home – his calmness, work rate and intelligence was great.”

The 24-year-old was brilliant from the start, working hard in the middle of the park and linked up well with his team-mates.

And we’ve collected six amazing stats from that underline his influence on his first Premier League start for Everton.

– Van de Beek scored a pass accuracy rate of 89.5% and created one goalscoring opportunity with a key pass against Bielsa’s Leeds.

– The midfielder won three aerial duels against his opponents, the most of anybody on either side.

Seeing van de beek producing magic like this at everton and then looking at the clowns in our midfield makes me sick pic.twitter.com/THXUui5rZb

– He also recorded the most tackles (four) and won the most possession in the middle third of the pitch (six times).

– Van de Beek international made one crucial interception that broke down a promising Leeds move, highlighting his versatility.

– He also recovered the ball 10 times, recycling possession and keeping Everton ticking over from his central midfield role.

– And Van de Beek enjoyed just 51 touches of the ball during the match, showing how economical the midfielder can be in possession.