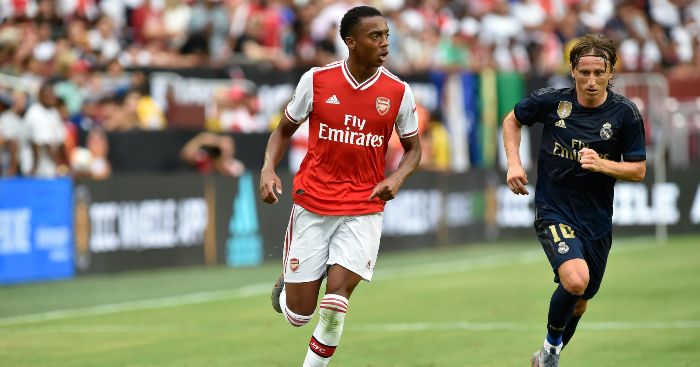 Arsenal have enjoyed a quietly promising pre-season to date with a number of exciting young players catching the eye – but have they done enough to force themselves in Unai Emery’s first-team plans?

The Gunners have won three of their five friendlies so far, beating Colorado Rapids, Bayern Munich and Fiorentina, drawing with Real Madrid (albeit losing on penalties) and losing to Lyon.

We’ve taken a look at five players who have impressed ahead of the Arsenal’s opening Premier League fixture against Newcastle United on August 11.

The big winner of Arsenal’s pre-season to date, Willock has already played 17 times in all competitions for the Gunners, scoring three times.

Having replaced Mesut Ozil during the second half of the Europa League final defeat to Chelsea, Willock has continued to apply pressure on the Germany international with some impressive showings as a No.10 in Arsenal’s friendlies.

“It’s all progress with him because last year he started with us in the pre-season,” Emery told Arsenal’s official website when discussing the 19-year-old. “His performance today is very different to last year, maybe because he knows our idea and spirit better.

“He’s got a very big motivation and a very big ambition individually to make good performances, and he listens a lot to our idea. We are speaking a lot to him individually, with Carcedo, with me.

“I really, really think that he made one more step last year during the season and he finished it very well with us, playing 12 minutes in the final against Chelsea with a big performance. We now want him to take another step more in his capacity to be with us, with a big help in our performance and our idea.”

Nketiah was forced to be patient at the Emirates last term. After Danny Welbeck suffered a season-ending injury, plans were shelved for Nketiah to leave on loan, only for the forward to be firmly stuck behind Pierre-Emerick Aubameyang and Alexandre Lacazette in Emery’s pecking order.

But the striker has made a convincing case to be involved more next term with a late winner against Bayern Munich and a brace against Fiorentina.

Lacazette limped out of Arsenal’s loss to Lyon at the weekend, and though he is expected to be fit for the start of the campaign, Nketiah has proven to Emery that he may not have to gamble on the Frenchman’s fitness.

After such an exciting start to his loan spell at Hoffenheim last term, a relatively underwhelming second half of the campaign may not necessarily have been a bad thing for Nelson, around whom the hype has gently subsided.

The attacking midfielder still showed his quality as one of Arsenal’s best performers against Lyon alongside Willock, and the 19-year-old is expected to be handed opportunities by Emery.

Part of the evolution of Arsenal over the summer has seen Freddie Ljungberg promoted from Under-23s boss to work with the first team. In pre-season, the previously unknown Burton has been used as an example of the benefits of Ljungberg stepping up to work alongside Emery.

“We worked last year with Steve Bould, Freddie with the Under-23s,” Emery said earlier this summer. “We changed because for them it was a good option.

“With Freddie we are working. Above all he’s helping us with the young players because he knows better than us every young player.

“For example Robbie [Burton], I didn’t know Robbie. Freddie said to me he’s a good player with the capacity to play as a six or eight. Really he helped us like we needed.”

The 19-year-old impressed as a substitute against Bayern Munich and has appeared in each of Arsenal’s friendlies so far.

Arsenal’s first signing of the summer, Martinelli scored on his first appearance for the club against Colorado and has continued to be involved throughout pre-season.

The 18-year-old forward also had the ball in the back of the net against Lyon, only to see his effort ruled out for offside.