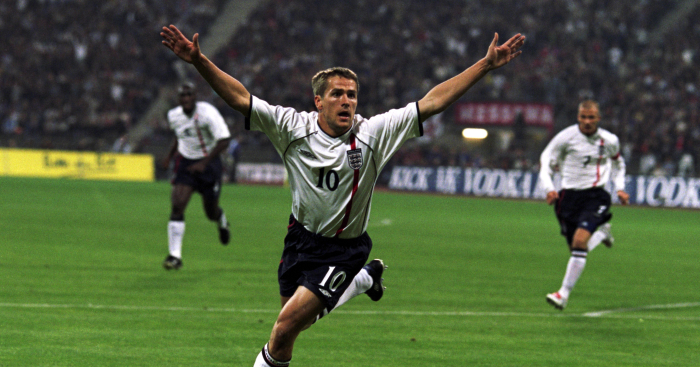 We should know better than to get carried away by one-off England results – but sometimes we just can’t help ourselves.

England’s history since 1966 will tell you they have fluctuated between abject failure and painful heartbreak, but what’s the point of being a football fan without hopeless optimism?

We’ve looked back at six England results since the turn of the Millennium which have made us all a little bit giddy.

It’s Neville to Cambell, Cambell to Rio, Rio to Scholesy, Scholesy Gerrard, Gerrard to Beckham, Beckham to Heskey, Heskey to Owen, to nod (?!), 5-1!

When England went 3-0 up against Spain, Henry Winter suggested it was the best half of football they had played since beating Denmark at the 2002 World Cup.

The Three Lions marched into the quarter-finals thanks to first-half goals from Rio Ferdinand, Michael Owen and Emile Heskey.

“I’m not bothered if we get Brazil or Belgium,” captain David Beckham boldly declared afterwards. “I want to play the best team and the best players.”

Hindsight suggests it might have been better had they played Belgium.

England had already bounced back from snatching defeat from the jaws of victory in their Euro 2004 opener against France by beating Switzerland 3-0.

Needing a result to secure qualification to the knockout stages, Wayne Rooney bagged a second consecutive brace, while Frank Lampard and Paul Scholes were also on the scoresheet.

“I don’t remember anyone making such an impact on a tournament since Pele in the 1958 World Cup in Sweden,” Sven-Goran Eriksson gushed about the teenage Rooney.

Eriksson went on to warn the rest of the tournament, telling the BBC: “If we play as we did in the first half it will not be easy to beat us.”

England were promptly beaten on penalties by Portugal after Rooney had to be taken off due to an injury.

England faced an Argentina side featuring the likes of Javier Zanetti, Juan Roman Riquelme, Esteban Cambiasso, Carlos Tevez and Hernan Crespo in Geneva aiming to test their credentials ahead of the 2006 World Cup.

Eriksson deployed Ledley King as a holding midfielder while Luke Young, Wayne Bridge and Paul Konchesky all appeared at full-back at various stages of the game.

The Three Lions trailed 2-1 late on before Owen equalised in the 87th minute – just watch little Sammy Lee’s big celebration – and the then-Newcastle striker went on to bag a winner from Joe Cole’s cross in injury time.

Even Alan Hansen got carried away, telling the BBC: “What a fantastic game, I thought England had just won the World Cup.”

Maybe we’re being harsh, but we can’t actually remember many exciting England performances between 2008 and 2016. Euro 2008 qualification was ultimately a disaster, the World Cups of 2010 and 2014 were abysmal and Euro 2012 was extremely *Alan Partridge shrug*.

But then just before Euro 2016, the Three Lions traveled to Berlin to face the reigning world champions. The game promptly followed the script as Germany led 2-0 at the hour mark.

We’re not quite sure what changed, but England suddenly became…good. Harry Kane pulled one back with a neat Cruyff turn, Jamie Vardy scored a f*cking back-heel and Eric Dier headed in an injury-time winner.

Then Iceland went and sh*t on our dreams.

We know not to get carried away by now, but then Gareth Southgate guided England to the semi-finals of the World Cup. Of course, that ended in the comforting pang of painful heartbreak, and we were fine with that – the Summer of Love was over.

A defeat to Spain at Wembley put England back in their place, followed by a turgid draw in Croatia. Lovely, acceptable, indifferent mediocrity.

But then they were 3-0 up at half-time in Spain. Raheem Sterling ended his goal drought. Jordan Pickford turned into Andrea Pirlo. Eric Dier leathered Sergio Ramos.