Six months of Rafa at Everton: What happened next at his previous clubs 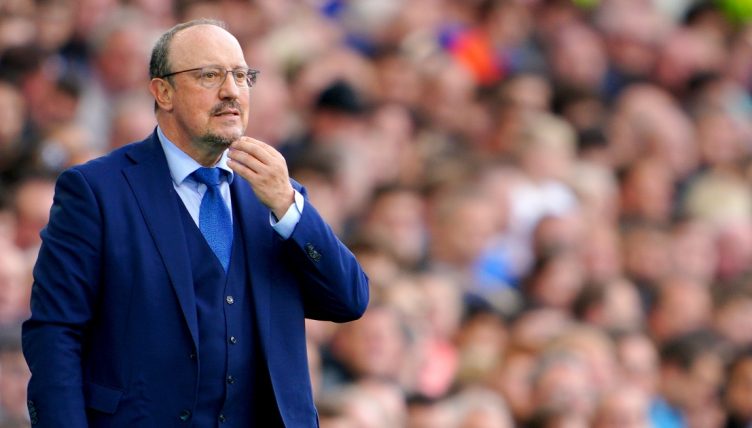 Rafa Benitez continues to come under scrutiny over his start to life at Everton – but how has the Spaniard started at his previous clubs, and how has he gone on to build from that?

After a good start to the season, picking up wins against Southampton, Brighton, Burnley and Norwich, Everton’s form has slumped massively and there is ever-growing hostility from Evertonians, many of whom did not want the former Liverpool manager in the first place.

Six months into his reign the Toffees are 15th, with six points from their last 12 games, a League Cup exit to QPR, and a shaky extra-time win over Hull City in the FA Cup leaving the Spaniard as the bookies’ joint-favourite to be the next Premier League manager to be sacked.

But does he deserve more time to stamp his mark on the club? Here’s how he fared in every one of his previous clubs since Valencia – and what he went on to achieve.

When Benitez took the helm at Valencia in 2001, he did not have the club’s full backing. He was their fourth choice, and only had limited success at that point, gaining promotion to the Spanish First Division with Extremadura and Tenerife but failing to achieve anything notable at Osasuna Primera or Valladolid.

In the league, a third-place finish in 2000 was followed up by failing to qualify for the Champions League, ending the 2000-01 season in fifth. The club turned to Benitez to end their 30-year wait for a title.

But the first six months of Rafa’s reign were disappointing: after 17 league games the club had only scored 19 goals and were eighth in the table – far from the high expectations of Valencia’s fan base. Benitez was on the brink of losing his job, after gaining just 17 points from a possible 51.

With Barcelona, Real Madrid and Deportivo dominating the league, Valencia’s title hopes were written off by bookies and fans alike, with Rafa’s departure looking inevitable.

Incredibly, a 3-2 comeback win away at Espanyol not only saved Benitez’s job but began one of the greatest league title comebacks in Spanish domestic history.

In the remaining 21 games of the season, Valencia won 15, ending the season as league winners, seven points clear of second-place Deportivo.

Valencia conceded just 27 goals across the entire season, credited to a switch from a 4-4-2 diamond to a compact 4-2-3-1, with two defensive midfielders and two wingers.

After being one game away from losing his job, Benitez’s side became the third team in 17 seasons to trump Barcelona and Real Madrid’s domination of the Spanish First Division. He went on to win the league again in 2003-04. 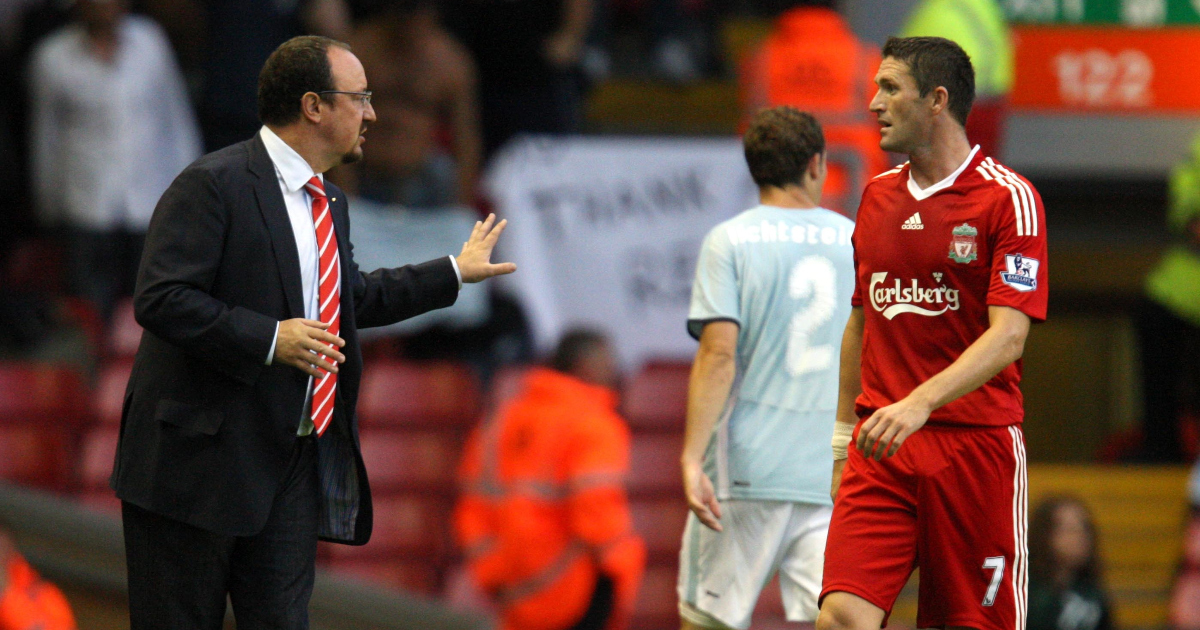 After his success in Spain, Rafa made his first move to Merseyside, taking over from Gerard Houllier in 2004. Liverpool had clinched a Champions League spot in the previous season, finishing in fourth place, but had failed to win any trophies.

Rafa’s first task was to keep hold of Liverpool’s best players. He convinced Steven Gerrard to sign a new contract, who was being linked with a big-money move to Chelsea. Michael Owen, however, he was not able to keep – and he was sold to Real Madrid.

He responded with two key signings of his own, bringing in Luis Garcia from Barcelona and Xabi Alonso from Real Sociedad, who would become key players.

But his first six months were, once again, unremarkable, with just seven wins, four draws and six defeats from his first 17 games. It left the Reds in sixth place, 15 points adrift of league leaders Chelsea.

Their inconsistent league form continued in the second half of the season, losing 11 of 19 away matches and eventually finishing fifth, immediately behind Everton – as well as losing the League Cup Final to Chelsea.

But in the Champions League, it was a different story. After beating Juventus and Chelsea in the knockout stages, Liverpool reached the final…and we all know what happened next.

He went on to win the UEFA Super Cup later in 2005 before adding the Community Shield and FA Cup the following season.

Speaking back in December, Rafael Benitez and @Carra23 detailed just how Liverpool came back from three goals down against *THAT* AC Milan side…🔥pic.twitter.com/IvVOgNNs0M

He was unable to deliver any more silverware at Anfield, however, and after six years with Liverpool, Benitez joined Inter Milan in June 2010.

Inter were considered one of the world’s best sides, winning the Serie A and the Champions League in the previous season under Jose Mourinho.

They had an array of star players such as Wesley Sneijder, a young Phillipe Coutinho, Esteban Cambiasso and Samuel Eto’o among their ranks. However, Benitez couldn’t bring success to the San Siro as he did at his previous two clubs.

Benitez got off to a good start, winning the Italian Super Cup 3-1 against Roma, but then went on to lose the UEFA Super Cup a week later, losing 2-0 to Atletico Madrid.

Domestically, given the calibre of his squad, his first six months at Inter was largely a failure.

In December 2010 his side sat sixth, 13 points off the top of the table, after suffering consecutive defeats against rivals AC Milan – ending a 46-match unbeaten home record.

Despite struggling in the league, Benitez guided Inter to win the FIFA Club World Cup in the same month, giving him the confidence to issue an ultimatum to Inter’s ownership, asking them to back him in the transfer market with new players or for them to consider his role as manager.

As a result, Benitez was sacked just five days after lifting the trophy.

Wesley Sneijder 🗣 “Samuel Eto'o was playing on the right wing for Mourinho. Benitez arrived (at Inter) and asked him to play on the left wing. Samuel replied, "No, I was only doing this for Mourinho." pic.twitter.com/lmpCANcm7D

Rafa took the Chelsea job with a similar level of controversy to when he joined Everton this season.

He previously remarked he “would never take that job [at Chelsea], no matter what. For me, there is only one club in England, and that’s Liverpool.”

Despite this, he arrived at Stamford Bridge in November 2012 as an interim appointment, after the sacking of Roberto Di Matteo, who had won the Champions League with Chelsea in 2012 but left them on the verge of becoming the first holders to exit at the group stage of the competition.

Benitez was unable to prevent that fate or improve on their third-place position in the Premier League, while the Blues were beaten 2-0 on aggregate in the League Cup semi-final in a shock result to Swansea City and lost in the FA Cup semi-final to Manchester City.

However, Benitez would once again lift a European trophy, this time in the Europa League – beating Benfica 2-1 in the final. In doing so, he became only the second manager to win both the Champions League and the Europa League with two different teams, and Chelsea became the first British club to lift all three major European trophies.

After six months in charge, Benitez left his interim post at Stamford Bridge with a record of 28 wins, 10 draws and 10 losses in all competitions.

Benitez joined Napoli in May 2013 on a two-year contract with an expectation to push for the Serie A title, after I Partenopei fell short in the previous season, finishing in second place, 11 points behind title-winners Juventus.

But after six months of Benitez in charge, Napoli did not meet the heights expected of them. In December 2013 they sat in third place, eight points behind league leaders Juventus. After 15 games in charge in the league, Benitez had won 10, drawn two and lost three, in what could be described as a ‘typical’ start to the season for them at that time.

There was some success for the Spaniard, with Rafa winning the Copa Italia with Napoli in 2014, but they ultimately ended the season in third place with a huge gap of 22 points away from title winners Juventus.

Benitez resigned the following season, after falling further down the table and missing out on a Champions League spot by one point, finishing fifth.

With players such as Cristiano Ronaldo, Sergio Ramos, Gareth Bale and Karim Benzema, to name a few, the expectations both domestically and in European competitions were high.

The first six months for Benitez were quite positive with Madrid embarking on a 10-game unbeaten run at the start of the La Liga season. However, by December they had lost three matches, including a 4-0 defeat in the El Clasico, and sat five points adrift from joint-leaders Atletico Madrid and Barcelona.

After 15 games, they had won 10, drawn four and lost three. In the Copa del Rey, Real played Cádiz in the Round of 32, winning away 3–1 in the first leg. But unbelievably, Benitez fielded an ineligible player in Denis Cheryshev as he was suspended for that match. As a result, Madrid were disqualified.

In the Champions League, however, Madrid were successful under Benitez, and topped their group with 16 points.

In January 2016, despite sitting in third place and just five points behind league leaders Atletico, Rafa was sacked following allegations of unpopularity with supporters and a failure to get results against ‘top sides.’

📸 Modric vs Scotland at #EURO2020 👇 pic.twitter.com/oQ6OxRGIII

Benitez joined the Magpies in March 2016 when they were on the brink of relegation, sitting in 19th and a point away from safety. He had just 10 games to close the gap.

After losing his first game to Leicester City, who would go on to be league champions, Benitez gained 16 points from nine games, including a 1-1 draw with Manchester City, a 2-2 draw against Liverpool and a resounding 5-1 victory over Spurs in the final game of the season, but it was not enough as Newcastle ended the season in 18th, just two points away from safety but ultimately relegated.

Benitez remained in his post at St James’ Park, instantly regained the club’s Premier League status by winning the Championship title in 2016-17, then clinched an impressive 10th-place spot the following year. He remains very well-regarded by Newcastle supporters. 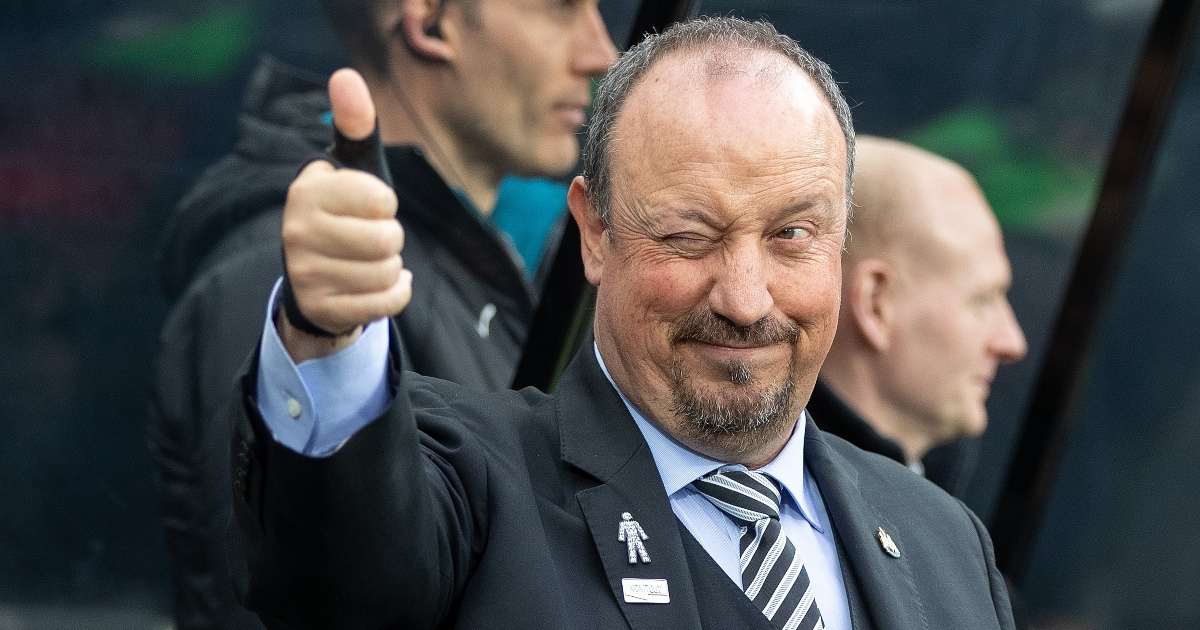 READ: Ranking every Newcastle manager of the Ashley era by their PL record

After his first six months at the club, Dalian Pro finished the 2019 season with a mid-table ninth-place finish. In his first 14 league games, Dalian won five, drew three and lost six, aided by new signing Salomon Rondon, who would ultimately follow Rafa to Everton.

The following 2020 season was postponed due to COVID-19, and Benitez resigned from his role as manager citing concerns over the health and wellbeing of his family due to the pandemic.