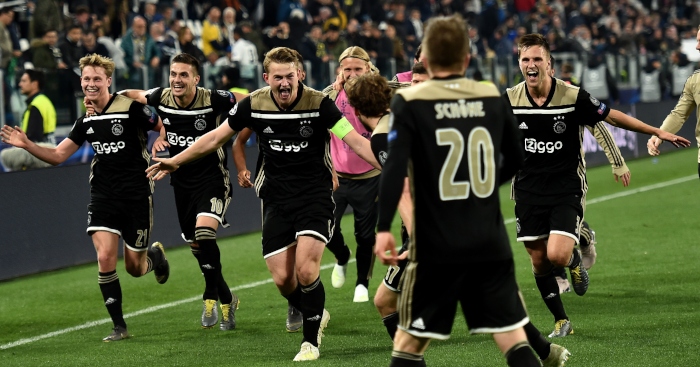 Ajax continued their remarkable run in the Champions League by beating Juventus on Tuesday night to reach the semi-finals – and the performances of their exciting young side have caught the attention of plenty of Europe’s superclubs.

Two years after reaching the Europa League final, Ajax are hoping to repeat the feat in the Champions League, but it feels inevitable the side will follow in the footsteps of Monaco and Borussia Dortmund in recent years by being broken up.

We’ve taken a look at six of their brightest prospects who they may struggle to hold on to this summer.

He’s 19 FFS yet has already captained Ajax to a Champions League semi-final.

“The best young centre-half on the planet,” was Rio Ferdinand’s verdict on BT Sport after De Ligt scored Ajax’s winner against Juventus in the quarter-final. “Beautiful and majestic ball-playing ability.”

Manchester United already passed on the opportunity to sign De Ligt, with former head of youth recruitment Derek Langley telling the Manchester Evening News earlier this year he had recommended the Netherlands international and Frenkie de Jong to the club.

Unsurprisingly, De Ligt is now one of the most sought-after young players in the world. As well as United, Liverpool, Manchester City and Barcelona have all been credited with an interest.

“It (a move to Liverpool) could happen,” De Ligt told Dutch reporters in March. “They are a great side, and Van Dijk is there, and I learn a lot from playing with him for the national team.”

Barcelona president Josep Maria Bartomeu, meanwhile, told Marca: “His name is on the table. Where there is such talent away from Barcelona, we’re always looking at them.”

A 17-year-old Matthijs de Ligt, this lad is going to be some leader.pic.twitter.com/JcRQfBJ468

The scorer of Ajax’s equaliser against Juventus with an opportunistic turn and finish, Van de Beek may not be as well known as De Ligt or De Jong, but the midfielder has been on the radar of a host of big clubs for a number of years.

In 2017, reports in Germany suggested Bayern Munich and Barcelona were keeping tabs on the player after he broke into the Netherlands’ senior set-up.

One of the more recent Ajax youngsters to start making headlines, Neres earned his first cap for Brazil in March amid a campaign in which he has scored 11 times and assisted a further 10 goals in all competitions to date.

The Telegraph say Arsenal, Everton, Chelsea and Manchester United are all interested in the 22-year-old, who could cost around €40million this summer, while Le 10 Sport have linked him with a move to Liverpool.

Borrusia Dortmund did make an official approach for the winger in January, only for their €33million bid to be rejected. 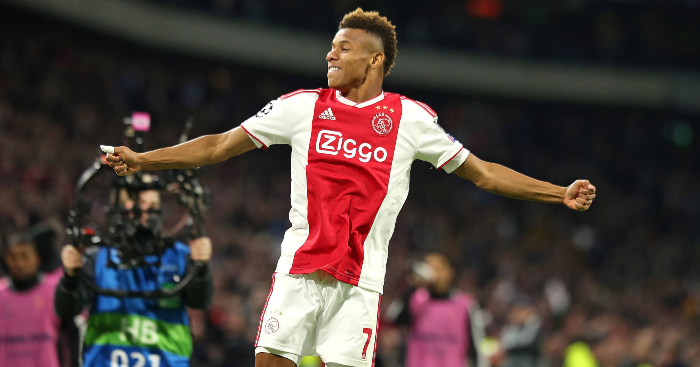 Signed by Ajax at the age of eight, Mazraoui has gone under the radar at right-back in comparison to some of his more hyped team-mates.

The 21-year-old only broke into Ajax’s first team last season and has only established himself in the starting XI this term.

Given the lack of attention on Mazraoui, the Morocco international has been the subject of less transfer speculation than the likes of De Ligt and Van de Beek, although Barcelona were linked in October and Marca reported interest from Valencia in March.

However, the defender signed a new contract at Ajax last month, committing his future to the club until 2022.

Signed from Danish outfit Silkeborg for €270,000 in 2015, Dolberg has spent the last three seasons in Ajax’s first team, scoring 33 goals in 74 Eredivisie appearances, competing for the spot to lead the line for the club with Klaas-Jan Huntelaar over the last two years.

Dolberg’s father, Flemming Rasmussen, has hardly tried to stem the hype surrounding his son, saying: “I see many similarities between my son and Van Basten as they are the same size and they have the same speed and a good shot.”

In February, Marca reported that Real Madrid are interested in the striker while also named dropping Barcelona, Liverpool, Arsenal and AC Milan.

But in October, Dolberg’s agent ruled out a potential move to Napoli.

“My client has always been liked by Napoli, but it’s not a feasible deal for them to pull off,” Jens Steffensen told Radio Marte. “He’s worth more than €30million, which is a figure out of Napoli’s reach.”

Possibly the most high profile of all Ajax’s youngsters, De Jong has already agreed to join Barcelona in the summer, having signed a five-year deal with the Catalan giants set to pay €75million for the 21-year-old, which could eventually rise to €86million.

De Jong came through Willem II’s youth academy, making one Eredivisie appearance for the club, before joining Ajax four years ago in a remarkable deal which cost the club just €1.

However, Willem II negotiated a 10% sell-on clause as part of the deal, meaning the windfall they are set to receive from De Jong’s move to Barca will equate to roughly 63% of their annual budget.