Six of the best and most boring James Milner stats: Penalties, Sunderland… 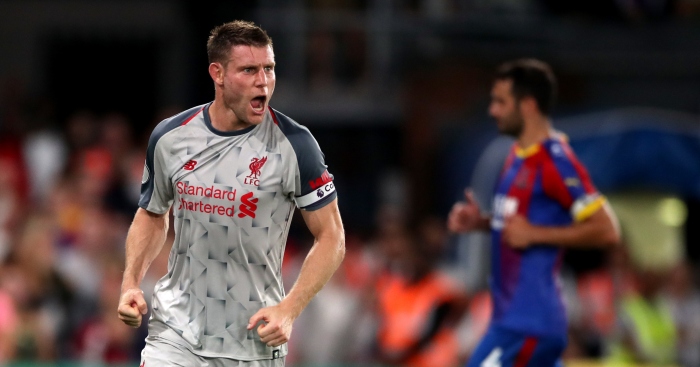 James Milner has enjoyed a lengthy Premier League career with the likes of Leeds United, Manchester City and Liverpool, setting several records along the way.

Milner has earned a reputation for being reliable, versatile – and boring, even though the latter is most definitely not true.

He does, however, have a few spectacularly boring records to his name – as well as some actually pretty great ones. We’ve taken a look at the pick of the bunch…

Milner hit a penalty against Crystal Palace to open the scoring in Liverpool’s second game of the season to create a particularly niche record.

Mohamed Salah was fouled by former Liverpool defender Mamadou Sakho, but rather than last year’s Golden Boot winner step up for the chance to score his second of the season, he handed the ball to the most trustworthy man there is.

Milner sent Wayne Hennessey the wrong way, and in the process became the first player to score eight consecutive Premier League goals all from penalties.

With his goal for Liverpool in a 2-0 win over Sunderland in 2016 – obviously a penalty – Milner joined an elite club.

He became only the second player, after Emile Heskey, to score against Sunderland with five different clubs. And it all started with that first back in 2002…

By scoring the first in a 2-0 win over Palace, Milner extended a record which he took from Darius Vassell in 2017.

The Liverpool No.7 has now scored in 48 Premier League games, and ended up on the losing side in none of them. He really is a man you can rely on.

READ: Revealing the top 11 players to score in the most PL games without defeat

In an international career which is probably best described using the phrase “you know what you’re gonna get”, Milner earned an impressive 61 caps.

But, to add to that, he appeared a huge 46 times for the Under-21 side, setting the national record when he had reached 30.

Milner played his last game as an Under-21 in the 2009 European Championship final, losing to Germany after the side reached the final for the first time in 25 years.

The year is 2041. 51 year old James Milner is still bombing up and down the pitch every week in the Premier League. There are calls for him to come back for next year's World Cup.

England manager Neil Warnock says there's every chance he'd bring him to Mars for the tournament.

Six weeks after a 16-year-old Milner first took to the field for Leeds, he netted his first Premier League goal in a 2-1 Boxing Day win over Sunderland in 2002.

Aged 16 years and 356 days, Milner became the youngest player to ever find the back of the net in the Premier League.

That put him a couple of days in front of Wayne Rooney – who had netted his first earlier the same year – before James Vaughan set a new record in 2005, scoring for Everton aged 16 years and 270 days.

Jamie Milner is evergreen. Weird to think that he was once the youngest player to score a premier league goal, because it feels like he’s been the exact same age for all of him 45 year long career.

This surpassed Neymar’s previous record of eight assists in any single Champions League campaign, with Milner picking up his nine from just 13 appearances.

Thinking about it, James Milner on a free transfer has to be one of the biggest bargains in recent football history. Man is an absolute colossus, broke the Champion’s League assist record last season, and somehow seems to keep getting better as he ages. Like a fine wine. #LFC