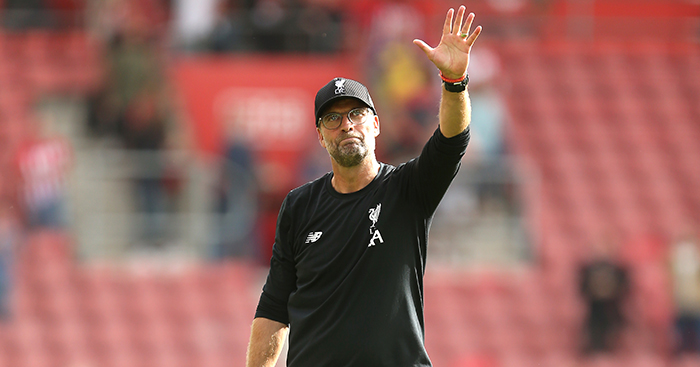 Liverpool survived a scare to win 2-1 at Southampton on Saturday and make it two wins from two games in the new Premier League season.

Klopp’s side were not at the best on the south coast but escaped with three points to end a successful week after their win over Chelsea in the UEFA Super Cup.

Here are six of the best stats following that latest win.

Saturday’s win at Southampton means Jurgen Klopp has now won 300 points in fewer games (146) than any other manager in Liverpool’s history, even when adjusting all records to three points per win.

Klopp has managed it in four games fewer than Kenny Dalglish, who hit the mark in 150 in his first spell, with Rafa Benitez (159), Bob Paisley (161) and Bill Shankley (166) completing the top five.

Of the Reds’ previous five managers, Rafa Benitez’s win percentage of 55.26% was unsurprisingly next best behind Klopp, with Brendan Rodgers (51.64%) and Gerard Houllier (50%) not too far behind but Roy Hodgson way back on 35%.

Having started the new Premier League season with back-to-back wins, Liverpool have now rattled off 11 in a row having finished the previous campaign with nine in succession.

That run of 11 wins equals their best-ever winning streak in the competition, set by Rodgers’ side in 2013-14, but the Reds face a difficult game against Arsenal next weekend in their bid to claim the record outright.

It is also worth pointing out that the previous run of 11 straight wins also came in the same season as opposed to being straddled across two, but it’s nevertheless an impressive stat.

This is only the second time Liverpool have ever started successive Premier League campaigns with back-to-back wins having only previously managed it in 1993-94 and 1994-95.

Having won their previous four games against Southampton, the Merseysiders would certainly have been confident of achieving it for the first time under Klopp going into the game at St Mary’s. The aggregate score across those five games is 13-2 to Liverpool.

Having started on the bench in Liverpool’s 4-1 win over Norwich on the opening weekend, Sadio Mané was handed his first Premier League start of the season against his former club.

And having scored on his first start of the season for the past three seasons, Mané made it four in a row with an outstanding strike in first-half stoppage time, becoming the first player to do so since Mark Viduka between 2002 and 2005.

Mane’s goal was his 20th in all competitions for the Reds so far in 2019, at least eight more than any of his team-mates. The only other Premier League player to score at least 20 this year is Manchester City’s Sergio Aguero.

Mané went on to set up Liverpool’s second goal for Robert Firmino, meaning all three of the Reds’ forwards are now already off the mark in terms of both goals and assists this season.

Liverpool’s regular front three have now all each assisted and scored one goal this season.

Three combos among them too:
Firmino to Salah, Norwich
Firmino to Mané, Chelsea
Mané to Firmino, Southampton

Liverpool have such strength in depth these days that they were able to allow Harry Wilson go out on loan for the season again, and although his goal in Bournemouth’s win at Aston Villa was deflected, it extends his remarkable record of scoring from outside of the area.

He has scored 10 since the start of last season, more than any other player in England’s top 92 clubs.

10 – Since the start of last season, Harry Wilson has scored 10 goals from outside the penalty area in all club competitions, the most of any player in the top four tiers of English football in that time. Speciality.