The 6 most dramatic slip-ups from title-chasers: Liverpool, Man Utd… 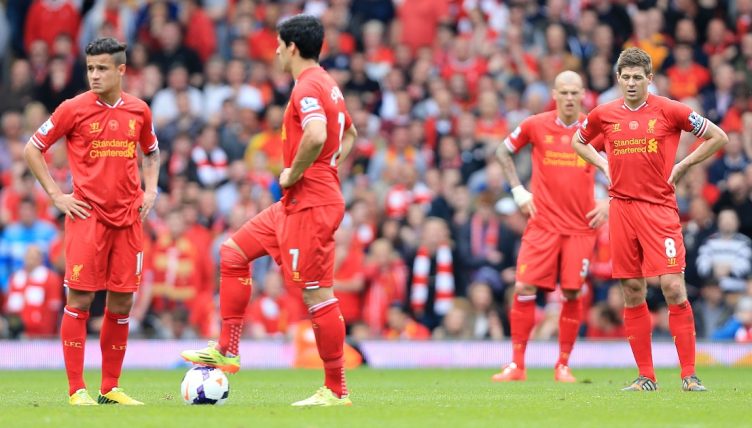 As we approach crunch time in the title race, we often get a growing feeling that even the most infallible challengers will slip up at least once.

A team can be on a long unbeaten run which looks like never ending, only to slip up against the most unlikely opposition, or they can permanently look on the verge of collapse, just needing someone, somewhere to push them over the edge of the cliff.

We’ve picked out some of the most heartbreaking collapses – not necessarily the worst results from title-chasers, but those which will have hurt due to victory being so close and being snatched from them.

When you think back to Newcastle’s 1996 collapse, the two things which stand out the most are Kevin Keegan’s “I’d love it…” speech and “Barnes… Rush… Barnes… still John Barnes… Collymore closing iiiiiinnnnn…”.

However, while the televised defeat at Anfield will have stung, they still had their fate in their hands when they travelled to Ewood Park in early April.

One day before their trip to Blackburn, title rivals Manchester United had earned a late derby win through Ryan Giggs’ strike at Maine Road, meaning a three-goal victory would have taken the Magpies top on goals scored. The reigning champions had lost their last home tie 3-0, too, so it wasn’t out of the question.

Keegan’s side even scored first, taking the lead with 15 minutes remaining through David Batty. The England midfielder had only joined Newcastle from Blackburn that January, so it felt as if the title race was leaning back and taking a huge swig of narrative.

But the mistake was thinking there wasn’t something stronger available. Graham Fenton, a 21-year-old striker, had scored just once all season, but – after coming off the bench with the scores level – popped up with two goals of his own in the final five minutes to turn things around.

Manchester United would give Newcastle a lifeline the following week with a defeat at Southampton, but Keegan’s men were unable to end the campaign with the faultless run they needed.

Having won the Premier League in 2002, Arsenal were well on course to go back-to-back going into their final four games of the season.

Arsène Wenger’s side had held challengers Manchester United to a 2-2 draw in mid-April, keeping them just about in control of their destiny, but with United flying it was essential for Arsenal to win every game, starting with a Bolton side fighting for their lives and a Leeds United outfit not safe themselves.

Things started comfortably enough, though, with Sylvain Wiltord and Robert Pirès firing home just after the break to give the Gunners a two-goal lead. With Bolton having taken just one point from their previous six meetings with the London club, that should have been it.

However, the home side hadn’t read the script. Youri Djorkaeff halved the deficit, and with six minutes remaining Martin Keown put through his own net to equalise.

One week on, Leeds stunned Wenger’s men at Highbury with a 3-2 victory, and suddenly the game in hand was moot. Arsenal scored 10 goals in their last two games, with three separate players netting hat-tricks, but the damage had been done.

Arsenal aren’t the only team to have come unstuck against Sam Allardyce’s Bolton, and Chelsea’s struggles in 2007 showed just how quickly things can change in the Premier League.

The Blues had failed to capitalise on Manchester United dropping points against Middlesbrough, leaving Newcastle a day later having been held to a goalless draw which stopped them from registering a 10th successive win.

In the final week of April, though, José Mourinho’s team played at the same time as their rivals, with their home game against Bolton and United’s trip to Everton both kicking off at lunchtime on Saturday April 28.

At the start of the second period, things were looking rosy for the London club. Salomon Kalou’s flick and a Jussi Jaaskelainen own goal had helped them turn things around after a shock opener from Lubomir Michalik, while Manuel Fernandes’ thunderbolt at Goodison Park had sent United 2-0 down just after the restart.

Suddenly, it looked as though the title rivals would be separated by goal difference alone, with the sides still due to meet at Stamford Bridge in what would surely be a title decider.

However, Chelsea would lose the initiative just as quickly as they had gained it. Kevin Davies equalised for Bolton while, a few hundred miles up the road at Goodison Park, United hit back with four unanswered goals.

A couple of weeks later, United went to Stamford Bridge secure enough to play the reserves, ensuring the likes of Dong Fangzhou and Kieran Lee were given a guard of honour by the previous year’s champions.

While this match might have taken place in February rather than April, its effect on the title race was no less crucial and no less devastating.

The game might be best remembered for Martin Taylor breaking Eduardo’s leg early in the first half, to focus on that admittedly horrible moment would be to overlook the manner in which Arsenal proceeded to sacrifice months of title momentum over the course of 90 minutes.

Going into the meeting at the Emirates Stadium, Arsenal were on a run of 19 points from a possible 21 which had put them five points clear of their nearest rivals at the top of the table. Yes, Birmingham had been the team to stop that from being 21 from 21, but they were facing 87 minutes with 10 men at St Andrew’s.

James McFadden gave them an early worry, putting the Blues ahead, and they held onto their lead through a lengthy period of first-half stoppage time. However, two quickfire goals from Theo Walcott after the break were enough to restore order.

Arsenal had chances to extend their lead, but it was still 2-1 going into the final minute, and that’s always a risk. The events had taken their physical and emotional toil and so, when Stuart Parnaby went to ground under what looked like it might have been a fair challenge from Gael Clichy, the visitors were too worn down to even fight Mike Dean’s call.

McFadden scored the resulting penalty, captain William Gallas failed to hide his emotions, and Arsenal took just three points from the following four games to forfeit their lead at the top.

In fact, their ultimate collapse was so dramatic that they were even overtaken by eventual second-place finishers Chelsea, who were eight points adrift when Arsenal travelled to Birmingham.

📆 #OnThisDay in 2008, William Gallas sulked on the pitch at Birmingham following the injury of Eduardo.

He was dropped for the following match and eventually stripped of the captaincy which was given to Cesc Fàbregas. pic.twitter.com/1JYoENVUFV

With six games remaining in a Premier League season, an eight-point gap ought to be unassailable.

There’s a case for saying a struggling team might allow such an advantage to slip, as they’re more prone to lose successive games and give their rivals an attainable target (see Fulham making up eight points on Reading in 2008 or Sunderland making up seven on Norwich in 2014), but it doesn’t happen at the top.

Or, at least, it didn’t. Going into the closing stages of the 2011-12 season, Manchester United were cruising. Eight points clear, with only one of their remaining games against a team in the top six.

Admittedly that game was against closest rivals Manchester City, but they could afford to lose that, and lose another, and have City win all six of their games, and still be fine.

Losing the first of the six at Wigan wasn’t part of the plan, especially as the Latics had won just twice at home all season before Shaun Maloney scored the only goal of the game against United, but Alex Ferguson’s team rebounded with a 4-0 win against Aston Villa before scoring another four against Everton in the opening 69 minutes, with the visitors only mustering half that amount going into the closing stages.

Football matches last 90 minutes, though, and United were perhaps already mentally preparing for the upcoming Manchester Derby when Nikica Jelavić and Steven Pienaar took advantage of some lax marking to bring the Toffees level.

Suddenly the ball was in City’s court and they took full advantage, winning the derby by a goal to nil and even having time to toy with United’s emotions on the final day before Sergio Agüero sealed the deal in the most dramatic way possible.

Yes, the Steven Gerrard slip was literally and figuratively the defining moment in Liverpool’s failed title bid in 2014, but the following game brought the more defined collapse.

After the pain of the defeat against Chelsea, a 3-0 lead after an hour saw Reds fans do a bit of quick mental maths to see if they might realistically be able to claw back Manchester City’s goal difference advantage, which stood at nine before the trip to Selhurst Park.

Three or four more goals here against a Palace side with nothing to play for, followed by a further six or seven against the similarly mid-table Newcastle side on a run of six defeats from seven, and maybe the dream wasn’t entirely dead. If they could put five past both Arsenal and Spurs, then surely it was possible.

They can’t have expected what followed, even when it was still 0-3 going into the final 12 minutes. Indeed, the scoreline should have made the late drama even less likely if anything.

The result left Liverpool praying for a Manchester City defeat in one of their remaining games, at home to Aston Villa and West Ham, but Manuel Pellegrini’s side were not going to let this one slip.

Can you name the players subbed off 15 times or more in the PL this season?