Six of the most hyped teenage strikers since 2000: Haaland, Rooney, Aguero 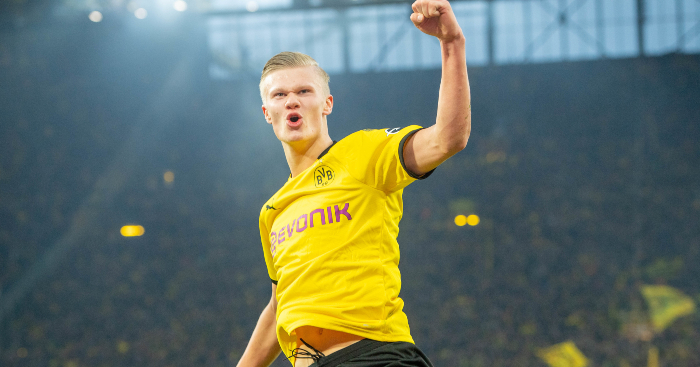 There are few things more exhilarating in football than seeing a young goalscorer take the senior game by storm.

Let’s face it, as children we all dream of making that kind of impact, but only a very select few possess the talent and mental resilience to actually do so.

We’ve taken a look back at six of the most eagerly-hyped teenage strikers of the 21st century, although not all managed to fulfil their potential.

It’s only right to kick-off the list of the 21st century’s most prodigious young strikers with the recently crowned winner of FIFA’s Golden Boy award.

Nobody could anticipate the impact Haaland has made since being picked up by Borussia Dortmund in January 2020, despite the Norwegian having racked up 28 goals in 22 appearances in the Austrian league for Red Bull Salzburg.

Ever since netting a hat-trick on his debut, Haaland has averaged a goal a game in the Bundesliga. He has also become the fastest ever to reach 15 goals in the Champions League – we can still hear the sound of his scorcher hitting the back of the net against PSG to this day.

Blessed with a herculean physique, ridiculous pace and a poacher’s instinct, Haaland is a breath of fresh air – a true call-back to old school number nines in an era dominated by goal-scoring wingers and playmaking forwards.

Oh what a sight it was – early-2000s Rooney leathering the ball into the net in his Total 90s.

Aggressive, explosive and ruthless in front of goal, Rooney was one of the most feared strikers in England as a mere teenager.

He broke the record for the Premier League’s youngest ever goalscorer against Arsenal at age 16. Aged 17, Rooney became both England’s youngest ever player and goalscorer in the lead up to Euro 2004. Goals against Switzerland and Croatia at the Euros subsequently earned him a place in the team of the tournament.

Rooney broke another record when he became the world’s most expensive under-20 player by signing for Manchester United in a £25million deal before taking his game to a whole new stratosphere.

Aguero has been around for so long it’s easy to forget his beginnings as one of the most hotly-anticipated forwards on the planet following his exploits with both Independiente and Atletico Madrid.

Having formed a partnership with Fernando Torres during his first season at Atleti, Aguero emphasised his talents in 2007-08, aged 19, when he won the Golden Boy award.

The Argentine finished third-highest goalscorer in La Liga with 19 goals – and 27 across all competitions – guiding Atletico to Champions League qualification for the first time in a decade.

Lightning fast, skilful and a penchant for the big occasion, Mbappe had it all from the moment he burst onto the scene with Monaco, for whom he made his senior debut as a 16-year-old.

Playing as Radamel Falcao’s strike partner, Mbappe stunned the footballing world in the 2016-17 season, when he helped to fire Monaco to a shock Ligue 1 title, contributing 15 goals in the process.

Mbappe was the star among a talented group of youngsters who also led Monaco to the Champions League semi-finals, scoring vital goals against Manchester City and Dortmund along the way.

A year later, he ran riot at the World Cup, tearing Argentina apart before becoming the second teenager, after Pele, to score in a World Cup final.

One World Cup trophy, four league titles and over 100 goals on, it’s hard to believe the Parisian prodigy has only just turned 22.

A teenage Benzema announced his arrival in the Lyon first team in 2004 by telling established names like Sylvain Wiltord and Florent Malouda at his initiation: “Do not laugh, I’m here to take your place.”

Being the man of action he is, big Benz went on to shatter the record for the youngest French scorer in Champions League history, aged only 17.

Fast forward a couple of seasons and he was reaching double-digit goals in Ligue 1. The 2007-08 season proved especially fruitful, with 31 goals in all competitions.

Benzema’s majestic technique and trickery meant he was already Lyon’s talisman and had won four league titles before Real Madrid came knocking in 2009.

Having been in the shadows of Cristiano Ronaldo for so long, Benzema is finally getting the credit he deserves at the Bernabeu.

Robinho, Ganso, Anderson, Keirrison. The list of Brazilians who failed to meet their potential is a long and sad one. Alexandre Pato’s scintillating rise and equally sharp decline makes the striker’s whole career as big a ‘what if?’ as any of them.

Arriving at a star-studded AC Milan from Internacional in the 2007-08 season, the pacey Pato got off to an equally rapid start.

He announced himself with a debut goal against Napoli as a 19-year-old and finished the season with nine goals in 18 Serie A appearances.

Amongst a veteran Milan side that included Kaka, Pato’s importance only grew the following season as his 18 goals made him the club’s top scorer and Serie A Young Footballer of the Year.

Recurring hamstring problems in 2010 and later injuries proved devastating, however, preventing the youngster from gaining any momentum or ever reaching his previous heights again.

Still, his impressive ratio for club and country at a young age has ensured he remains a cult hero for those who got to witness his complete striking talent. We remember, Alexandre.