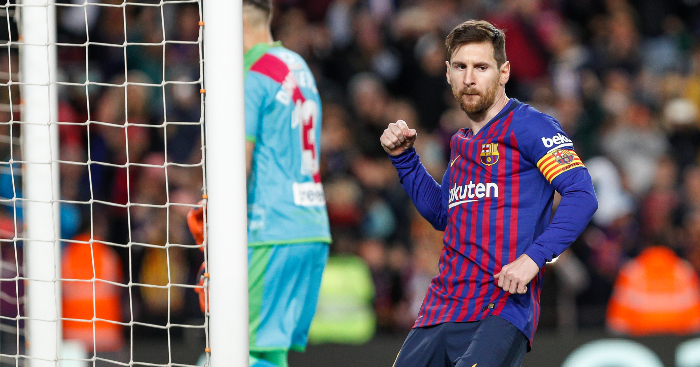 It’s long been established that Lionel Messi is pretty damn good at football – but what do the stats say this season?

Turning 32 in the summer, logic would suggest that Messi is due to start slowing down, but that’s not happening yet as some of these remarkable figures show.

The Argentine added another goal and assist in Saturday’s 3-1 win over Rayo Vallecano. Here’s how his totals are looking for the season so far:

On course for a sixth European Golden Shoe

Not only does Messi top the charts for goals in La Liga, but he also does so in Europe’s top five leagues.

Leading Europe in assists, too

As well as scoring more goals than anyone else in Europe, he’s also provided more assists. He tops the La Liga chart for assists with 12 in total – which is also more than anyone else has provided in the Premier League, Serie A, Ligue 1 and the Bundesliga.

Chelsea’s Eden Hazard is the closest challenger in that regard, with 11.

With a goal each in the 3-1 win over Rayo Vallecano, Messi (26) and Suarez (17) equalled Real Madrid’s tally of 43 league goals for the La Liga campaign so far.

The two prolific goalscorers have given the entire Real Madrid squad stiff competition recently, and while Los Blancos are expected to pull back ahead when they play Real Valladolid, this could be a close race for the rest of the season – especially with Vinicius Jr injured, and the likes of Gareth Bale and Marco Asensio misfiring.

The two of them have also outscored the other 18 teams in Spain’s top division.

When Messi scored two free-kicks in one game against Espanyol in December 2018, he set a new record in Spain for the most in a calendar year with 10.

Over the past five years, Messi has been ridiculously prolific with free-kicks – he’s scored more alone than Real Madrid, PSG, Bayern Munich and Liverpool.

Messi has scored 38% of Barcelona’s goals this season. That’s the second-highest proportion in La Liga, behind Girona’s Christhian Stuani, who has scored 15 of their 27 league goals (56%).

If you include assists, Messi gets a lot closer. Stuani is yet to register a La Liga assist, whereas Messi has scored or assisted 38 of Barcelona’s 69 league goals.

That’s a direct hand in 55% of Barcelona’s league goals this season – not bad going when you consider only PSG and Manchester City have scored more goals in Europe.

Leading in other key areas

Not only does Messi lead La Liga for goals and assists, but he’s out in front in other key offensive areas.

He averages the most key passes per game (3), which is the final pass before a team-mate’s shot. He’s also way out in front in terms of shots per game, averaging 5.3 – that’s almost 33% more than second most prolific shooter, Rayo Vallecano’s Raul De Thomas.

Somewhat rare for Messi, he’s not the league’s most reliable dribbler, although he’s not far behind and could well end the season on top in this regard. He averages 3.9 dribbles a game – only Sofiane Boufal (4) and Adnan Januzaj (4.1) average more.

The three of them are way out in front, averaging over one more per game than anyone else, while Messi has managed to sustain the average over a longer period – he’s played more the double the minutes Januzaj has, and played over 700 more than Boufal.