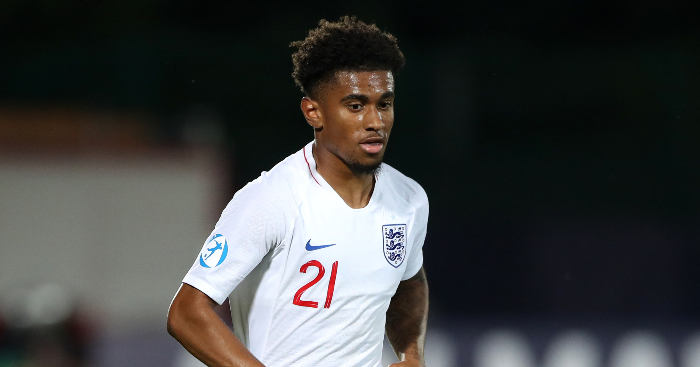 England‘s senior team are well on their way to Euro 2020, having cruised past Bulgaria with a 4-0 victory on Saturday. But it was a big week for the younger stats coming through too.

The likes of Lewis Cook, Dom Solanke, Mason Mount and Jadon Sancho have broken through to get their first England caps after impressing for the youth sides in recent years, and these could be next to follow in their footsteps.

The 20-year-old, on loan at Leeds United from Arsenal, has had a hell of a few months. He scored his first Premier League goal at the end of last season, before going on to impress for them in pre-season, scoring three times for the Gunners.

He’s yet to be given a league start for Marcelo Bielsa’s Whites, but already has three goals to his name from League Cup appearances and substitute cameos, including a late winner in a 1-0 win over Brentford.

Now he’s added a brace for England Under-21’s as they beat Turkey 3-2 in qualification for the next Euros.

Great to see Eddie Nketiah having a great start to the season! 📞🔥

4 goals in 6 games for club & country

Nelson scored the late winner against Turkey, and while it was far from the cleanest strike, they all count.

The Arsenal academy product is back with his parent club after an impressive spell on loan at Hoffenheim last season, and at the age of 19 he’s one of the most experienced players in Aidy Boothroyd’s young England side.

The Norwich City right-back, who played a pivotal role in the Canaries’ promotion last season, made his debut for the Under-21s on Friday, adding to caps at U19 and U20 levels previously.

He completed all 90 minutes against Turkey, getting a booking for timewasting late on as the Young Lions saw out the victory.

The 19-year-old looks a serious talent, but he’ll have his work cut out to break in given the wealth of talent in the senior squad already, with Champions League winner Trent Alexander-Arnold pushing Kieran Trippier and Kyle Walker for the spot already.

Fulham might have lost Ryan Sessegnon to Tottenham, but they’ll be hoping his twin brother Steven can have a similar impact after breaking into the first team this season.

Scott Parker’s side have the aim of getting back into the Premier League, and the 19-year-old’s playing in the full-back role his sibling previously occupied.

After representing England’s Under-20s at the Toulon Tournament in the summer, he’s just made his debut for the Under-21s.

Gordon made his Everton debut as a 16-year-old, coming off the bench to see out a 3-0 win over Apollon Limassol in the Europa League. He’s not appeared for the Toffees first team since, but been ticking over nicely with the Young Lions.

Starting for the Under-19s, the left winger was the liveliest player as England beat Greece 3-1 at St. George’s Park. He didn’t get on the scoresheet himself but played a big role in two of the three goals, hitting the upright before Ryan Edmondson slotted home the rebound.

He was handed a first international cap as England hosted Greece on Friday, and he was on the scoresheet once again.

“Just playing football is a dream for me, but to do it for my country, train with amazing coaches, and to play alongside great players, it’s a privilege and I really count myself lucky,” he told Leeds United’s official website.

“I’ve just got to keep my head down, keep working and hopefully more appearances will come.”