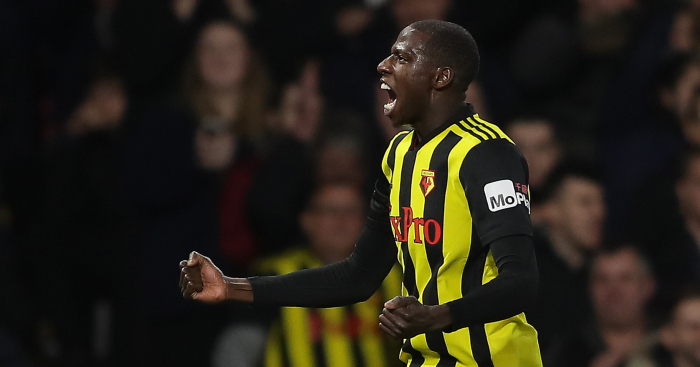 Footballers are usually pretty coy when it comes to discussing their futures – but occasionally they make it quite clear that they want to move on.

Now the January transfer window is open, some players have taken to issuing the fabled ‘come and get me’ plea.

We’ve taken a look at six players who have openly admitted they want to leave their current club.

Doucoure has never been shy to talk up a move away from Watford, and the midfielder has fanned the flames of speculation once again this month.

He told French television station Canal Plus: “I think I am going to leave Watford. The club know my ambitions and want to help me get to the next level.

“I’m flattered by the interest of PSG, but for the moment there’s nothing concrete. I will focus on my performance for my club. I’ve not had contact with PSG and they’ve not contacted Watford.

“My goal is to play well for Watford and then maybe join a Champions League team.

“This winter we’ll study all possibilities on offer. The most important thing for me is to continue to progress and with my performances.

“Staying in England is a possibility and the Italian league is becoming more interesting. There are clubs who have returned to show interest in me again.

“The first criteria for me is that the club plays in the Champions League.”

Arnautovic himself hasn’t confirmed his desire to leave West Ham, but his brother and agent has done so on his behalf.

“It’s been quite tight-lipped, but everyone knows Marko wants to go,” team-mate Michail Antonio told Goals on Sunday. “He’s massive for the club, I think he’s joint top goalscorer right now, so he’s a big player for us.

“The fans love him, it’s just one of those things where in his life right now, he feels it’s another step for him and I think he’s going to one of the best clubs over there, where he might be able to win some trophies.

“He’s coming to the latter end of his career, maybe he just feels like before he retires he needs a new step, and this might be a step that he wants.”

Liverpool fans are unlikely to shed any tears, but Moreno spoke in December of his unhappiness at Anfield and his desire to return to his native Spain.

“I do not feel good, that is the truth,” Moreno told Cadena Ser.

“Moving back to Spain is something I have thought about, I am tired of the cold here, but I do not know about interests from other clubs.

“I am in my fifth year here, there is no agreement on a renewal and in January, I am free to listen to any offer.

“I hurt myself giving everything for this team and I think that when I came back from injury, I deserved an opportunity.

“The situation is normal for a lot of players but simply, I did not like the way he (Jurgen Klopp) has treated me, you can say that.”

Alberto Moreno has told Liverpool that he does not want to renew his contract with the club and wants to return to La Liga. [Estadio Deportivo]

Cahill is a Chelsea stalwart but has found himself an outsider under Mauizio Sarri and spoke at length about his future in September.

When asked whether he could leave the Blues in January, Cahill replied: “I don’t want to jump the gun, but as things stand, probably yes. Sometimes you have to make tough decisions. I did that when I was at Villa all those years ago.

“If I had been patient maybe I would’ve played in that first team, but I wanted to take the decision to go and play regularly. As it is, I’m not enjoying things. That’s just me.”

He added: “Having been a big part of things for six years, I’m finding it difficult to deal with this situation. A lot of things have been running through my head.

We had such a good experience at the World Cup and I’d never take that back. The flip side is I came back a week before the season started against three defenders who’d been back plenty of time before me.

“To learn a new way of defending and new ideas – I’m sure [Sarri] didn’t feel comfortable putting me in and so I fully expected to miss the start of the season, and we’ve not lost, so there’s no arguments from my point of view.

“But at the same time, thinking back to when Petr Cech was at the club – when Thibaut [Courtois] came he found it difficult to get game time, but he knew he could play week in, week out. I’m in a similar situation.”

The defender has still played just 21 minutes of Premier League football this term, and Sarri admitted in December that he will have to leave the club if he wants first-team football.

Another out-of-favour Chelsea defender, you could be excused for forgetting the Blues ever signed Zappacosta, or indeed the actual existence of the full-back.

“I want to try to give the coach food for thought, also because my objective is to remain in the reckoning for Italy. Inter sought me in the summer, but I am happy here,” Zappacosta told Il Corriere dello Sport in the summer.

However, he he went on to add: “If I were not to play much, though, I’d think about [leaving]. Nobody likes being on the bench.”

Eighteen Premier League minutes suggest the Italy international will be considering his options this month – especially given he hasn’t even made the bench for four of Chelsea last seven league fixtures. A move to Lazio has been mooted.

From one Italian full-back to another, Darmian has been linked with a move away from Manchester United for what feels like every transfer window since he stepped foot at Old Trafford, and he made his feelings clear in the summer.

“I want to play more regularly,” he said. “Last season, I didn’t play much – that’s my objective and my ambition. That’s why I spoke with the manager and also with the club about my future.

“I want to leave, but we will see what happens because we don’t know.”

This season he has made all of four appearances, only one of which has come under Ole Gunnar Solskjaer – the 2-0 victory over Reading in the FA Cup.