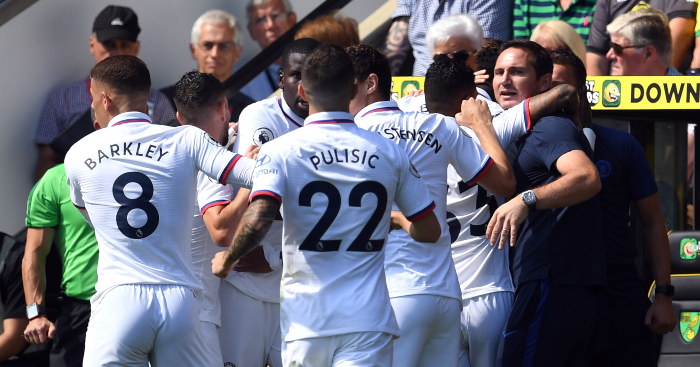 Chelsea recorded their first win under new manager Frank Lampard on Saturday as they secured a 3-2 victory at Norwich City.

A Tammy Abraham brace plus Mason Mount’s strike got the Blues up and running for the season as Lampard tries to reinvigorate the squad while unable to sign any new players due to their transfer ban.

And we’ve rounded up seven intriguing stats to come out of the win which should offer Chelsea fans hope for the future.

– After Ross Barkley replaced Pedro in the starting XI, the average age of the side facing Norwich was 24 years and 208 days, Chelsea’s youngest since February 1994, when Glenn Hoddle sent out a team of 24 years and 190 days.

– Chelsea had two English players aged 21 or under score in the same Premier League match for the first time since August 1992, the very first month of Premier League football, when Eddie Newton and Graham Stuart scored in a 3-3 draw with Sheffield Wednesday.

– Including the play-offs, Tammy Abraham has scored 28 league goals since the start of last season, the most of any English player in the top two tiers of English football in that time.

– Abraham is the first English player to score two or more goals in a Premier League fixture for Chelsea since Frank Lampard vs West Ham in November 2013.

– Having scored 57 league goals to date in English football, Abraham’s second against Norwich was his first from outside the box.

– Aged 21 years and 326 days old, Abraham is the third youngest player to score a brace in the Premier League for Chelsea, after Mark Nicholls in January 1998 against Coventry (20y 225d) and Eddie Newton in December 1992 against Tottenham (20y 358d).

– All four of Chelsea’s league goals this season have been scored by Englishmen aged 21 or under (Mason Mount and Tammy Abraham).