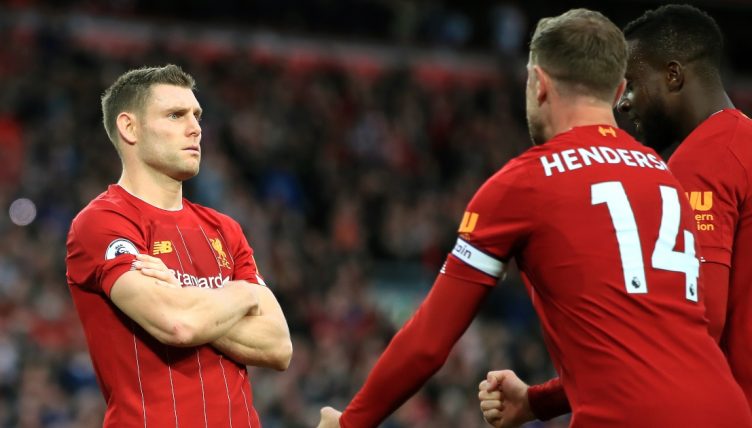 James Milner is a better human being than you – yes, you. Don’t worry, it’s not just you. It’s a fact we all have to live with. James Milner is the best person on this godforsaken planet. And it’s not even close.

The Liverpool midfielder has only begun to be truly appreciated as a player after reaching the latter stages of his career, and his personality is now shining through more than ever as an all-round good guy.

We’ve taken a look back at six times we’ve just really wanted to give him a big hug and tell him how much we love him.

Jurgen Klopp caused plenty of controversy with his decision to field an entire team of academy players with Neil Critchley in charge for Liverpool’s FA Cup replay with Shrewsbury Town in February 2020.

But while the majority of Liverpool’s senior players were away enjoying breaks in sunnier climes such as Miami and the Maldives, Milner remained in Merseyside to help out the club’s young players ahead of the game at Anfield.

After training with the team the day before the game, he was then in the dressing room to offer advice and encouragement to the squad. He even asked for Critchley’s permission before doing so.

James Milner what a inspiration. Helped out the under 23’s instead of having a holiday. A perfect role model for any club. 🔴 pic.twitter.com/gPAGQvqlpU

Lifelong Liverpool supporter Devine was confined to a wheelchair and required 24-hour care due to injuries suffered in the Hillsborough disaster in 1989.

Devine had previously met Milner during visits to Melwood before the former England international ensured Liverpool’s open top bus stopped outside his family home during the victory parade in the city after winning the Champions League final in 2019.

James Milner made the Liverpool celebration bus stop outside the house of Andrew Devine, a survivor of the Hillsborough tragedy, so he could show him the Champions League trophy 🏆

In 2011, Milner established his own foundation with the aim of promoting ‘healthy recreation for the benefit of young people in the United Kingdom by the development, improvement and provision of opportunities in sports’, while also raising money for national charities such as Bloodwise, MNDA, NSPCC and Help for Heroes.

In December 2019, the foundation celebrated its eighth anniversary by surpassing the £1million mark for funds raised.

At the age of 36, Milner is the oldest outfield player in Liverpool’s squad, yet he has become famed for setting the standards when it comes to fitness training in pre-season.

The former England international is renowned for seeing off all challengers as the last man standing in the gruelling lactate test, putting his younger team-mates to shame.

As Leeds icon Eddie Gray, who helped mentor Milner at Elland Road, told the Telegraph in May 2019: “I used to say to all the boys, make the most of this chance. Never leave a club with regret. Never feel you never became the player you could or should be. Nobody has worked harder to earn everything he deserves than James Milner.”

Growing up as a Leeds United fan, Milner was never going to be too fond of Manchester United, and his career path has seen him play for the Red Devils biggest rivals: Leeds, Manchester City and Liverpool.

“That was the idea really!” he told The Times in May 2018. “Growing up a Leeds fan, I was never allowed to wear a red t-shirt, my old man never allowed it. Seriously. ‘We can’t wear red. We’re Leeds.’

He may have played top-flight football for nearly 20 years, but he’s still a fan at heart.

In the uber-serious and ego-driven world of professional football, Milner has shown himself to be more than happy to take the piss out of himself in his own self-deprecating way.

After being lumped with the tag of Boring James Milner, he has regularly played up to the joke, whether that be celebrating huge Champions League victories by drinking Ribena, trying to find a pack of Mini Eggs with an equal amount of different colours or giving us a sneak peek into Christmas at the Milners.

Milner lifted the Carabao Cup for the second time in his career when Liverpool beat Chelsea in a penalty shootout at Wembley in 2022.

While most of the Liverpool players immediately began their celebrations in their dressing room, Milner and Jordan Henderson showed their class before joining their team-mates.

The duo took the time to shake the hands of the Chelsea players as they made their way back onto the pitch after collecting their runners-up medals.