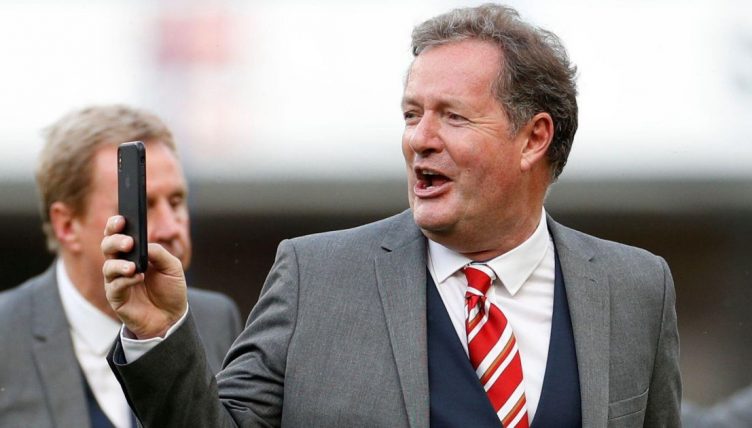 We could have quite easily called this article ‘Shooting Fish In A Barrel’. Not a week goes by when Piers Morgan doesn’t get it wrong on a range of subjects.

Whether it’s rowing with Ariana Grande, or refusing to stick by the results of a referendum, he either just loves the self-own or sticks to the famous Oscar Wilde maxim – that there is only one thing in life worse than being talked about, and that is not being talked about – for all it’s worth.

Here are eight times that Piers got it very, very wrong on #FootballTwitter.

After the team sheets came out for the early-season Manchester United versus Liverpool game in August 2022, Piers was enraged.

He was absolutely certain that Erik ten Hag – the man who United are paying £9million a year to coach their football team and who won five major trophies as Ajax manager – knows considerably less about football than he does.

Specifically, he complained that the decision to include Anthony Elanga in the team in place of Cristiano Ronaldo was “one of the dumbest decisions in football history.” Look, he’s even kept the tweet online.

Benching @Cristiano for Elanga against Liverpool, even by current abysmal Manchester United standards, is one of the dumbest decisions in football history. Ten Hag should be fired for this alone if they get hammered tonight.. or should I say WHEN they get hammered. pic.twitter.com/7MbA53824C

Manchester United subsequently put in one of their most energetic attacking performances of recent years and beat their old enemy 2-1, filling their fans with hope after a few dark weeks. LOL.

England had battled through their first two games at Euro 2020. They’d not played all that well but a 1-0 win over Croatia and a 0-0 draw with Scotland meant they were almost certain to qualify for the last 16.

Morgan felt his intervention was needed before the third game with the Czech Republic. “It’s vitally important England lose badly tonight,” he wrote. “We’ll get a much easier L16 opponent if we do.”

It’s vitally important that England lose badly tonight.
We’ll get a much easier L16 opponent if we do. #euros

The Three Lions earned then  won 2-0 in brilliant fashion before defeating Ukraine and Denmark to make it to their first major final since 1966.

The GOAT is always changing

It seems that Piers is one of those people who decides who is the best depending on who’s in front of him at the time. For example, in 2016, the Daily Mail ran a ‘Top 50 Barcelona Players Of All Time’, and, of course, Lionel Messi was top of their list.

Opinions are like appendixes though; everyone’s got them and most of them serve no purpose. Piers, ever the contrarian, went in a different direction. Cruyff? No. Maradona? No. Ronaldinho though?

However, in 2012, Piers had conferred the greatest ever accolade to Messi. But don’t bother going looking for this tweet. He has deleted it.

Why would Mr Morgan delete this tweet? Well, once he’d gone and interviewed Cristiano Ronaldo for ITV, his opinion mysteriously changed.

BREAKING: @Cristiano scored 4 goals for Portugal tonight. People can argue about whether he or Messi is the greater player at club level (I’d take CR7 every time) but when it comes to international football, Ronaldo is indisputably the G.O.A.T. 👏👏👏👏 pic.twitter.com/X7C8VtjeFq

Piers used to endlessly wang on about his relationship with Donald Trump, bragging about how “he calls me Champ!”. This is possibly because the POTUS can’t remember Morgan’s name, but hey ho.

So when Trump decided to throw some shade on Megan Rapinoe in 2019, Morgan took the role of the bully’s pal, running around and taunting, knowing that he’ll be mostly ignored.

Ms Rapinoe sure does love herself. Can’t wait to see our Lionesses dent that stupendous ego. pic.twitter.com/w5FzcnXvGQ

This tweet was a double fail though. First, we all saw what Megan Rapinoe and the US Women’s football team did to the Lionesses during the Women’s World Cup. Then, just two days later, celebrating like this was just fine.

It’s really very odd that Piers Morgan should get into it with football players about their abilities. His Twitter spats with Gary Lineker for a start (we’ll get to those), but he’s got into some bizarre rumbles with other players.

Earlier in 2019, Morgan was berating Arsenal as usual, following a 1-1 draw with Brighton at the Emirates.

For whatever reason, Jon Walters decided to get involved. (Morgan isn’t alone in making daft football statements, by the way. Even the most fervent Spurs fan would disagree with this.)

Then Morgan just walked into the next exchange.

Mate, you played for 12 clubs, none of which even scales the dizzy stature heights of 'medium', so I'd really avoid playing the club size card if I were you. https://t.co/uCApz7DnPw

It’s either a lapse in concentration, or shitting yourself in public for attention.

Getting a tattoo is one’s own business; unless it’s getting an actual cock and balls tattooed on your face, then it’s all of our business.

When Raheem Sterling got a gun tattooed on his leg, it became front page news. No one had asked Sterling what the tattoo was about, but via Instagram, he shared the tale.

Tragically, Sterling’s father had been shot and killed while the player was a young child, and the gun was part of an unfinished piece of body art.

This explanation wasn’t good enough for Morgan though.

So you think it’s perfectly OK for an England football star to tattoo a large assault rifle onto his leg just before a World Cup, where it will be seen by billions of people? I find THAT pretty weird & sad, regardless of his explanation. https://t.co/iDH7vIyHaw

Then after a bit of whataboutery and a change of focus (surely lessons learned from Trump), a Twitter user showed us how the gun tattoo could be made worse…

Could have been worse! Could have had an even bigger weapon on his leg 👍 pic.twitter.com/pXmYNaNpbg

Oh no, not Kolo

At least Walters and Sterling’s social accounts are operated by the players themselves. Or the player’s management team. Whatevs.

This one started in a really weird way.

Olly Murs tweeted something about London.

Kolo Toure decided to give it some.

The tweet, from @KoloKoloToure28 (an account which no longer exists for reasons which will become clear) simply replied to Morgan with: “Shut the fuck up.”

I'd be this angry too if my younger brother was better at football than me. https://t.co/0iZbTnXnHW

Mate, it's this kind of dismal defending that forced you into retirement. Ssshhh. https://t.co/e0dWDrgcR7

After this friendly back and forth, it dawned on Piers that he might just have been catfished.

UPDATE: I’ve just been reliably informed @KoloKolotoure28 is a fake. So I’ve been squabbling with an imposter. The real Kolo apparently isn’t even on Twitter… 🙄

Hi mate @YayaToure, this is a bit awkward but if Kolo happens to like me, I unreservedly apologise for ripping into him all morning…

We’ve not asked Kolo Toure, but we reckon the chances of him liking Morgan are pretty slim.

Lineker vs Morgan seems to be a mutually beneficial piece of PR that they think works for both of them. Not sure why Morgan would think it works for him, because he comes out on the losing end just about every time.

Even the most basic bits of football information, Piers can’t retain. This is a classic of the genre.

I'm in full control, Jugs. Beckenbauer was a centre half, no? https://t.co/UawylCFwRd

Football has myriad positional terms, that have evolved over decades. For instance @GaryLineker wasn't a 'striker' – he was a 'goal-hanger'.

And the “I’ve shagged your lass” bantzzzzz always falls flat.

@GaryLineker everything I do lasts long. Ask @DanielleBux.

“@piersmorgan: @GaryLineker everything I do lasts long. Ask @DanielleBux.” < Like your CNN show?

He even causes Lineker to come off the fence despite his BBC role.

“@piersmorgan: God, if Arsenal lose later. I will take myself to the electric chair AND turn it on.” < I should be impartial, but now….