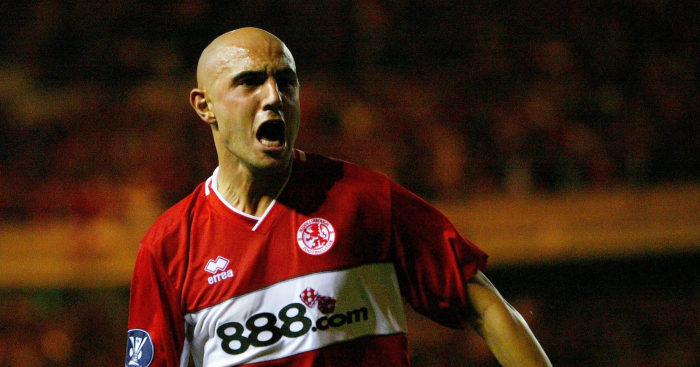 Perhaps its misplaced nostalgia, but the UEFA Cup will always hold a special place in our heart.

Maybe the Europa League suffers from having just a bit of a naff name, but the UEFA Cup just felt and sounded more exciting.

We’ve taken a look at six cult heroes from the latter years of the competition, before it was rebranded and lost its glamour.

“Massimo, I love him until I die.” Jimmy-Floyd Hasselbaink summed up the feelings of every Middlesbrough fan in the immediate aftermath of Boro’s incredible comeback against Steaua Bucharest in the 2006 semi-final.

Looking back, the Boro squad was packed full of talent, featuring three superb goalscorers in Hasselbaink, Mark Viduka and Yakubu, an exciting left winger in Stewart Downing, cultured midfielders Fabio Rochemback and Gaizka Mendieta, and even our Gareth at the back.

So few fans expected Maccarone to write his name in folklore as the hero of their run to the final. The striker was fifth choice in Steve McClaren’s pecking order at the start of the season, but made two famous contributions as a substitute.

We also need to give a shoutout to Ali Brownlee’s commentary after the heroics against Bucharest.

Massimo Maccarone scored an 89th-minute winner as @Boro came back from 3-0 down to reach the UEFA Cup Final.#UTB pic.twitter.com/5eoth89MIt

We can be guilty of wishing Larsson came to England sooner than he eventually did and wondering just how good he could have been in the Premier League, when in actual fact we should be celebrate just how outrageously good he was during his pomp for Celtic.

The man who Ronaldinho called “idol” at Barcelona was unstoppable for the Glasgow giants in their run to the final in 2002-03, scoring 11 goals in the competition that season, including two in the heartbreaking 3-2 defeat to Porto in the final.

Of all Celtic’s opponents that year, only Stuttgart, in the fourth round, managed to stop Larsson scoring, with the Swede bagging against FK Suduva, Blackburn Rovers, Celta Vigo, Liverpool and Boavista – against whom he scored a late winner in the semi-final.

Henrik Larsson on Martin O'Neill's team talk before the 2003 game against Liverpool. pic.twitter.com/DMxwZi7M5q

We’ll leave this one for Tom Victor to explain.

READ: Diego: The South American star robbed of the European final he deserved

Ameobi was never the most prolific goalscorer for Newcastle United but something about European football brought out some of his best performances for the club.

The striker bagged an equaliser in the Camp Nou and a brace in a victory against Bayer Leverkusen in the Champions League, while his six goals for the Magpies in the UEFA Cup/Europa League leaves the Nigeria behind only Alan Shearer in Newcastle’s top goalscorers in Europe.

“It’s been a great journey,” he told Sky Sports in 2012 with Newcastle on the cusp of qualifying for Europe once more. “When I first came into the team, I thought we would be in Europe every season because that’s what I was used to, playing in the Champions League and the Uefa Cup at the time.

“But things never last. For me, the fact that I started on such a high and then obviously hit rock-bottom when we were relegated three or four years ago, to see the turn-around so quickly has been a marvellous thing.” 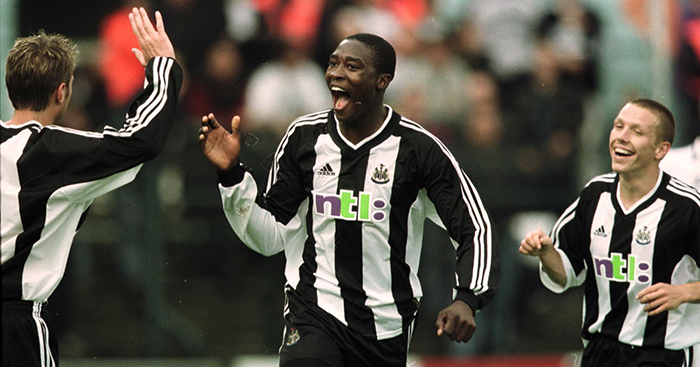 Drogba spent just one season with Marseille, but it was his performances in that campaign which alerted English clubs to the striker’s destructive qualities.

Despite Drogba’s 19 goals, Marseille finished a lowly seventh in Ligue 1, behind the likes of Auxerre and Sochaux, but they managed to reach the UEFA Cup as the Ivorian bagged 11 goals in 16 appearances in Europe that season.

He scored five of the French outfit’s nine goals in the Champions League group stage before scoring six more times in the knockout stages of the UEFA Cup, including strikes against Liverpool, Newcastle, Inter.

In the space of 12 months, Drogba quadrupled his value from £6million to the £24million Chelsea spent to bring the forward to Stamford Bridge.

“I’m coming home,” Drogba said ahead of his return to the Velodrome with the Blues in 2010. “This is a meeting I’ve been waiting forever since I left Olympique Marseille.

“I was disgusted at having to sign for Chelsea. That may seem strange, but that’s how I felt. No offence, but Chelsea didn’t mean a whole lot in France.

“It didn’t mean much to me. I knew they were great footballers, but it wasn’t my team. It wasn’t my OM. I just didn’t have any desire to be part of their team.”

“I do not recall any other player who has this sort of relationship with a club he played at for only one year,” Carlo Ancelotti responded. “But it is clear Didier will always have a big place in his heart for Marseille.”

13 legends who moved to England too late: Shevchenko, Gullit, Larsson…