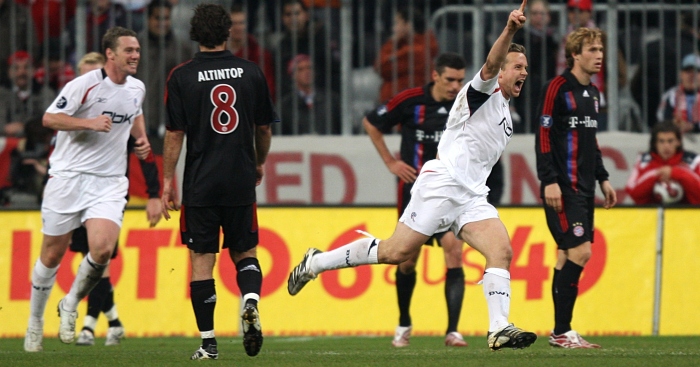 The 2010s have brought a resurgence for English teams in the Europa League, with two wins in 2013 and 2017 after a wait of more than a decade.

However, the competition isn’t just about the teams who go all the way – it’s often also a chance for some unlikely teams to get a crack at top opponents from across the continent.

We’ve taken a look back at some of the Premier League and Championship sides who have taken on some of Europe’s finest since the turn of the century.

Michael Laudrup’s Swans were handed a season in Europe after beating Bradford City to lift the League Cup and they breezed through two qualifying rounds to make it through to a group headlined by Spanish giants Valencia.

A potentially daunting trip to the Mestalla proved anything but, as goals from Wilfried Bony, Michu and Jonathan de Guzmán gave the Welsh side a 3-0 win, and they squeaked out of their group only to be rewarded with a knockout meeting with a Napoli side which had dropped out of the Champions League despite winning four of their six group games.

De Guzmán’s goal at the San Paolo meant Laudrup’s team were 15 minutes from making it through, only for Gonzalo Higuaín and Gökhan Inler to strike late to knock them out.

With FA Cup winners Manchester City already in Europe through their league placing, runners-up Stoke were handed a place in qualifying, and beat Hajduk Split and then Swiss outfit Thun to take their place in the group stages.

Drawn alongside Dynamo Kiev, Besiktas and Maccabi Tel Aviv, Stoke came up against Andriy Shevchenko and Ricardo Quaresma, but goals from the likes of Cameron Jerome and Kenwyne Jones helped them through to the knockouts with a game to spare, where Valencia awaited.

The Potters fell to a narrow 1-0 defeat at home before Tony Pulis angered some fans by leaving a number of first-teamers at home for the second leg. Jonas gave the Spanish side another one-goal win, and that was that.

Birmingham also found themselves in Europe that season, despite playing their league football in the second tier.

The League Cup winners had suffered relegation on the final day of the 2010-11 Premier League season after losing five of their last six games, but they still ended up running their European opponents very close indeed.

While the likes of Craig Gardner and Liam Ridgewell had moved on after relegation, those who stuck around had enough to take 10 points from a group containing Braga, Maribor and Club Brugge. However, it wasn’t enough for them to progress.

Furthermore, with Harry Redknapp jumping ship for Spurs after the first group game at Braga, it was down to Tony Adams to lead the charge, beginning with a home game against the Italian giants.

They defied the odds to open up a two-goal lead through Younes Kaboul and Kanu, only for Ronaldinho to halve the deficit with a delightful free-kick and Pippo Inzaghi to pop up with a stoppage-time equaliser.

Defeat at Wolfsburg sealed the deal, meaning the 3-0 win over Heerenveen – with Peter Crouch scoring twice – proved too little, too late.

After leading Bolton to a seventh-place finish, Sam Allardyce left Sammy Lee with the keys by the time European football was on the table, only for Lee himself to have made way for Gary Megson by October.

Nicolas Anelka helped secure a narrow passage into the UEFA Cup group stages, where they recorded a famous draw away at Bayern Munich thanks to goals from Ricardo Gardner and Kevin Davies.

Gavin McCann’s winner in Belgrade ensured the Trotters got through their group unbeaten, and it didn’t end there: El-Hadji Diouf scored the winner against Atlético Madrid in the last 32 despite the Trotters sitting 15th in the Premier League at the time, but a late Pereirinha strike saw Sporting Lisbon deny them a quarter-final place.

Birmingham aren’t the only team from outside the top flight to play in Europe this century. Millwall get an honourable mention for their first-round exit in the 2004-05 season, but Ipswich did more than that two years prior.

After running Internazionale close in the third round during the 2001-02 campaign, the Tractor Boys saw their league form dip, ending in relegation. However, their fair play record ensured a return to European competition.

Pablo Couñago netted a hat-trick in a qualifying round win over Luxembourg’s Avenir Beggen, and a teenage Darren Bent made the difference against NK Sartid of Serbia.

Bent had them within three minutes of beating Slovan Liberec too, only for the Czech side to level things up late on and win on penalties.