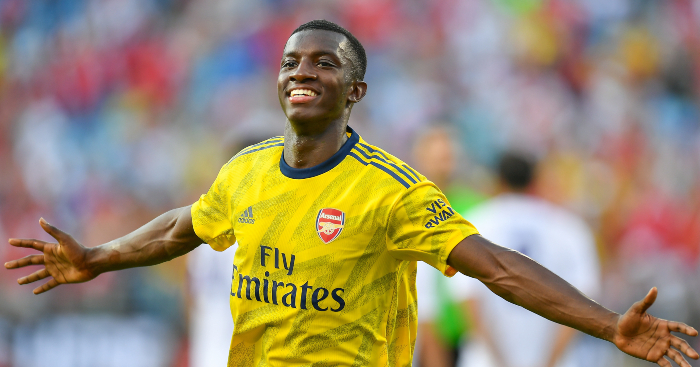 A number of young players at Premier League clubs have staked their claim for regular first-team action next season with some impressive displays in pre-season.

While it can be difficult for youngsters to break into first teams midway through a season, when the stakes are so high for managers, pre-season at least offers potential prospects the chances to prove to their bosses they can be trusted.

We’ve taken a closer look at six players who we could see more of in 2019-20 after a productive summer.

As an up-and-coming Manchester United attacker, being compared to Ryan Giggs by one of the Welsh winger’s former team-mates is about as good a compliment as you can hope for, and that’s exactly the kind of praise lavished on Greenwood by Ole Gunnar Solskjaer.

“He reminds me a little bit of the Giggsy story, you can’t really send him on loan and for me he’s ready to be in this squad,” Solskjaer said.

“The kid’s only 17 and he’s learning every day, training with these boys, he’s been with us the last few months and he’s grown in confidence, he’s grown in stature.”

Still just 17, Greenwood was given a brief taste of first-team football last term but has enhanced his chances of more action next season with goals against Leeds United and Inter – against whom he also pulled out a slick Maradona turn – so far this summer.

Having ruled out the chance of Greenwood leaving on loan, Solskjaer has also admitted the teenager has put himself in contention to start United’s opening Premier League fixture of the season against Chelsea on August 11.

Expected to leave Arsenal on loan last season, Nketiah ultimately remained in north London after Danny Welbeck suffered a season-ending injury but found opportunities hard to come by due to the form of Alexandre Lacazette and Pierre-Emerick Aubameyang.

Unai Emery has had to convince the striker to stay at Arsenal for 2019-20 rather than head out on loan to seek first-team football amid interest from Charlton and Bristol City, and the 20-year-old has responded by scoring three goals in two matches against Bayern Munich and Fiorentina.

“I said to him first be focused here,” Emery said after the victory over the Serie A outfit. “If you earn the right to be with us it’s because I can promise you that you are going to have minutes.

“But in those minutes you need to learn. And in the pre-season at the moment he’s playing like we want.”

Staying with Arsenal, Emery’s decision to replace Mesut Ozil with Willock midway through the second half of the Europa League final defeat to Chelsea appeared significant for two reasons.

One, it summed up his apathy towards the German. Two, it highlighted the faith he has in Willock’s ability.

Willock is one of 13 Arsenal youngsters given the chance to impress Emery on their tour of the USA and has caught the eye against Bayern Munich, when he played in a slightly deeper midfield role, and Fiorentina, against whom he scored the Gunners’ third and final goal.

Ozil may have to nervously look over his shoulder at the 19-year-old next season, telling the club’s website himself that he expects Willock to become a “big player”.

And Emery told Arsenal’s official website: “It’s all progress with him because last year he started with us in the pre-season. His performance today is very different to last year, maybe because he knows our idea and spirit better.

“He’s got a very big motivation and a very big ambition individually to make good performances, and he listens a lot to our idea.”

Joe Willock is the goal scoring midfielder we’ve been looking for. The heir to Aaron Ramsey’s throne

Brewster’s burgeoning career may have already suffered one major setback after sustaining a nasty injury that sidelined the 19-year-old for over a year, but Jurgen Klopp has stated his faith in the striker on a number of occasions.

Indeed, Liverpool handed Brewster a new five-year deal while he was still recovering from the injury, and he has shown just why he is so highly rated this summer with four goals in three pre-season appearances.

Daniel Sturridge’s departure from Anfield upon the expiry of his contract is expected to give Brewster more opportunities in Klopp’s first-team squad, but James Milner insists he won’t let the hype get to the teenager’s head.

“Every day is an ­opportunity for him to prove himself and ­improve again,” he said. “It’s a long path to get there and he is in amongst it straight away.

“If he wasn’t as grounded as he is that could be a problem but the good thing is that he is and he has got hunger.

“If he doesn’t have that and if ­maybe he wobbles for one second he has got plenty of senior players around him at Liverpool that will give him a kick up the arse.”

Rhian Brewster stepping up, putting his penalty top corner, and even getting a pat on the back from goalkeeper Hitz pic.twitter.com/WOlDicIzA0

There is a lot of expectation on young players at Chelsea next season as the appointment of Frank Lampard coupled with the club’s transfer ban is expected to lead to their hot prospects being afforded far more chances than they have in past campaigns.

While plenty of talk surrounds the likes of Mason Mount and Tammy Abraham, Gilmour has gone slightly under the radar but still caught the eye of Lampard during Chelsea’s trip to Ireland.

Now 18, the midfielder agreed to join the Blues from Rangers when he was still just 15.

“Billy Gilmour has had a brilliant trip,” Lampard told Chelsea TV. “As a young lad, the personality he has shown on this trip to play two games at the level has has played them is great.

“I just hope Billy pushes on with that this season.”

With more senior players now returning to training, Gilmour has missed out on Chelsea’s tour to Japan. Given the west Londoners were beaten 1-0 by Kawasaki Frontale in their first outing there, that might not be a bad thing for Gilmour’s prospects.

'One Billy Gilmour' is sung from the Chelsea fans. Fair to say he has made a real impression in his two games so far. #cfc

Much is expected of Leicester City next season after the Foxes have made a number of impressive signings to follow on to a promising second half of the season under Brendan Rodgers.

And Rodgers has also spoken of his excitement about Leicester’s young players, with nine members of the Under-23 squad taken to their pre-season camp in France.

“Looking at some of the younger players, I’ve been very pleased with them,” Rodgers told LCFC TV. “They’ve come away and coped very well.”

Leshabela, a 19-year-old South African midfielder, is one of the most intriguing prospects, drawing comparisons to James Maddison after one outing against Scunthorpe.

While he is yet to make his competitive debut for Leicester, Leshabela did make the bench under Claude Puel before being rewarded with a new contract.

Leshabela is having an influential match; quality on the ball, quick passing. If he improves his decision-making he'll be a real threat and a top prospect