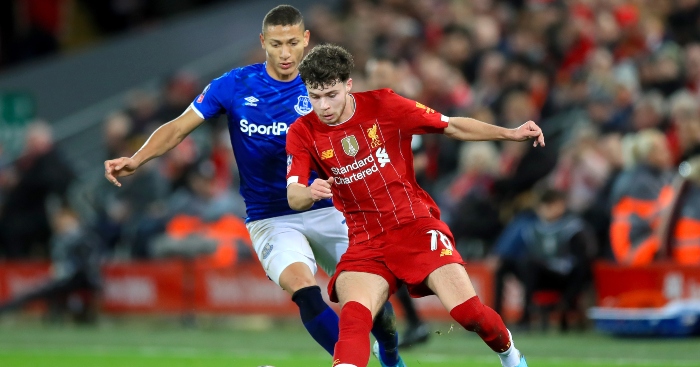 Managers may be criticised for rotating their line-ups in the FA Cup, but it at least offers opportunities for young players to benefit from first-team experience – highlighted by Liverpool‘s 1-0 win over Everton.

Jurgen Klopp gave a host of academy products a chance in the Merseyside derby and was rewarded with a stirring performance from his young side.

We’ve taken a closer look at six prospects to boost their first-team chances thanks to their exploits in the third round of the FA Cup.

Trent Alexander-Arnold is unlikely to surrender his right-back berth in Liverpool’s first-choice XI any time soon, but while Jurgen Klopp has often opted for Joe Gomez as a stand-in option, he may now have found a more comfortable back-up in Williams.

Whereas Gomez can look every bit a centre-half covering at right-back, 18-year-old Williams is a natural in the position, allowing Liverpool to attack as normal down the flanks in their victory over Everton.

The Wales youth international enjoyed more touches than any other player on the pitch in the Merseyside derby, following on from his display in the League Cup penalty shoot-out victory against Arsenal in which he made the most tackles and blocks for his side.

Sticking with Liverpool, Chirivella could be excused for feeling like something of a forgotten man at Anfield until this season. The midfielder made his one and only Premier League appearance for the Reds back in 2016 before spending the following two seasons on loan in the Eredivisie with Go Ahead Eagles and Willem II.

The only occasions Chirivella has made headlines since have been due to administrative errors, with a loan move to Extremadura last season scuppered due to a failure to register the player on time and Liverpool fined earlier this term for fielding him in the League Cup without the necessary international clearance.

At the age of 22, Chirivella may have seen the next crop of Liverpool youngsters beginning to make their way into the first team and felt like his time has passed, but he produced a superb display alongside Adam Lallana against Everton, taking control of midfield and setting the platform from which the hosts secured victory.

Amid all the excitement surrounding Chelsea’s young players, arguably the most high profile of them all, Hudson-Odoi, has felt like the odd one out at times this season.

After attracting interest from Bayern Munich before forcing his way into Maurizio Sarri’s plans, Hudson-Odoi committed his future to the club under Frank Lampard by signing a new five-year deal while still recovering from a serious Achilles injury.

Since making his return, the 19-year-old has struggled to regain his best form and has been largely forced to try to make an impact as a substitute.

Handed a rare start against Nottingham Forest, the England international opened the scoring and was involved in Chelsea’s second to earn praise from Lampard.

“It’s been an interesting 12 months for him considering how young he is, when you take that into account. Last year everyone was talking about him for different reasons. He gets a terrible injury, he comes back very early and when he did come back there were issues getting him tip-top.”

With Pedro potentially leaving Stamford Bridge this month, now’s a good time for Hudson-Odoi to start showing his best.

You’ve probably seen the interview by now – if you haven’t, start your week right by watching it below – in which Urhoghide cannot hide his excitement at having made his senior debut for Sheffield Wednesday.

But the defender’s unbridled joy has almost overshadowed his actual performance on his maiden appearance, helping Wednesday keep a clean sheet against Premier League Brighton on their way to an eye-catching 1-0 win.

The 19-year-old was released by Wimbledon at the end of last season and only moved to Hillsborough after impressing on trial, yet he was unruffled by the challenge of facing up against £20million forward Neal Maupay, who terrorised Championship defenders for Brentford last term and has seven goals to his name in the Premier League already.

With Nottingham Forest opting for a much-changed matchday squad that featured 10 academy graduates, a trip to Stamford Bridge was a tough challenge for their youngster to stand out.

A 2-0 defeat may not sound the most inspiring, but Mighten still managed to catch the eye in attack. Aged just 17, he caused problems for Andreas Christensen and Fikayo Tomori and appeared to win a penalty, only to be ruled offside by *sigh* VAR.

Mighten’s only previous first-team experience came with a 12-minute cameo in a 5-0 defeat to Arsenal earlier in the season, but with Forest hardly blessed with options up front and Rafa Mir set to be recalled by Wolves, the England youth international may find opportunities soon present themselves in the Championship.

After making his Premier League debut as a substitute on New Year’s Day, Idah followed that up with a start for Norwich City against Preston North End and became the youngest player to score a hat-trick in the FA Cup from the third round onwards since Ian Lawson in 1957. It’s unlikely you’d have backed that in any FA Cup betting with 888 going into the weekend.

With Norwich struggling for goals and Teemu Pukki struggling with injury, Daniel Farke could do worse than turn to a fearless 18-year-old coming off the back of a hat-trick.

Farke had planned to send the Republic of Ireland youth international out on loan this month but said afterwards: “We’re in the driving seat and as long as he is scoring goals for us, we won’t want to loan our best players out. There is no rush to make a decision.”