‘So lucky for four glorious years’: 23 Leeds fans on what Bielsa achieved 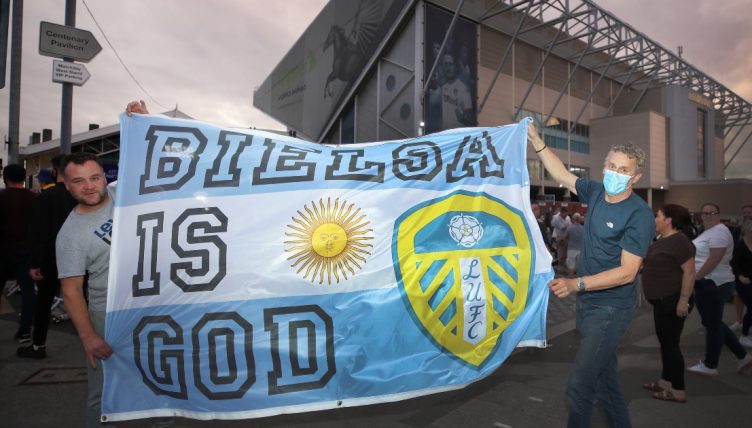 Leeds United have parted ways with Marcelo Bielsa and the mood within the fanbase can be summed up in two words: absolutely gutted.

The legendary Argentinian manager’s four-year reign has come to a sad end, with the board deciding to look to another coach for their relegation battle run-in.

He was sacked after Leeds’ 4-0 defeat at home to Tottenham yesterday, a result that’s a continuation of their recent defensive struggles: in February they conceded a record number of goals for a Premier League side in a single month and have picked up just one point from the last six available.

In spite of that form, the reaction on social media has been united behind the 66-year-old manager, who will no doubt remain a beloved figure at the club. There is some anger at the board for taking the decision, while many have questioned their lack of investment this season – particularly in the January transfer window.

Posts on Twitter have expressed little but love and gratitude towards Bielsa, for his character and decency as much for the unforgettably exciting style of football he instilled at Elland Road and the long-awaited promotion he led them to in 2020.

We’ve taken a look through and picked out 23 responses to summarise what he means to the fanbase. It’s evident that he’ll always be remembered as a Leeds United legend.

Football is an unsentimental, unforgiving business, but whatever happens from here, Marcelo gave us this. And it was beautiful. #LUFC pic.twitter.com/0Z1JhBlgHp

Bielsa is one of the last bastions of an ideology that rages against the unfair, corporate, money-obsessed machine that modern-day football has become. Unrelenting, uncompromising & absolutely fearless. We won’t see his like again. It was sublime. #LUFC #ThankYouMarcelo

One other thing to credit Bielsa for is getting us through the pandemic. In the most miserable, death-filled, isolated days it was punctuated by some magnificent football and leadership. Literally the only good thing some weeks. It got a lot of us through.

Sounds cheesy but Bielsa changed my life. He got me painting,which got me out of v dark places. Promotion: amazing but more imp, while 'other' leaders acted shamefully, he's shown integrity, morals honour, honesty. He got my son to hug me.Whatever happens, 4ever grateful.#lufc

Thank you Marcelo. For bringing a broken fan base together. For giving a city pride. For some of the greatest football I’ve ever seen from white shirts. For showing decency can win. For making us want to be better. For final joyful moments with my dad I will cherish forever 💙💛 pic.twitter.com/2zjuITnda4

No matter what happens. Marcelo Bielsa will sit in the pantheon of Leeds's great managers. He transformed the team, a club, a city. He's earned our love. We should always value what he brought. If a split ownership brought the downfall it's on them, not him

Bielsa helped to get me through the hardest period of my life when I was in really bad place mentally. I wrote to him to tell him how pivotal he and the team were in getting me through the hard times and received this from him. It will always be treasured. Gracias, Marcelo. pic.twitter.com/s5H6YJEcUv

A letter of thanks to Marcelo Bielsa.

We've also created a platform to allow fans to share their own messages, which we will then collate and share with him. https://t.co/WvMrxcQ3k9#GraciasMarcelo pic.twitter.com/QB3PE2grRe

I love this man #lufc pic.twitter.com/NwQT5UGODR

As another ex-manager said, “I think it’s a very sad day for Leeds and a sad day for football.” Only way this decision will be vindicated is if we stay up. So let’s see what, and who, tomorrow brings. But I doubt we’ll see a man of Bielsa’s ideals, morals and decency again. #lufc

Marcelo Bielsa is the greatest man to be associated with Leeds United in my life, but this is it.

Marcelo Bielsa taught Leeds United and English football about loyalty, respect and decency. It’s a shame the club’s board didn’t learn from him. #lufc

Marcelo Bielsa rekindled a passion for football in me when I was I’ll be honest, done. I’ve never loved and respected a manager of this club as much. Just let it end with the sort of dignity, professionalism and integrity which have always been his guiding principles. #lufc

Marcelo Bielsa was never about points on the board or places in the table, it was about being stuck in a cold cynical world and having something to believe in. If it has to end I'm just so, so glad it happened.

Thank you Mr Bielsa for everything you have done for my family, Leeds United and the City of Leeds. You gave us all something to be proud of. We will be forever in your debt ❤️ pic.twitter.com/mmZBQkPl7W

So now it’s official and the Bielsa era is over. Today is a very sad day and I think @LUFC and @andrearadri have handled this situation terribly. Bielsa will live on in our hearts and minds long after the current board have left Elland Road. Thanks for everything Marcelo. pic.twitter.com/ZXNylwc7mn

The man who made Leeds United great again. A wonderful man who has brought me so much joy and happiness.

So upset reading this, but also so happy looking back at what this man has done.

Absolutely heartbroken about Bielsa. It didn't have to be like this. And much as I'm grateful to the board for where they've helped to take the club, they're also partly to blame. Either way…a very sad day for #LUFC 😢#GraciasMarcelo 🤍 pic.twitter.com/3XYDGEw9N0

What a wonderful man he is. Gave me one of my happiest memories, marching my kids round North London during lockdown, belting out Marching on Together. Club never deserved him. pic.twitter.com/01QCdGjgpM

Love Bielsa forever. Redefined my relationship with my club, city and fellow fans. Gave me a perspective I never saw before and probably never will again #lufc

Could live to a hundred and I doubt I’ll see another coach make the impact & work the miracles Bielsa did at Leeds. Maintain there’s not another manager on the planet that could’ve done what he did when he arrived. #lufc

Marcelo Bielsa the manager of lufc personally called up my dying mum to chat to her and I will always love him for that above all else.

My hero. My favourite ever manager. A phenomenal human being. He changed the way I think about the game. Brought Leeds fans closer. Influenced the way I approach my life. A legendary coach. A genuine Leeds United legend. We were so damn lucky for four glorious years. Icon. 💔 pic.twitter.com/wwGNc8IVpQ