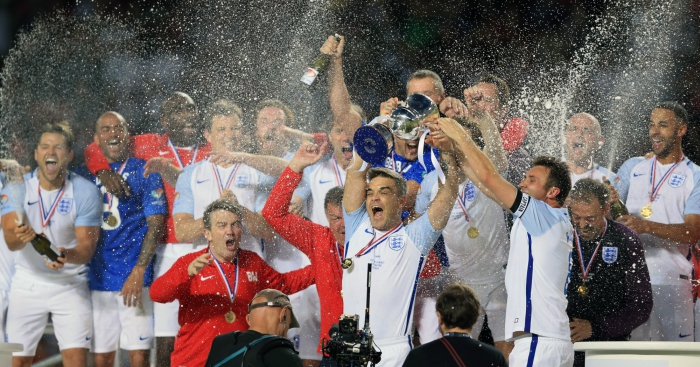 Soccer Aid returns to Manchester United‘s Old Trafford in 2018, with Usain Bolt announced as captain for the Rest of the World.

Bolt will join Robbie Williams in leading out two teams made up of celebrities and footballing legends on June 10, with all proceeds going to UNICEF.

The match brings together some unlikely combinations and a wide range of abilities, meaning entertainment levels are usually quite high.

We’ve taken a look back over the years and picked out our favourite weird, wacky and genuinely brilliant moments that Soccer Aid has brought us.

Hands down the best goal ever scored at Soccer Aid. Wayne Rooney said after the match it was “the best goal I’ve seen at Old Trafford in the last five or 10 years”.

The beauty of Soccer Aid is seeing some of the true greats back on the pitch once more. Clarence Seedorf, Ronaldinho and Zidane have all rolled back the years for the charity match.

Then, when they beat someone or perform a bit of real high-quality skill, there’s something magical about it being against someone you’d never expect.

On that note, Soccer Aid 2014 threw up a very bizarre rivalry between the former Netherlands midfielder and Robbie Williams’ vice-captain.

They had a serious-looking on-field tussle after Davids fouled the former Everton youth player.

When managing the Rest of the World side in 2014, Mourinho was known to be taking the event extremely seriously – even substituting Man vs Food star Adam Richman on for just five minutes before bringing him back off in his attempts to win the match.

In the same game, he spotted Olly Murs unmarked right in front of the dugouts, so he took matters into his own hands.

One of the true beauties of Soccer Aid is when some of the celebrities don’t know what they’re doing.

Ben Shephard getting sent off

The host of Goals on Sunday is known for being a bit dirty in the matches, but nobody expected a red card to come out of Jon Moss’ pocket in the “friendly” match. Definitely deserved, mind.

Scoring in the penalty shootout on the weekend of his 50th birthday, The Chase presenter celebrated in a typically entertaining way.