Solanke, Lookman, Cook & the stars of England’s Under-20 team 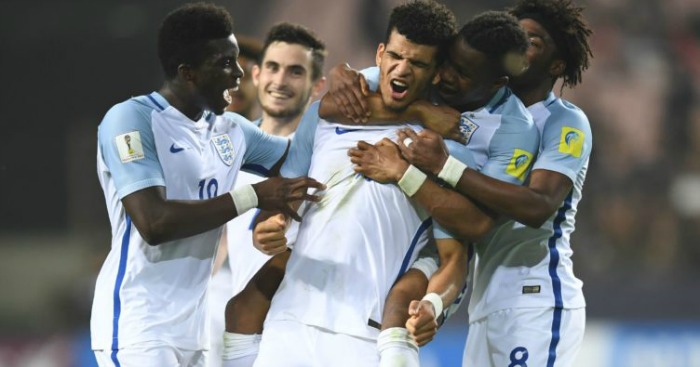 Liverpool, Tottenham and Everton have a bright future judging by their young starlets’ displays in helping England’s Young Lions reach the final of the Under-20 World Cup for the first time.

England beat Italy 3-1 to progress to Sunday’s final in South Korea where they will face fellow underdogs Venezuela, who beat Uruguay.

They will now be competing against each other, with England becoming the nation’s first men’s team to reach any World Cup final since the senior side in 1966.

They will not be underdogs in the final, but Paul Simpson’s side can hold their heads high irrespective of how they adapt to the favourite’s tag against Venezuela.

“We are changing everyone’s perception of English football,” Simpson has said.

Solanke has received a fair amount of media attention over the last few weeks due to the announcement that he will soon be leaving Chelsea to join Liverpool.

The 19-year-old was nothing short of outstanding at junior level for the Blues, scoring 41 goals for Chelsea Under-21s in the 2014-15 season. He then went on loan to Dutch side Arnhem Vitesse in 2015-16, scoring seven times and continuing to catch the eye.

However, Solanke made the headlines last year for reportedly demanding £50k-a-week from Chelsea, an amount they were not willing to part with. Negotiations broke down, and it was announced last month that he will make the switch to Anfield on July 1 for a compensation fee expected to be around £3million.

Solanke has represented England at all youth team levels and could represent a bargain for Liverpool if he reaches his full potential. Versatility is another big part of his game; the Basingstoke-born forward can play all across the front line or in behind the striker.

Former Chelsea striker Tore-Andre Flo has praised Solanke too: “He’s quick but often what impresses me the most is when he looks like he’s lost the ball, he somehow manages to get out with the ball, no matter how tight the situation is or how difficult it looks.”

He has four goals in the tournament so far, including two in the semi-final success against Italy.

Captain Cook has been the lynchpin that has held England together at times, thriving as an exceptional passer of the ball as well as possessing great anticipation and positioning.

The midfielder came through the youth system at Leeds United, an academy renowned for producing top quality players, and Cook was no exception.

He made his first league start for the Whites in 2014 aged just 18, alongside fellow academy graduates Alex Mowatt, Charlie Taylor and Sam Byram.

Cook spent 12 years at Leeds in all, before Premier League Bournemouth came knocking last summer and the 20-year-old decided to take the step up.

He was in the starting XI for the Cherries’ opening game of the 2016-17 season against Manchester United but struggled with an an ankle injury before returning towards the back end of the season.

Nonetheless, the 2016 Football League Young Player of the Year remains one of England’s brightest talents, and he is in a position to thrive under Eddie Howe’s stewardship.

Born and bred in Sheffield, the current Everton man joined the Sheffield United academy in 2005 aged just eight years old. A decade later he made his professional debut for the club in a 1–1 draw away at Leyton Orient.

Despite being a highly-rated Blades prospect, he was loaned out to Northampton Town for the 2015-16 season, making an instant impression as he scored on his debut.

Calvert-Lewin then signed for Everton last August in a deal believed to be worth around £1.5million, making his debut for the club as a substitute against Arsenal.

He scored his first goal for Everton in the Premier League against Hull on 18 March as the Toffees hammered the Tigers 4-0.

Based on his performances so far in the competition, Lookman has arguably been England’s most impressive asset at times.

He bagged a brace in the Round of 16 against Costa Rica as England won 2-1 and scored the second goal in a 3-1 semi-final victory over Italy.

After joining Charlton Athletic’s Under-18s in 2014, Lookman made a rapid ascent into the first team.

His debut followed in Novemeber 2015, and he scored his first goal for the club a month later against Brighton, which he then followed up with a brace in his next game.

The striker was always destined for bigger things and Everton secured his signature in January for a fee which could rise to £11million. In fitting style, he scored on his debut against Manchester City.

Tottenham fans know who Walker-Peters is, but for other fans of the Premier League he may be somewhat of a mystery.

That said, the full-back has received huge praise from England supporters, particularly after his display in the semi-final win against Italy.

Walker-Peters played the wing-back role to perfection, stopping opposition attacks down his side and proving to be a constant menace at the other end with his smart, overlapping runs.

The future looks bright for the 20-year-old, with reports suggesting that he could be in line for more opportunities in Spurs’ first team should the similarly-named Kyle Walker leave the club this summer.

A scouting report from The Sun summed Walker-Peters up well, describing him as having ‘all the guile of a No 10’ but also ‘the pace of a seriously nippy winger’.

He may have started the game on the bench, but those who saw his performance in the semi-final will understand the hype regarding Ojo.

The story of Ojo is remarkable in itself. He joined MK Dons’ academy aged 10, and by the age of 13, he was playing for the Under-18s and had trained with the first team.

Liverpool fought off fierce competition to sign Ojo for a fee of £2million in 2011. He was still just 14 years old.

Loan spells at Wigan and Wolves followed, but the Hemel Hempstead-born forward scored his first competitive goal for Liverpool in an FA Cup match against Exeter in January 2016, a day after being recalled from from a loan spell.

As the third-youngest member of the current U20 squad, it’s fair to say Ojo is rightly attracting the plaudits.