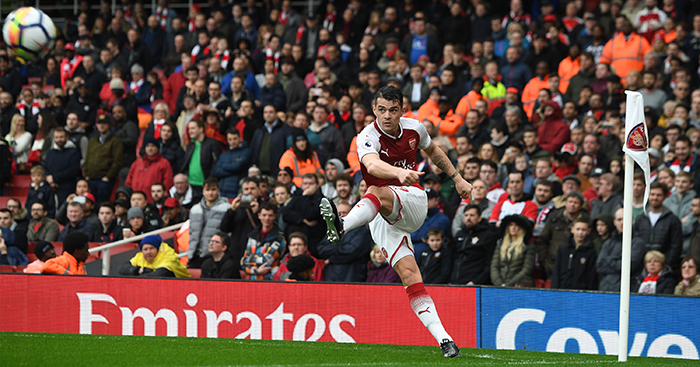 Arsenal, Bayern Munich, Juventus and Real Madrid have some of the best corner conversion rates across Europe’s top five leagues – but Chelsea were at the opposite end of the scale.

Reddit user Stuart Reid (u/reids1) has collected data from England’s top four leagues, plus La Liga, Serie A, the Bundesliga, Eredivisie and the Portuguese Primeira Liga, relating to the number of goals scored from corners.

The feeling when your side gets a corner is a bizarre one, as if this is a really big chance to score a goal – and don’t even get us started on the goalkeeper coming up – but the reality is it’s quite unlikely that you will score.

We’ve taken a look at the stats, which are judged by a goal being scored within five seconds of a corner being taken, and found the best and worst corner takers in Europe.

You can view the stats in full here.

In the Premier League, relegated sides West Brom and Swansea City scored nine and eight goals from corners last season, both with just over 5% conversion rates.

The average in England’s top flight is a conversion rate of 2.46%, which is around the average for all leagues, with seven sides including Arsenal and Newcastle United netting from over 3% of their corners.

It is the Bundesliga that boasts the highest conversion rate of all the leagues at 2.91%, meaning that you can usually expect to see less than three goals from every 100 corners taken.

Bayern Munich finished last season with a conversion rate of 4.04%, while Freiburg had the second best of anyone surveyed at 6.30%, behind Portuguese side Feirense (6.37%).

Napoli and Juventus scored the most goals from corners in Serie A with 11 and seven respectively, while Real Madrid netted 10 in La Liga.

Chelsea managed to not concede a single goal directly from a corner all season, a feat only matched by Birmingham City and Inter Milan out of all the leagues surveyed.

Manchester City conceded from a corner just once, though only facing 103 sees their rate of concession at 0.97%.

Across Europe’s top five leagues, it is Napoli who have the best goal difference when it comes to goals scored and conceded from corners with +9.

Porto also have an impressive corner goal difference of +9, while Dutch side PSV scored from eight more than they have conceded, numbers only shared by League One side Wigan (+9) and League Two’s Newport (+8).

Despite their defensive prowess, Chelsea converted just two of their 230 corners last season, at a rate of 0.87% – the only team in the Premier League under 1%.

Of all the teams surveyed, Nottingham Forest were the only side who failed to score from a corner all season, with 224 set-pieces all coming to nothing.

Ligue 1 had the lowest average conversion rate overall with just 1.84% of every corner taken being scored, though four teams in Serie A had a conversion rate lower than 1%.

Correct me if I am wrong…

Nottingham Forest did not score a goal directly from a corner last season….? #nffcfamily #nffc pic.twitter.com/BlIHw657bD

In the Premier League, Crystal Palace and Leicester City both conceded nine times from corners throughout the 2017-18 campaign, though Tottenham had the highest percentage of corners against them converted, with teams scoring from 4.38% of the 160 set pieces they gave away.

Portuguese club Rio Ave conceded from corners most frequently, with teams scoring against them from 4.79% of the corners they conceded in the Primeira Liga.

Bury were close behind with 4.78%, though they were one of just two sides across all divisions who conceded more than 10 times from corners, with 12 goals coming against them from corner kicks as they finished bottom of League One.

As one of the three sides across all surveyed leagues to concede 10 times from corners, Nottingham Forest have the worst goal difference thanks to their lack of potency in front of goal.