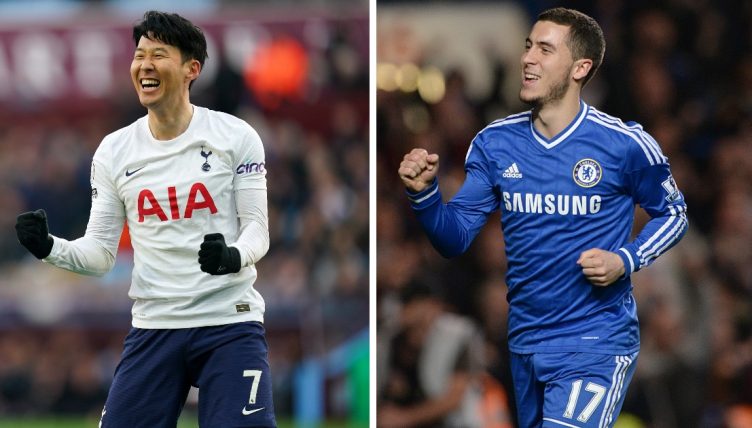 Son Heung-min has been a sensational signing for Tottenham – but how does his Premier League record compare with Chelsea legend Eden Hazard?

Son joined Spurs from Bayer Leverkusen in a £22million deal in 2015 but initially struggled to adapt to English football in a difficult debut season.

He reportedly wanted to return to Germany in the summer of 2016 but Mauricio Pochettino was able to talk him away from the exit door.

The South Korea international has since gone from strength to strength, establishing himself as one of the best players in the Premier League.

“We are talking about a really world-class player,” Spurs boss Antonio Conte said in December 2021. “I have seen him before becoming manager of Tottenham, but only on TV. He impressed me a lot.

“But when you have the possibility to train him and become his coach, you can see really the quality of this player. It’s fantastic because he has quality but also runs, [adds] intensity and resilience also.

“I think that Sonny is a top player. Not a good player – a top player. For sure I try to improve him, to help him, but we are talking about a player that is now already at an important level.”

The 29-year-old has recently moved up to 44th in the Premier League all-time goal-scoring charts, overtaking Hazard in the process.

Hazard joined Chelsea from Lille in 2012 and spent seven years at Stamford Bridge before completing an £89million move to Real Madrid.

During his time in the Premier League, he won two league titles and was named in the PFA Premier League Team of the Year on four separate occasions.

We’ve compared Son and Hazard’s Premier League records to see who comes out on top.

As the stats show, Son has scored more Premier League goals in fewer appearances and also averages a direct goal contribution on a more regular basis.

Admittedly, the Tottenham forward is yet to get his hands on the Premier League trophy but that’s not due to his own performances.

Any excuse to watch his 2020 Puskas winner 👋 (🎥 @SpursOfficial) pic.twitter.com/27smh6fmdF