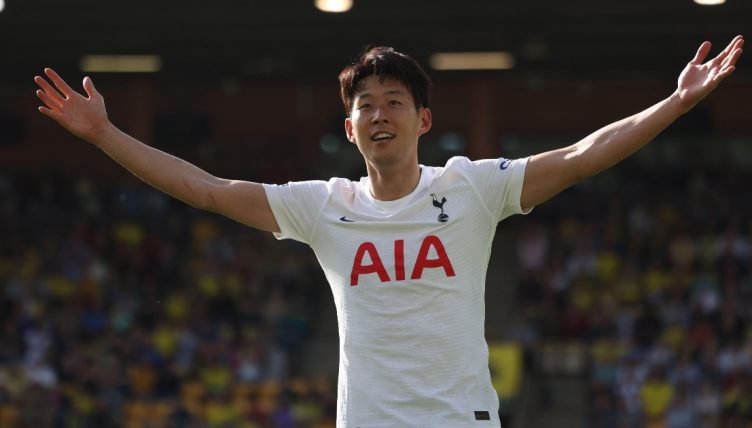 Tottenham forward Son Heung-min is undoubtedly one of the best players in the Premier League. He’s also one of the loveliest men in football, by all accounts.

It’s rare for a footballer to be universally loved in this day and age, given the tribal nature of the game, and Spurs have no shortage of heated rivalries. But Son is one of those scarce examples of a footballer that transcends all that. You’d have to have a heart of steel to have an issue with him.

Here are 10 times he’s been the nicest bloke in the world.

Son looked the picture of a doting uncle as Tottenham’s players paraded their kids around the pitch following the final home game of the 2018-19 season.

There’s no doubting the rapport Son shares with his team-mates when you see how naturally he bonds with their children, particularly Erik Lamela’s and Christian Eriksen’s.

Son Heung-Min has signed a new four-year contract with Tottenham.

Quite possibly the nicest guy in football ❤️

A report in The Telegraph published earlier this year went into great detail about how Son has become one of the Premier League’s standout players and the kind of character he is off the pitch – noting that he’s just as likely to sit and have lunch with a rising academy player as he is a fellow superstar like Harry Kane.

One particular detail stood out: the 30-year-old forward has paid for a top chef to come to Tottenham’s training ground and cook high-end Korean food for all the behind-the-scenes staff. He’s also sent “heartfelt messages” to office workers when they departed for new jobs.

Son marked his 100th appearance for South Korea with a brilliant injury-time free-kick in a friendly against Chile over the summer.

But the most memorable moment of the game was when he intervened to try to break up a heated argument between two players. Not his own team-mates, we might add, but two of Chile’s players.

A career as a UN diplomat surely beckons after he calls time on his football career.

He is also the captain of Chile😂 pic.twitter.com/v15KpnpQRC

We might’ve found something that rivals Bale’s love of Wales and golf.

“In the world, I would probably say,” he responded when asked by Sky Sports if Son is the nicest man in football.

“He literally is. No matter what it is, he’s always happy apart from when we lose. Then he’s sad for a couple of hours but then his smile comes back. He’s an amazing guy. He’s definitely the nicest guy on the planet.

“Just his personality in the dressing room, he’s always smiling, joking, laughing and he also picks up everyone around him. His smile just cheers the room up.”

🗣”Playing with them is why I came here."

In April 2019, Son donated £100,000 for rescue operations and overcoming the aftermath of a forest fire in Goseong County, which was declared a national disaster by the South Korean government.

“It’s nothing compared to what the victims have sacrificed. Although I’m living abroad, I know what’s happening in my home country,” Son told Goal.

“I think it’s something I should do when there’s a big disaster in my home country. I believe money does not matter. The most important thing is a mind to do something for the victims.”

The following year he and Park Ji-sung made a sizeable donation to victims of coronavirus in South Korea.

Serge Aurier’s brother, Christopher, was shot dead in a shocking incident in July 2020.

The Ivory Coast right-back asked Jose Mourinho to start him in a Premier League match away to Newcastle just two days later. Son scored the opener in a 3-1 win and paid tribute to Christopher Aurier before embracing his team-mate.

A nice touch from Heung-min Son to dedicate his goal Vs Newcastle to the recent death of Serge Aurier’s brother.

Ahead of a 1-1 draw with Sheffield United back in November 2019, a particularly rainy night in north London, Son protected his designated mascot from the elements with a hand-made – literally – roof.

Son Heung-Min covering a mascots head from the rain, what a legend.

He's got such a pure soul and is so humble!

When the Tottenham squad arrived in Seoul for a pre-season friendly this summer, Son was waiting at the airport with a sign to give them a taste of local hospitality.

He shook hands with team-mate Harry Kane as well as gaffer Antonio Conte and CEO Daniel Levy after they touched down in the South Korean capital.

Son also penned them a touching note about what it meant to have his club in his home country.

“Welcome to Korea,” it read. “I missed you, brothers! It is very meaningful that you came to my country I know it’s a busy schedule, but I hope we have a great time with good energy and great memories!

“And I want to take this opportunity to say thank you very much, I’m always happy to be with you in Tottenham and I’m proud of the goals we achieved together. Thank you always. Let’s go for this season something special. Sonny.”

New Malden, a suburb in the southwest of London, is also known as ‘little Seoul’ thanks to its sizeable local Korean community, the largest in the United Kingdom.

Back in 2019, CNN produced a wonderful feature about the community and what London’s most famous South Korean means to them. He’s an icon in his home country and a local hero in one corner of the city where he plies his trade.

“Son’s success has inspired the younger generation here,” You Mie, a journalist and part-time waitress at her parents’ restaurant told CNN. “You see them now with his name on the back of their shirts, which you never had before.

“Now the kids are reading newspapers just to see if Son is in there. I have parents asking me how to get their child into football. They see how hard he works, his work ethic and people admire that about him.”

Son looks to be one of those footballers that realises what a privileged position he’s in as a footballer and how small and simple gestures can mean the world to the young Spurs fans that adore him.

There are numerous examples of little classy touches from the South Korea international when it comes to bringing joy to his supporters.

Four-year-old Delilah Thorpe was overjoyed after Tottenham Hotspur striker Son Heung-min waved back to her before the team's game against West Ham.

READ NEXT: The 4 players Spurs signed alongside Son Heung-min and how they fared

TRY A QUIZ: Can you name Spurs’ XI from Harry Redknapp’s last game as manager?