Who is Spurs target Juan Foyth and is he any good on Football Manager? 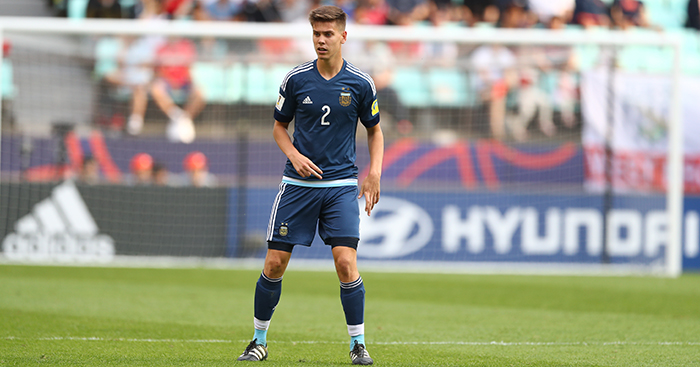 Tottenham are rumoured to be among the clubs keen to sign Juan Foyth from Estudiantes, but who is the 19-year-old and is he any good?

Numerous outlets ran a story over the weekend quoting Foyth as saying his agent was due to fly to London to discuss an offer from Spurs, but those stories were seemingly the result of some erroneous translation.

What Foyth actually said in a radio interview is that he had seen reports on social media claiming that his agent or Estudiantes president Juan Veron were heading to London but that “I haven’t been told anything about that.”

He also went on to say: “No, no … I’ve never spoken with Mauricio Pochettino or with anybody from Tottenham.”

However, Argentinian newspaper El Dia, who have published a fresh interview with Foyth in which he says he wants to play in Europe, continue to insist he is on the verge of a €10million move to Spurs.

So who exactly is Juan Foyth?

Foyth is a Buenos Aires-born centre-back currently plying his trade with Estudiantes. He has appeared only seven times for the fascinatingly-nicknamed ‘Rat Stabbers’, having made his first-team debut in March.

It was a former Arsenal defender who promoted Foyth to the first-team ranks. Nelson Vivas, who played 69 times for the Gunners between 1998 and 2001, gave the youngster a first start on March 19 in a 1-0 win over Patronato.

Foyth has been a mainstay in the heart of Argentina Under-20s’ defence through a turbulent 2017. He has made 12 appearances: nine at the South American Championship in Ecuador, and another three during their miserable Under-20 World Cup campaign, when they were beaten 3-0 by eventual champions England in their opening game and failed to progress past the group stage.

What you need to know

Foyth was a late starter as a centre-half. Through the youth ranks at Estudiantes he was a No.10 until he was shifted further back at the age of 16.

As a ball-playing centre-half who likes to bring possession out from the back – “one of my best virtues,” he says – it perhaps comes as no surprise that a Barcelona defender is named by Foyth as one of his heroes.

“I like European football. There I try to copy Mats Hummels and Gerard Pique.”

Atletico Madrid were credited with an interest when he broke into the first team at Estudiantes, and he was also said to attracting attention from France. Roma were reported last month to have made an offer, which certainly appealed to the player.

“Roma are one of the most important clubs in the world, so anyone would love to play there,” he said. “It’d be wonderful!

“It’d be marvellous to play at the Stadio Olimpico. I saw Francesco Totti’s farewell to the crowd and he represents the best of the club. The love he showed for the Giallorossi jersey is indelible and the whole world will remember him forever.”

Zenit Saint-Petersburg reportedly outbid Roma, news that received a rather more lukewarm welcome from Foyth: “I would not go to Russia right now. If I do go it is not because I want to, but rather to help the club out economically.”

Now it appears he is set to move to the Premier League with Tottenham.

Is he any good on Football Manager? 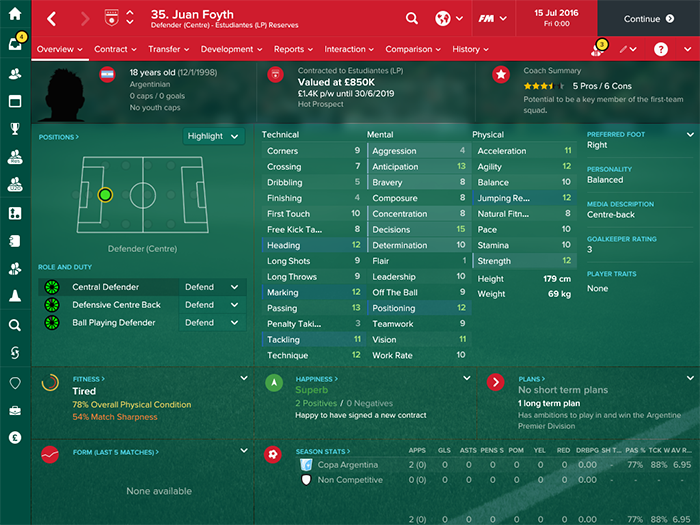 The simple answer is not particularly. Having only recently shot to prominence, Foyth’s was valued at just £850,000 on FM17, though his passing and technique ratings are an indication of a youngster already catching the eye of the game’s many scouts.

His 15/20 for decision making is particularly promising, but Foyth’s stats on FM18 are sure to be vastly increased regardless of where he ends up.