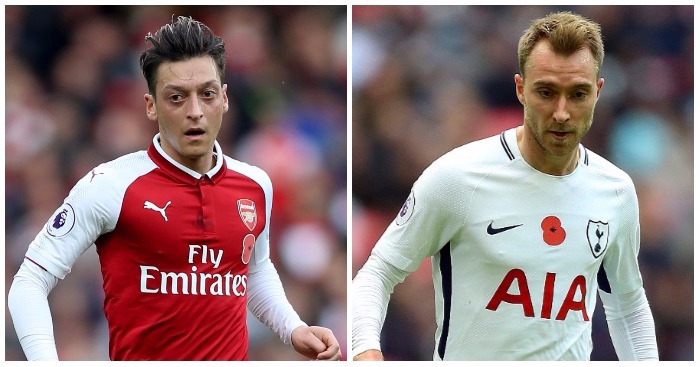 The Premier League returns from a two-week break on Saturday – and it restarts in the best possible fashion with a north London derby between Arsenal and Tottenham at Emirates Stadium.

Tottenham beat Crystal Palace in their last game before the internationals to move level on points with second-placed Manchester United in the Premier League a fortnight ago, but Arsenal were beaten 3-1 by Manchester City and find themselves down in sixth place, four points behind their local rivals going into Saturday’s game.

Spurs have not won in any of their last seven visits to Arsenal, albeit they have drawn the last three, but with Harry Kane and Dele Alli both expected to be fit, and Christian Eriksen scoring a hat-trick for Denmark in the week, Mauricio Pochettino’s men will fancy their chances of ending that run.

However, once they all click, Arsenal will feel they have a front three to more than rival Spurs’ in the shape of Alexandre Lacazette, Alexis Sanchez and Mesut Ozil.

Despite Eriksen’s current mood and form, Kane is the most obvious threat to Arsenal. The centre-forward will be well rested after sitting out England’s friendlies and looking to continue his record of having scored in every Premier League he has come up against Arsenal.

His form of late suggests the Gunners should be wary of a repeat as, despite his usual drought, Kane is currently the league’s joint-top scorer with eight goals.

That is only two more than Lacazette, who has played two hours’ less football, but Kane’s minutes-per-goal ratio of 109 minutes per goal is still superior to that of the Arsenal man. However, Lacazette has scored in five games to Kane’s four.

Of the support acts, Alli and Eriksen have each scored three goals, whereas Sanchez and Ozil have only one apiece.

Despite only scoring two more goals, Kane (40) has had more than double the number of shots of Lacazette (17).

He is more clinical when it comes to what Opta define as big chances, however, with the England man converting six of his 10 (60%) in comparison to Lacazette, who has finished off only three (43%) of his seven big chances.

Sanchez has had the most shots (20) after Kane but has failed to convert either of his big chances so far, while Ozil has scored one and missed one of his.

Eriksen has taken the only big chance to land at his feet, whereas Alli has been presented with five but only scored two (40%) of his.

Ozil has created more opportunities for his team-mates than any other Arsenal or Spurs player.

Despite some believing the soon-to-be-out-of-contract star has already mentally checked out of the Emirates, Ozil has set up 30 chances for his team-mates, which is six more than Spurs’ most creative presence, Eriksen.

Despite Ozil’s greater creativity, he only has the same amount of assists (2) as Eriksen, with Kieran Trippier (four) leading the way in that respect.

The Arsenal trio of Aaron Ramsey, Sead Kolasinac and Granit Xhaka are only one behind the Spurs wing-back. Alli has so far laid on only one goal, as has Kane, with Lacazette yet to set up a team-mate

The two teams are still tied on goals scored with 20 each, but the big difference is that Arsenal have conceded 16 goals compared to Spurs’ seven.

It leaves the Gunners with two concerns ahead of the weekend’s derby: Can they make the most of the chances they will inevitably create; and can they deny Kane good opportunities at the other end?