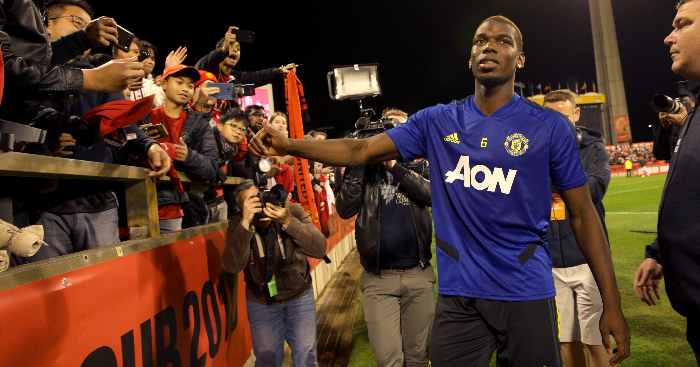 Paul Pogba’s status at Manchester United is set to remain a frequent fixture of the gossip columns for weeks to come.

The Frenchman’s time back at Old Trafford hasn’t exactly lived up to the hype after he made the switch from Juventus three years ago, with two trophyless years and a disappointing sixth-place finish last season.

But he’s nevertheless shown what he can do, especially for France as they lifted the World Cup, and Real Madrid reportedly remain interested. Here are five replacement options that United could look to if he goes, and how they compare to Pogba.

Maddison has hinted he’s happy to stay at Leicester for now, but he fits the profile of young British talent targetted by Ole Gunnar Solskjaer.

He enjoyed an exceptional first season with the Foxes, and turned heads for his ability to create chances – he created 13 big chances, six more than Pogba.

In the Premier League, Pogba was ahead in terms of goals (13 to Maddison’s nine) and assists (nine to Maddison’s seven), although Maddison came out on top in terms of non-penalty goals (eight to Pogba’s six) and free-kicks (three to none).

Pogba was also a more accurate shooter, with 65.79% accuracy (Maddison’s was 47.46%), but that’s partly down to Maddison’s willingness to shoot from distance, which paid dividends with four goals scored from outside the box, while Pogba scored one.

Lazio’s Milinkovic-Savic, arguably the most established high-profile talent not currently at one of Europe’s biggest clubs, has long been linked with United.

In terms of a powerful, dynamic presence in midfield Milinkovic-Savic would fit the closest profile to Pogba. He’s also shown an ability to step up, scoring in the final last season as Lazio won the Coppa Italia.

The Portugal international has just enjoyed an absolutely sensational campaign with Sporting. Manchester City and Liverpool were also alerted to his talents thanks to his prolific goalscoring exploits.

Fernandes scored 31 goals in all competitions for Sporting in 2018-19, which is equal to Pogba’s total tally over the last three years at United, 16 of which came last season.

With the arrival of Frenkie De Jong, Rakitic’s days in Barcelona’s colours could be numbered and it’s long been suggested that the club are trying to show him the door.

One of the Croatian international’s biggest assets has been his versatility and willingness to be whatever the club wanted him to be, which often involved working diligently and pressing in midfield. Although at the age of 31, there’s questions about whether he’ll maintain that energy going forward.

He can be an attacking threat if he’s utilised that way. He scored 12 league goals in his final season at Sevilla, for example, which is as many as the last three years combined at Barcelona.

Last season in La Liga, Rakitic scored three goals and provided five assists. He also averaged 0.9 tackles per game, 0.5 key passes and 1.1 shots per game, fewer than Pogba in each regard.

Unsurprisingly at Barcelona, his passing stats were impressive: 91.4% accuracy with an average of 74.6 per game is significantly more than Pogba (82.8% accuracy, 59.1 per game), although plenty of that is down to team style.

Four Champions Leagues in seven years and the man to end Lionel Messi and Cristiano Ronaldo’s duopoly on the Ballon d’Or, Modric would be a hell of a statement signing for Solskjaer’s side.

Linked with a move to Inter last summer, there are hints Madrid are looking at a post-Modric future in midfield, especially if Pogba was to move in the other direction. Toni Kroos, rather than Modric, has recently signed a new deal, while the rise of Dani Ceballos will give him extra competition.

What exactly would he bring to United’s midfield? Suffering a World Cup hangover, his overall 2018-19 La Liga stats aren’t a portrait of the Croatian at his best, although he actually had his most prolific campaign in terms of combined goals (three) and assists (six).

Last season, he averaged 1.1 shots per game, 1.6 key passes, 1.4 tackles, 55.6 passes per game and a passing accuracy of 88.9%. That’s down on the offensive metrics in comparison to Pogba, but his tidier passing would presumably give them more control.