The stats that show Ander Herrera’s improvement under Jose Mourinho 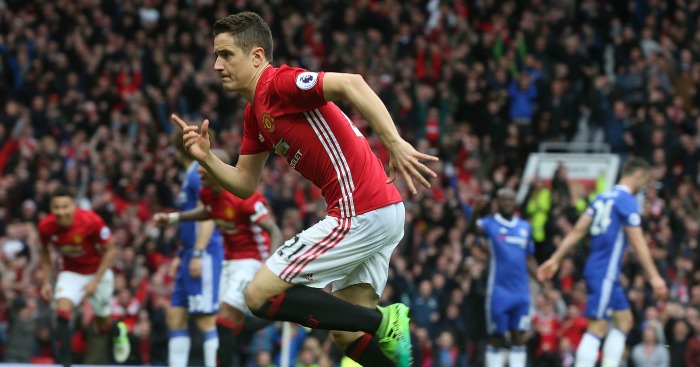 Ander Herrera underlined his importance to Jose Mourinho’s Manchester United with a man-of-the-match performance in the Red Devils’ 2-0 victory over Chelsea on Sunday.

A weakened United team stunned the Premier League leaders at Old Trafford, with Herrera providing an excellent assist for Marcus Rashford’s early opener before scoring the second himself via a deflected shot from the edge of the area.

While his attacking contributions were notable, the Spaniard’s defensive work was equally important as the midfielder completely shackled Eden Hazard, who was largely anonymous.

Ander Herrera literally not letting Eden Hazard out of his sight. pic.twitter.com/ZPmsKLtsMY

The display encapsulated his revival at United this season.

Herrera was often deployed high up the pitch under Louis van Gaal, tasked with creating opportunities in the final third, but the 27-year-old has flourished since being moved into a deeper role under Mourinho.

“I am so happy to be a bit more of a defensive player than last season,” he told The Telegraph in February. “I can share my energy with the team in that position. [Mourinho] has been great for me, but not just for me, the team as well.”

In fact, when comparing Herrera’s stats from this season to last, it becomes apparent that his all-round game has improved, not just his defensive contribution.

Only Herrera’s goal output is so far down from last season, but in every other category his statistics have improved. He has been described as “phenomenal” by Mourinho.

Such has been his improvement, in fact, that Spain manager Julen Lopetegui rewarded him with a senior international debut in November.

Mourinho may have attracted plenty of criticism since taking over at Old Trafford, but he deserves plenty of credit for his transformation of Herrera.