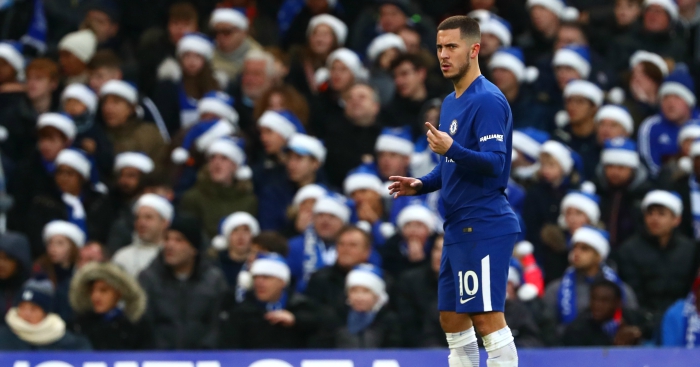 Eden Hazard has stepped up his performance levels for Chelsea again this season, proving that he deserves to be mentioned in the same breath as the world’s greatest.

After a sluggish start to the season, mainly due to injury, the Belgian has stepped up his Chelsea showings in the last couple of months.

His return to form has coincided with a run of eight victories in the last 10 Premier League games, highlighting how important the attacker is to Antonio Conte’s plans.

In comparison to last season, the improvement is glaring; Hazard is averaging more assists, shots and key passes than last campaign.

He has also increased the number of dribbles he’s producing as well as continuing to score at a consistent rate.

If you were going to be picky you could argue that more goals are needed to propel him to the levels of Lionel Messi, Cristiano Ronaldo or Neymar. But when a player is improving nearly all aspects of his game year-on-year, it’s hard to judge him too harshly. 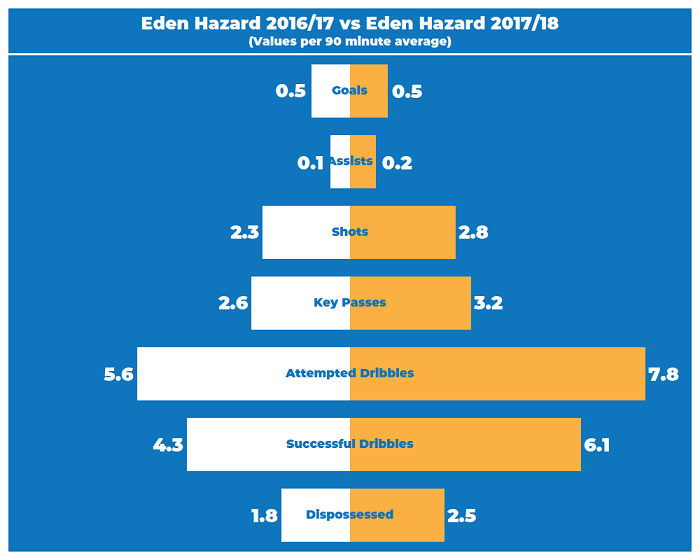 At first glance, the stat showing that Hazard has lost the ball more could be interpreted as a negative. However, this season has seen Antonio Conte tweak his formation slightly meaning that the attacking burden of the team lays primarily at the Belgian’s feet.

The change from a 3-4-3 to a 3-5-2 gives Hazard a free role just behind the striker, tasked with weaving his magic and producing the majority of the team’s chances.

The increased number of dribbles shows that he has taken on this new responsibility in his stride, so losing the ball more often would be expected.

Surely the forward’s best asset is his dribbling ability, which is unrivalled in the Premier League. He has completed the most dribbles in the division this season, averaging 6.3 successful dribbles per 90 minutes. West Ham’s Arthur Masuaku is second on the list, with Sofiane Boufal from Southampton completing the top three. 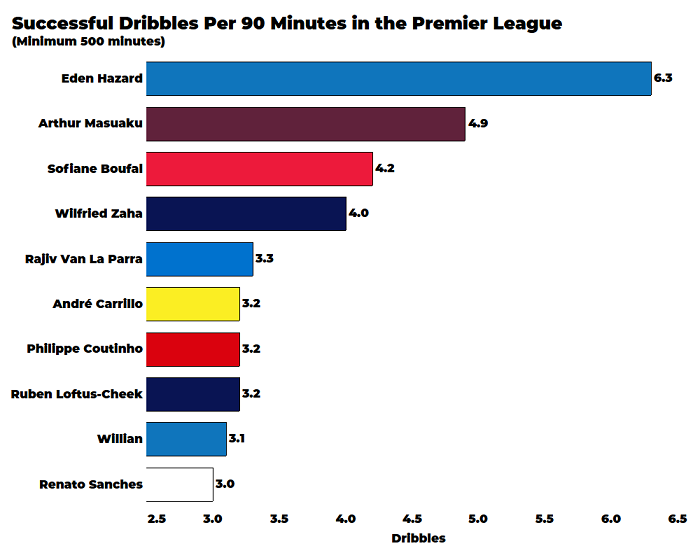 A particular highlight from this season was midway through the first half of Chelsea’s game at Anfield in November, when he received the ball from Marcos Alonso in the centre of the pitch. He had his back to goal, with an entire Liverpool midfield and defence between him and Simon Mignolet.

Close behind him was James Milner, the former England man pressuring him as is the norm with Jurgen Klopp’s team. Hazard simply received the ball, shielded it, and in one smooth motion dropped the shoulder, leaving Milner running in the opposite direction.

Now with a bit of space, Hazard turned and slowed the game down a little. He looked up for an option, spreading his arms as almost as if to say, ‘Am I going to have to do this by myself?’.

Jordan Henderson then quickly sprung forward at the Chelsea attacker. Hazard stopped almost entirely, squaring up the Liverpool captain. After offering a glimpse of the ball, Henderson took the bait and threw a leg at it.

Hazard of course knew what was coming, and with a quick drop of the shoulder he was away, an extraordinary show of acceleration taking him around the man with ease.

He was now running fast at the centre of Liverpool’s defence. Ragnar Klavan and Alberto Moreno pushed out to try and stop the situation, but it was too late: Hazard played a defence-splitting pass to the onrushing Danny Drinkwater.

It was just a shame there was no finish to what surely would have been the assist of the season.

It was just a short period of play, no longer than 10 seconds, but it displayed everything brilliant about Hazard. His low centre of gravity, offering the defender a glimpse of the ball before simply taking it away again, his audacity.

Gary Neville once famously said that Chelsea defender David Luiz was a “PlayStation player”. The same could be said about Hazard, who, when in full flow, is like watching someone play a video game.

If rumours of a summer transfer to Real Madrid are true then it will be a shame not just for Chelsea fans, but for the Premier League as a whole. On his day, Hazard is simply a delight to watch.