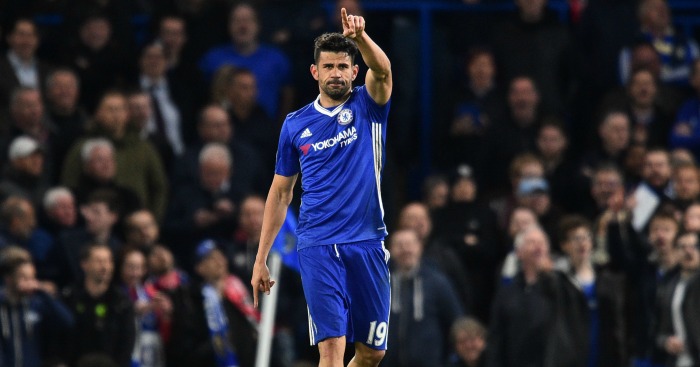 Diego Costa reached a personal milestone on Tuesday night as the Chelsea striker passed 50 Premier League goals with a brace in the 4-2 victory over Southampton.

After being dropped to the bench for the FA Cup semi-final win over Tottenham, Costa came back with a bang – his second goal in particular was brilliant to watch.

But it was with his first – a header from Cesc Fabregas’ cross – which brought up half a century of goals in England’s top flight.

Diego Costa’s back on the scoresheet & back in the race ? pic.twitter.com/Z1Y94RtnEK

Arriving from Atletico Madrid in 2014, the 28-year-old’s time in west London has certainly not been without its controversy, with the Spain international developing a reputation as the league’s best pantomime villain.

Plus, there was the reported fallout with Jose Mourinho last season and the tension with Antonio Conte after Costa was linked with a January move to the Chinese Super League.

But throughout all of this, Costa has also maintained his reputation as a reliable goalscorer, and his stats remain among the best in the Premier League.

Most impressively, his goals have won more points than any other player in the division.

– Costa’s 19 Premier League goals this season have been worth 15 points – more than any other player in the division.