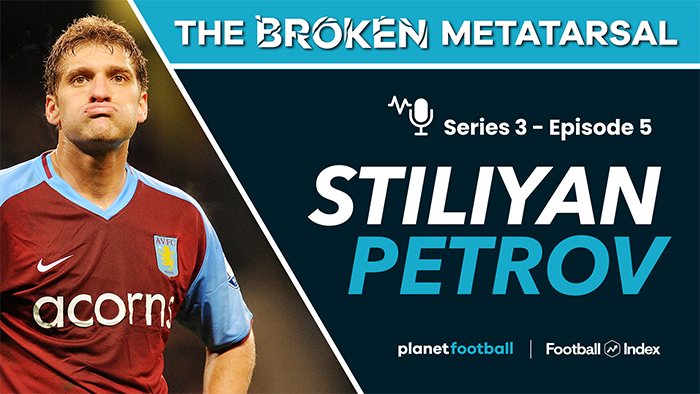 Stiliyan Petrov earned himself hero status on both sides of the border at Aston Villa and Celtic – and we spoke to him all about his amazing career on the latest edition of The Broken Metatarsal podcast.

Petrov joined Celtic from CSKA Sofia in his homeland when he was still a teenager and understandably took time to adapt to life in Scotland, not speaking any English at a time before player liaison officers were a thing.

Petrov’s team-mate Milen Petkov turned down the same move because the money on offer wasn’t good enough, but Petrov took the deal and says he genuinely struggled just to pay his bills during his early time in Glasgow.

But a security guard at Celtic, Brian, proved to be crucial to the success Petrov would go on to achieve in Britain, helping the Bulgarian learn the language in the most unusual of ways – by letting him work on his wife’s burger van.

Petrov explains how picking up phrases allowed him to assimilate in the dressing room at Parkhead, leading to a hugely successful period at the club, in particular under Martin O’Neill.

Petrov would later become the Northern Irishman’s first signing at Aston Villa and also explains how that move came about at the 11th hour and, among plenty of other gold, why Robbie Savage was “just a nonsense” to play against.

Pre-Interview chat about Stan 1m 13s
Martin O’Neill’s thoughts on lateness 3m 25s
Stan’s memories of the 2000s, and how it all began for him 4m
Nights out in Newcastle and moving to Glasgow 5m 20s
His early struggles at Celtic 13m 50s
How the tough times shaped him & massive phone bills 16m 40s
The friendship with a Celtic security guard that helped him 19m 18s
The burger van story and learning the language 20m 31s
What it’s like playing at Celtic Park 23m 54s
Martin O’Neill & getting fit 25m 47s
O’Neill improving Stan’s contract without being asked to 29m 21s
The Old Firm 30m
Deciding to move to the Premier League 33m 27s
Almost signing for Portsmouth 36m 42s
Knowing O’Neill when others didn’t 39m 21s
The Premier League players that stood out 41m 50s
– Steven Gerrard
– Frank Lampard
– Paul Scholes
The Premier League players who might stand on him 44m 16s
– Danny Murphy
– Robbie Savage
THAT goal against Derby 45m 55s
Positional change from O’Neill 47m 52s
Favourite moment of unity 50m
Villa’s demise 51m 38s
Illness, and how Player 4 Player can help players after retirement 53m 22s