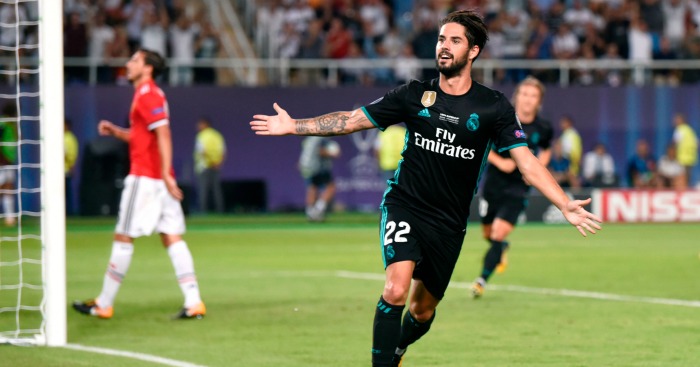 Transfers can fall through for any number of reasons in football – as the likes of Manchester United and Liverpool can attest to.

With personal terms to be agreed and a medical to be passed even once two clubs have settled on a fee for a player, every manager will have tales of signings they just missed out on.

Some, however, will have more unusual stories than others…

After an Isco goal helped Real Madrid beat Manchester United in the UEFA Super Cup in 2017, an ESPN report claimed the Red Devils actually rejected the chance to sign the Spain international when he was still a Malaga player.

A senior club scout was sent to monitor the midfielder before eventually concluding: “He’s good but not quite quick enough, and his head is too big for his body.”

“We looked at Jordan Henderson a lot and Steve Bruce was unfailingly enthusiastic about him,” Sir Alex Ferguson wrote in his 2013 autobiography.

“Against that we noticed that Henderson runs from his knees, with a straight back, while the modern footballer runs from his hips.

“We thought his gait might cause him problems later in his career.”

Henderson went on to join Liverpool instead from Sunderland, establishing himself as a regular for both the Reds and England.

However, after playing an average of 35 Premier League games per season in his first four years at Anfield, Henderson began to suffer from heel and foot injuries, and was later diagnosed with the incurable condition plantar fasciitis.

Alex McLeish had been working for weeks to get Boyd to Nottingham Forest in 2013. And on deadline day during the winter window, the Scottish manager looked set to finally get his way when the midfielder underwent a medical.

However, “12 hours after his medical”, according to Barry Fry, Forest pulled out of the deal, citing an “inconclusive eye test”.

“Total disgrace, the whole thing,” Posh chairman Darragh MacAnthony tweeted. “He’s played 300 games and scored from the halfway line the other month, but Forest say he has an eyesight problem. The whole thing stinks.”

Posh director of football Fry pinned the blame on Forest owners, the Al-Hasawi family: ”I don’t know how they can call themselves fit and proper.

“Alex has been a gentleman over this, it was the owners who pulled out and they are a disgrace to the game.”

Sticking with Forest, in 1990 they agreed a £1.15million fee with Leicester City for Scotland midfielder Gary McAllister.

Brian Clough was keen to sign him, but when the then-25-year-old turned up at Forest’s training ground wearing cowboy boots, things went awry.

“Who do you think you are young man? Bloody John Wayne?” asked Clough. He went on to ask a series of questions about McAllister’s private life during a meeting which the player later described as “pretty bizarre”.

Forest pulled out of the deal and McAllister went to Leeds instead, where he became a title winner two seasons later, one year before Forest were relegated in Clough’s final campaign.

In January 2014, Leeds owners Gulf Finance House were trying to sell the club to Massimo Cellino.

The team, meanwhile, was knocked out of the FA Cup by Rochdale and lost 6-0 at Sheffield Wednesday, with GFH reportedly trying to sack manager Brian McDermott at half-time.

The Yorkshire Evening Post’s Leeds United reporter Phil Hay tells the story like this: “One of the messages that came back (perhaps in jest, though who can be sure?) was that Barnes had a lower rating on Football Manager than Luke Varney. That is Prozone analysis Toy-Story style.”

Later that same month, Varney refused to play for Leeds before being loaned to Blackburn, while Cellino, upon completing his takeover, was barricaded inside Elland Road by fans angry at the Italian’s attempt to fire the McDermott.

Barnes, meanwhile, joined Burnley, helping them into the Premier League.

The former playboy forward looked all set to join Liverpool in 1972 after a deal had been agreed with Huddersfield, only for him to fail a medical at Anfield due to, officially, high blood pressure.

However, the real reason was apparently a sexually transmitted infection.

Either way, Bill Shankly told Worthington to come back in a week for another test.

Subsequently, according to the Huddersfield Examiner: ‘A week later – after seven days of carousing, which involved two Swedish blondes, a night with Miss Great Britain, a casual encounter at the airport with a woman whose name he didn’t catch and a night with a young Belgian beauty – he retook the medical.

‘His blood pressure was even higher. A bemused Bill Shankly cancelled the deal and sent his mother some flowers.’

In the summer of 2015, De Gea looked set in 2015 to complete the move he always appeared destined to make.

However, Manchester United and Real Madrid left it until the final day of the summer transfer window to agree on a deal, with Keylor Navas heading in the opposite direction – and it never got over the line, leading to much finger pointing from both sides.

Real said: they “did everything that was necessary at all times to get these two transfers completed,” but United claimed the Spanish club “didn’t upload David’s documents to the Spanish league in time” and added the club “acts appropriately and efficiently in its transfer dealings”.

We may never find out exactly why the transfer never happened – but Manchester United fans were extremely glad it didn’t.