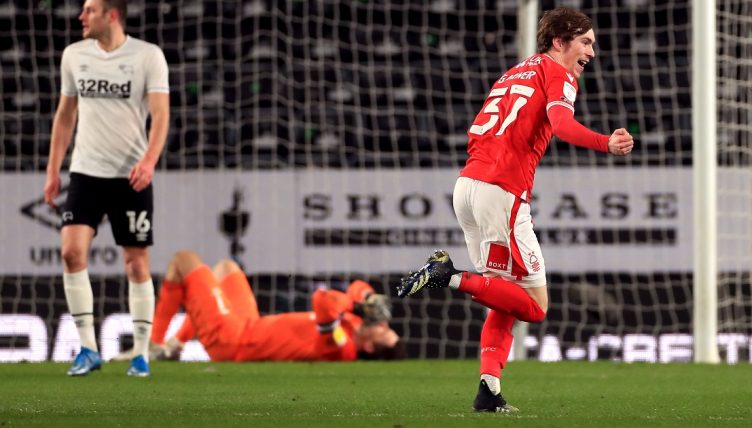 The 19-year-old midfielder has scored in the youth set-up for his parent club, and England’s Under-21s, but his opener in the East Midlands derby was the first senior goal of his career.

Garner showed some bright moments across 20 appearances for promotion-chasers Watford in the first half of the season, but his loan was terminated in January after he’d fallen out of favour following a change in the Hornets dugout.

That gave him an opportunity to sign on loan for Nottingham Forest, and he’s already got fans demanding his signature in the summer.

“I’m really pleased for James Garner because his performance got better as the game went on,” the ever-considered Forest boss Chris Hughton told reporters after the match.

“I thought he could have done better in the first half despite the goal but he certainly got stronger as the game wore on.”

His goal, a well-struck first-time effort into the bottom corner, wasn’t enough for his side to take all three points on the night, with Colin Kazim-Richards equalising late on for Wayne Rooney’s Rams to make it 1-1 on the night.

The Times’ Chief Sport Writer was present at the stadium and was one of many impressed by the youngster’s performance:

Garner says he’s open-minded” about his future. “I don’t know what will happen next season, whether I will stay with the first team (at #mufc), have another year in the Championship or go abroad. My dream is to play in the Premier League. It’s everyone’s dream.”

Here’s a selection of comments from Forest fans:

Slept on it thoughts. A point closer to our target, disappointed not to win but nice they've not beat us. Garner sublime, Knockaert made Buchanan look like a pub player and Cafu's performance has slipped under the radar. An absolute battering ram in the middle. We move. #NFFC

Obviously gutted we didn’t get the win tonight as I thought we managed the game brilliantly but we have made massive steps under Hughton. I say it in every tweet but we have to get Knockaert, krov and Garner back nxt season, they get better and better with every game! #nffc

A strike from the edge of the box, one Marshall should have done better with, but he'll take it!#NFFC #MUFC pic.twitter.com/rONJhplwUp

If I ever see James Garner at a Courteeners* gig, I’m buying his beers all night whilst carrying him on my shoulders so he’s got the best view possible 😍