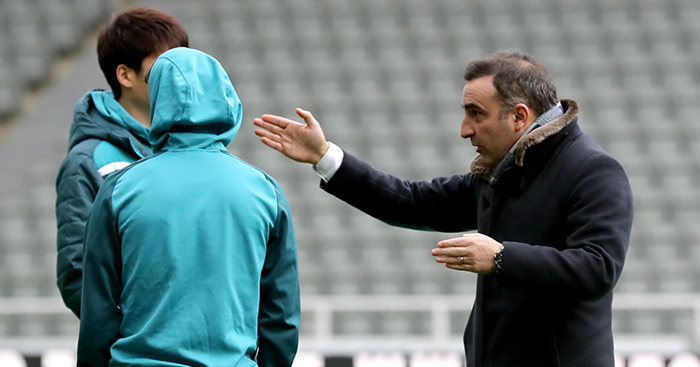 Swansea City are now unbeaten in 10 games under Carlos Carvalhal, but just what has the Portuguese coach done to turn around a team that looked destined for relegation from the Premier League?

Swansea had been in the relegation zone since the beginning of November and were rock bottom, five points from safety, when Carvalhal was appointed in late December.

They are now in 16th place and are the form side in the Premier League in the last five matches (no team has more than their 11 points). Initially seen as an uninspiring choice, Carvalhal has proven an overwhelming success thus far.

A 0-0 draw at Sheffield Wednesday in the FA Cup on Saturday extended the Welsh club’s unbeaten run to 10 games in all competitions, and although they will be disappointed not to have beaten Championship opposition and reach the quarter-finals at the first attempt, it was another sign of their new-found resilience under Carvalhal.

Remarkably, despite facing Tottenham, Arsenal and Liverpool since the 52-year-old took charge, Swansea have lost only once in seven Premier League games and only once in 12 overall under Carvalhal, who did not feel the need to sacrifice the FA Cup to focus on a relegation battle. 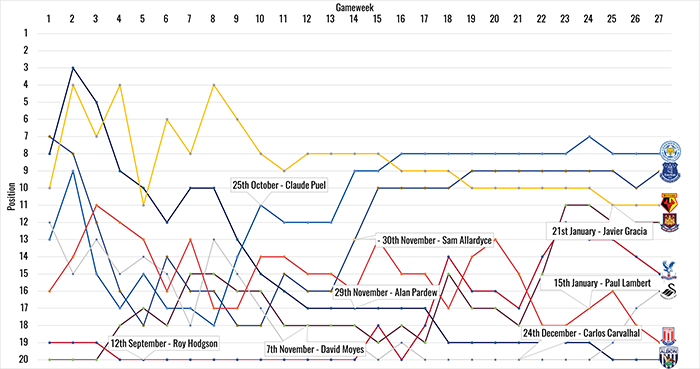 The constant stream of managerial appointments in the lower half of the Premier League is testament to the desperation of clubs to remain in the top flight. At least one managerial change has taken place in every month of the season from September onwards so far, including eight of the bottom 12.

It’s clear that chairmen are prepared to take the short-term hit of replacing the man in charge as opposed to potentially going down and losing out even more financially.

When looking at the immediate results, the apparent new manager ‘bounce’ is very much a reality. Seven of the eight appointments this season have enhanced their side’s points per game total, although it’s probably too soon to judge Paul Lambert and Javier Gracia in the short times they’ve had at Stoke and Watford respectively.

Carvalhal has improved the most of any new manager, gaining 14 points from his seven in charge, winning four and drawing twice with a single defeat to Tottenham.

Although that’s most likely an unsustainable record, if he can match that points total in Swansea’s last 11 games, they’ll remain a Premier League side next season. 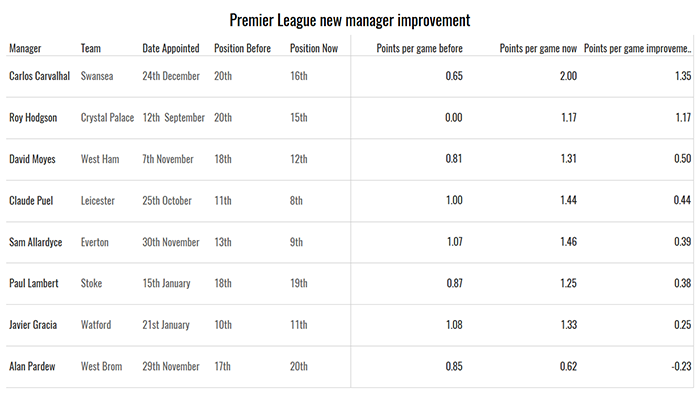 The main area Carvalhal has targeted is in defence, where they’ve tightened up considerably. They’ve conceded just six times since he took over in the league; only Manchester United (3) and Tottenham (4) have a better record in that time.

They’ve predominately gone with a 5-4-1/5-3-2 formation in recent games, sitting deep and looking to score through counter-attacks and set pieces. The three centre-backs Mike van der Hoorn, Federico Fernandez and Alfie Mawson have been solid and offer a threat at the other end of the pitch as well.

Carvalhal said after the Liverpool game that “it was like watching an F1 car stuck in rush hour traffic”. Looking at Swansea’s average positions from the game, it’s easy to see how a car could stuck in the player traffic in the centre of the park:

The back three are within the width of the penalty area, and the two sitting midfielders (Fer and Ki) are just in front of them, offering great protection.

In fact, the entire team, bar Jordan Ayew as the lone striker, are in their own half, making it difficult for the opposition. Swansea are utilising the ‘defence first’ cliché in their fight to avoid the drop.

Defend from the front

At the other end of the pitch, Swansea have also improved. They’ve scored nine times since Carvalhal came in, just one less than the 10 they’d scored in the 20 games previous.

It’s not a massive improvement, but coupled with the team’s defensive reinforcement, it’s making a big difference.

The new manager must also be credited with the upturn in form of Jordan Ayew, who has scored three times in the last seven games having netted just twice all season before then.

But it’s not just his offensive work that is crucial for this Swansea side. The way he harasses defenders and leads from the front sets the tone for the rest of the team behind him.

His recent goal against Arsenal was a perfect example of this. There’s a reason that Carvalhal has chosen to leave Wilfried Bony and Tammy Abraham on the bench in recent matches; he wants the whole team to defend as a unit and Ayew is a big part of that.

In fact, he’s won more tackles than any other forward in the league. 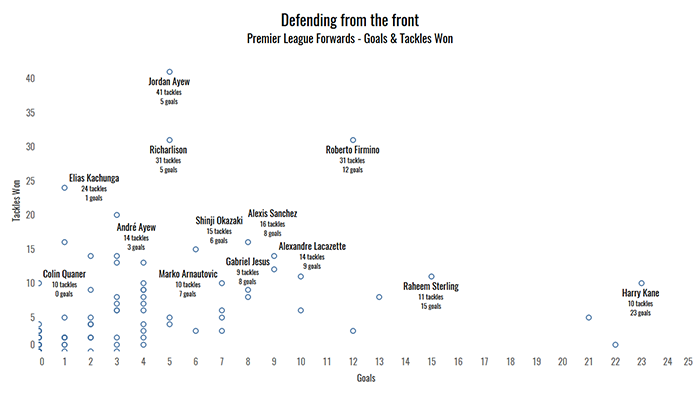 Relegation remains a distinct possibility, but the start to life under Carvalhal has provided great optimism around the Liberty stadium.

If they can keep up the defensive improvement, and in-form players like Ayew continue to shine, there’s no reason why they can’t survive another season in the Premier League.